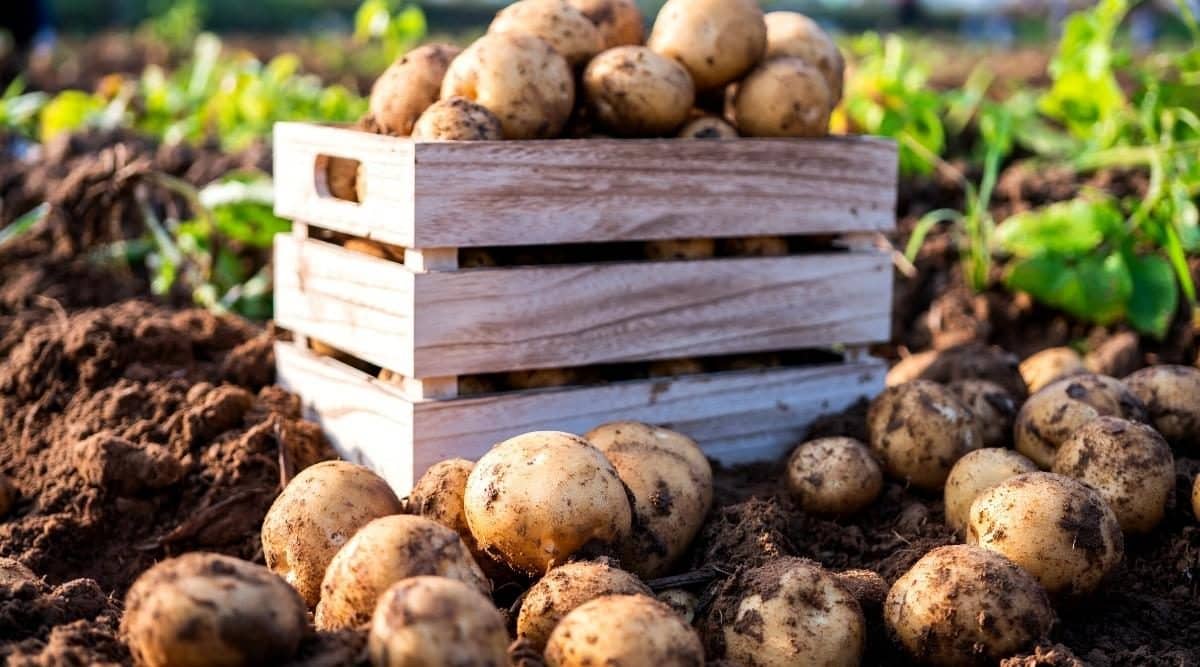 The potatoes you planted early in spring are now flowering. Soon it will be time to harvest your hard earned efforts. If you leave the potatoes in the ground, will they grow back next year? Will they produce more or less if overwintered in the soil? Are potatoes considered annuals or perennials?

Potatoes have been grown in gardens for thousands of years and were originally cultivated by Incan People in the Andes Mountains of South America. Colonialism spread potatoes to Europe via the Spaniards in the 1570s. The adaptable, nutritious tubers soon became widely planted across the world, moving from Europe, then to North America as European settlers arrived, and to India and China.

Potatoes now occupy an important spot in many cultural cuisines, including Italian gnocchi,  American French Fries, and Chilean Milcoa. Potatoes’ success across the world may be attributed to many factors – they are highly nutritious, easy to grow, adaptable to many growing climates, and produce more food per acre than other staple grain crops, and are extremely versatile in the kitchen.

Where Do They Grow Naturally?

They do not compete well with weeds or crowding from other plants. Potatoes thrive in fertile soil, however, they will tolerate most any type of soil as long as it is well drained. They do not grow well in heavy clay soils with poor drainage.

As they were cultivated across Europe and the rest of the world, farmers selected varieties that performed best in their microclimate, leading to many of the varieties we have today. Today, Peru is home to the world’s largest potato gene bank.

Scientists rely on the wide range of genetic diversity cataloged there to breed new potato varieties with traits that help them thrive in ever changing challenges such as climate change and drought.

Potatoes are part of the Solanaceae, or Nightshade family, along with peppers, tomatoes and eggplant, though they are the only member with edible tubers. Potato flowers resemble tomato and pepper flowers and are usually purple or white.

Most potato varieties die back after flowering. Some varieties do grow inedible potato fruits that look like super-mini green tomatoes. Seed is produced from some potato varieties and is used as a source of new genetic material for potato breeders.

These seeds are not used by the average gardener. Most gardeners and commercial potato farmers plant them from “seed potatoes” which are just whole potatoes from the prior year’s crop.

Seed potatoes are planted about 6” deep in early spring when temperatures are still freezing at night but the soil is not frozen anymore. The green growth emerges a few weeks later as the soil warms. The sprouts emerge more quickly in warmer soil.

They are frost-tolerant plant, meaning their green growth can withstand a bit of early spring frost and will even regrow if the greens are completely frozen. The tubers are not frost-tolerant and are damaged at freezing temperatures.

Seed potatoes have been selected for the best traits with no disease or pest damage. When you purchase seed potatoes, ensure the tubers have been certified disease-free.

Planting diseased seed potatoes can introduce pathogens into your garden that are difficult, if not impossible to remove from the soil and plant debris.

Seed potatoes are generally grouped and sold into three categories based on approximate days to maturity: early, mid and late season. Early season varieties can be ready to harvest in as little as 8 weeks from planting.

New potatoes are thin skinned and delicately flavored. Mature early season varieties are usually ready around 70-80 days and include varieties such as Caribe and Dark Red Norland.

Midseason potatoes mature 80-100 days, and include Yukon Gold, Kennebec, and some Russets. Late season varieties are ready at 100-120 days and include most all fingerling types.

Choose the best potato varieties for your garden based on your garden’s frost-free days and how you want to cook and eat them. They are also grouped by appearance: fingerling, yellow-skins, red-skins, white-flesh, yellow-fleshed, and russets.

Culinary groupings can include waxy, starchy, or how well a potato variety stores. Read the variety description to learn which potato is suited for which use.

Are They Annuals or Perennials?

The green growth will die back after flowering and new green growth would come from the prior season’s tubers. Growing them this way does not benefit the gardener, as the undug potatoes will grow tangled and small, mixed with rotten tubers from prior year’s growth.

Since they are not a particularly ornamental plant, perennial potato growing has very little use to humans.

Why Do We Dig Potatoes?

Potatoes are grown as an annual crop in most parts of the world. Most importantly, when left in the ground over winter, they will freeze when the soil freezes and turn to mush. Even in climates where they will not freeze in the soil, digging potatoes up is an important part of growing them.

Aside from harvesting to eat them, digging allows the gardener to inspect the crop for disease or damage. Digging and replanting them the following year maximizes each tuber’s production of new tubers.

If left in the ground in non-freezing climates, they will continue to grow and crowd each other, producing small, entangled tubers. The overall production will be less than if you had dug and replanted them.

Digging allows for storage in a controlled environment (such as a root cellar). This is a more reliable method of storage where the tubers can be monitored for pests. It’s better than storing them in the soil where they are at risk from vole, mouse, gopher, and insect damage.

Potatoes are an excellent garden crop as they are easy to grow. Growing your own in your garden gives you a wider range of choices to flavors, textures, and colors than what is commonly available at the grocery store. Plus, the flavor of freshly dug potatoes cannot be beat! Plan on planting them as an annual crop and digging all tubers after the plant tops die back, no matter what climate you are growing in. Replant seed potatoes every year to continue to enjoy these versatile vegetables.

How to Grow Sweet Potatoes in Containers in 8 Easy Steps

15 Vegetables That Can Grow in the Arizona Heat

Can You Grow Potatoes and Tomatoes Together as Companion Plants? 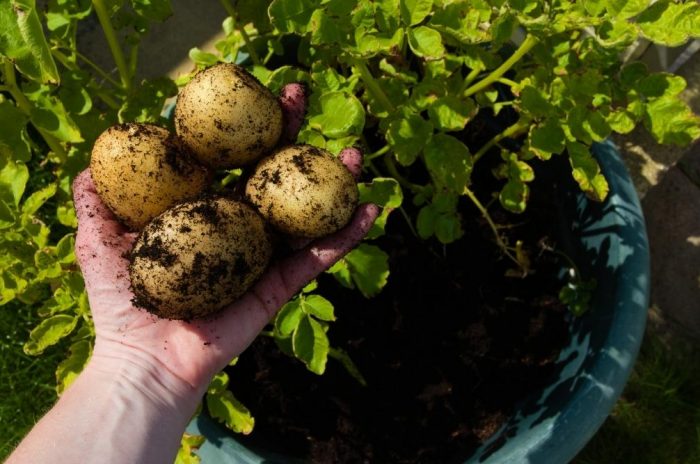 How to Grow Sweet Potatoes in Containers in 8 Easy Steps

15 Vegetables That Can Grow in the Arizona Heat

If you live in Arizona, you know that growing anything in your garden can be a huge task, especially vegetables. But the good news is, there are several veggies that can thrive in the hot, sunny Arizona climate. In this article, gardening expert and former organic gardener Sarah Hyde walks through her favorite vegetables that you can grow in Arizona!

Can You Grow Potatoes and Tomatoes Together as Companion Plants?

If you are considering growing tomatoes and potatoes in the same garden together, there are a few factors you'll need to consider. While both of these plants are quite popular in many amateur vegetable gardens, do they make good companion plants when grown alongside one another? Read on and find out if you should grow these plants side by side!

How to Plant, Grow, and Care For Cucumbers

From beginners to experts, Cucumbers are one of the most popular vegetables to grow in your garden. They have many uses, and multiple varieties that make them suitable for most climates. In this article, organic gardening expert Logan Hailey walks through step you'll need to follow in order to plant, grow, and care for Cucumbers.

How to Trellis Your Tomatoes in 7 Easy Steps

Trying to trellis your tomatoes this season, but aren't quite sure where to start? Trellising tomatoes is good for many reasons, including the fact it can help free up room in your garden. In this article, gardening expert and tomato enthusiast Merideth Corhs takes you through seven simple steps for perfectly trellised tomatoes this season.