When is it Too Late to Hill Garden Potatoes?

If you are thinking of hilling potatoes this season but are wondering if you are too late in the season, you've come to the right place! In this article, gardening expert and former organic farmer Sarah Hyde examines at what point in the season it's too late to hill potatoes, and when it's optimal to do it! 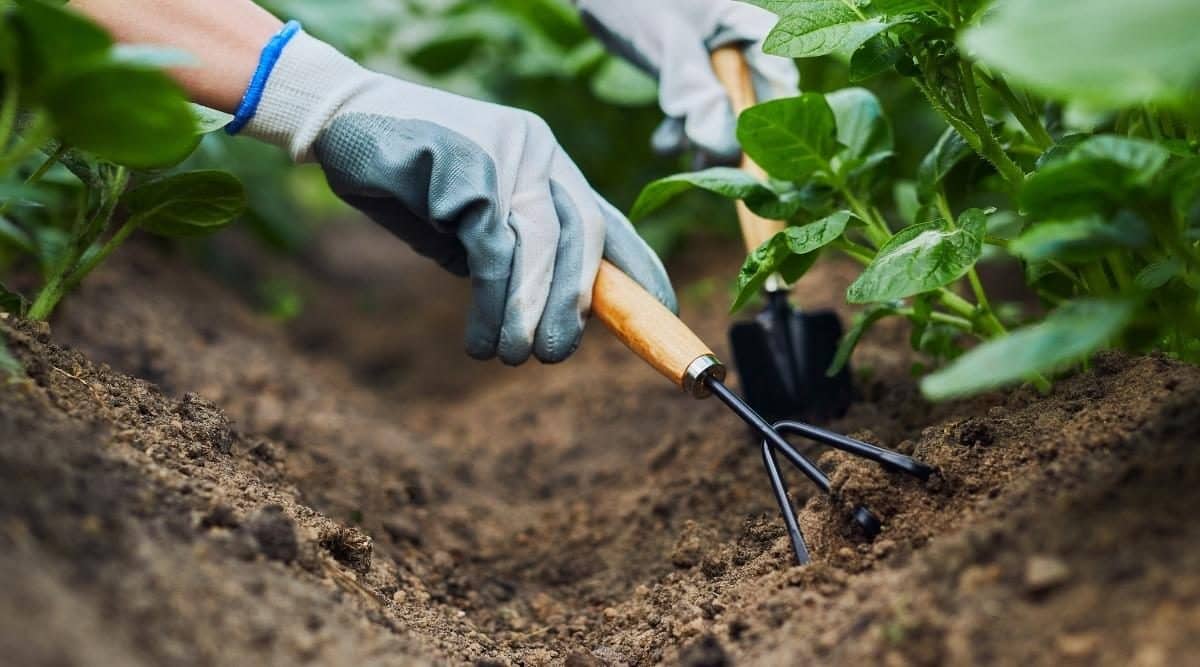 Potatoes are a staple crop across cultures and are adaptable enough to grow in many different climates. Potatoes are easy to grow in fertile, well drained soil. Although they are fairly low maintenance, they have one growing practice that is different from most other crops – hilling.

Though potato plants will grow without being hilled, there are so many benefits to hilling that gardeners should not neglect the task. Hilling can be accomplished with soil or mulches, in the ground or in containers.

Though potatoes are widely eaten and grown everywhere, they can still be a bit mysterious to the new grower. They can be a challenge to grow since all of the potato formation occurs out of sight, under the soil. So when is it too late to hill potatoes? What if you forgot to hill them at all? Let’s dig in and find out!

Potatoes need to be hilled as the stems grow vertically for the first month or two in the spring, until flowering. Tuber formation begins when the plants start to flower. If the plants are starting to die back then hilling potatoes at that time will not produce any more benefit.

Hilling has many benefits. And now you know that ideally it should be performed in the spring. If you plan to hill them later in the season, there’s no real benefit to doing so. Let’s learn a little more about potatoes, how they grow, and why hilling is a beneficial task to take on each season with your harvest.

Potatoes are grown as an annual crop and a member of the Nightshade (aka solanaceae) family, along with tomatoes, peppers, and eggplant. They have dark green leaves that emerge from the soil in early spring when soil temperatures warm.

Potatoes have small, purple or white flowers that appear a few months after planting. Some varieties will produce fruit and seeds from the flowers, but most cultivated varieties will not. Expect potatoes to be ready to harvest anywhere from 80 to 120 days, depending on the variety.

They are relatively easy to grow, provided they have plenty of nutrients and well draining soil. While they appreciate fertile soil, raw manure is discouraged for fertilizing. This is due to the fact it can lead to disease on the tubers.

Well-drained soil is extremely important, as they cannot grow well in heavy, water-logged soil. They prefer to be kept weed-free during their growth and do not compete with weeds well. Weeds may also attract pests to your potato patch.

Potatoes are frost tolerant, but not completely frost-hardy. They are most susceptible to frost damage early in the spring. You’ll notice the green leaves emerge during warm days when nights are still freezing.

The green growth can be frozen back a few times and will continue to resprout. They use energy stores in the seed potato for more leaves.

If the leaves are frozen too many times, eventually the seed potato will be used up and the plant will die. This is one reason it is fine to wait until mid-spring to plant. This way you avoid the possibility of frost being a nightly occurrence. Also, note that if the tubers freeze they will turn to mush and not be viable for planting.

Potatoes are planted from seed potatoes. These are potatoes saved from the prior year’s crop that show excellent variety traits, are disease-free and undamaged. Every seed potato planted should have at least 3 eyes, since that is where the sprouts and roots emerge from.

Seed potatoes can be cut prior to planting and the pieces can be planted, in a process called “chitting.” The cut sides must dry prior to planting, so this method requires more planning. However, chitting can be used to produce more plants per pound of seed potato.

The seed potato is planted 4” to 6” deep in the soil, roughly 16” apart. Each whole seed potato or piece produces a new plant. The plants grow rapidly in spring as the weather warms. Flowering occurs when potatoes’ vertical vegetative growth stops and they start to put energy into tuber formation.

New potatoes grow from the underground portion of the stems, in an area 1 to 2 feet in diameter around the center of the plant. As they form, you may see the soil bulge up and even crack on the surface. This is a great indication that they could use another round of hilling.

Potatoes are ready to harvest when the plants die back completely. Be sure to harvest all potatoes before the soil freezes in the fall. Frozen soil will be difficult to dig, and the potatoes themselves should not freeze.

The original seed potato will not be part of your harvest, since the carbohydrate stores were used up by the initial spring growth, and it has turned to mush (if you can even find it!)

Hilling means to heap soil up against the stems of the potato plants. A bow rake or square-bottomed hoe work well to hill the soil efficiently. Straw or other mulch can be used in place of soil, though make sure it is thick enough to cover the base of the plant well.

Hilling is best started when the stems are about a foot tall. Continue every few weeks until they start to flower, or shortly afterwards if you have enough soil or mulch to keep hilling. If you run out of loose soil to mound up, don’t panic, the hilling that has been done should be fine to get a good crop.

Why Should I Hill My Potatoes?

Hilling is beneficial, aside from giving you a good work out! Crops tend to do better when they are hilled for many reasons: it helps increase harvest yield, it prevents greening of the tubers, helps with weed control, and provides frost protection. Let’s look at the biggest benefits of hilling your potatoes this season.

Hilling helps crops become larger. Potatoes grow from the underground stems, so the more of the stem that is under the soil, the more space for them to grow. Keep in mind that fertile, well-drained soil, few weeds, and adequate water have an important impact on the overall harvest too.

Hilling helps cover any potatoes that are close to the surface from the sunlight. Potatoes exposed to sunlight, even through a light layer of soil, turn green. Green potatoes produce a chemical called solanine that is poisonous to humans in small amounts.

Hilling also helps keep the weeds under control right next to the plant. If hilling with soil, the action of scraping up the soil against the stems with a hoe or rake effectively cultivates the weeds at the same time.

If you use a thick mulch it will smother the small weeds. Note that if the weed pressure is very bad, it is best to hoe or hand pull the weeds prior to mulching with straw, since many weeds are aggressive enough to grow right through the straw.

Hilling also can help protect your plants from frost damage from an unexpected or late frost in the spring. In many climates, frost can occur as late as the end of May. By that time you probably have hilled your potatoes once or twice.

Any part of the plant that is covered by the soil is protected from the frost. If a late frost knocks the leaves back, the plant will regrow more quickly since it can regrow from the underground stems that have been hilled.

When is it Too Late to Hill?

Make sure the potatoes are sufficiently hilled before flowering occurs. After flowering is complete and the plants start to die back, any extra hilling will not make a big difference in preventing the potatoes from greening.

If you use mulch, periodically check to see that none has blown away, or there are no thin spots. Once flowering occurs, it is time to sit back and wait. The plants will die back completely, signaling it is time to start harvesting.

What if You Forgot to Hill Your Crop?

Summer is busy, and it is common for many potato gardening tasks to go untended. Hilling should be at the top of your garden to-do list, since the benefits to the crop are many, and the initial expense of seed potatoes can be significant.

However, if you were too busy vacationing this season, you may not be totally out of luck. Completely unhilled potatoes will still form some tubers, though the harvest may not be as impressive as those that have been through the hilling process.

Dig after the stems have died back as you would hilled potatoes. Be cautious and scrupulous to remove any green potatoes from your stored harvest, and put hilling at the top of your task list for next year!

Potatoes can be a part of every garden, the extra work that goes into growing them yield delicious rewards. The major part of potato growing that differs from other garden crops is hilling, and the benefits are many. Try to hill them multiple times as they grow quickly in the spring though flowering, to get the most benefit from hilling.

Can You Plant Cucumbers With Peppers in Your Garden? 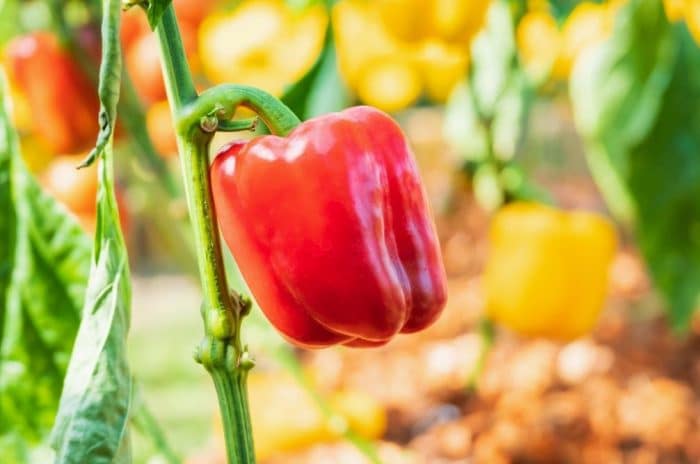 Do your garden grown tomatoes have some issues this season? Tomatoes can fall victim to many common issues, so understanding what can impact your harvest is critical. In this article, gardening expert and tomato enthusiast Merideth Cohrs walks through the most common problems that gardeners experience with their tomato plants.

Can You Plant Cucumbers With Peppers in Your Garden?

Are you considering planting cucumbers with peppers in your garden this season? Maybe you are wondering if these two veggies make decent garden companions? In this article, gardening expert and homesteader Merideth Corhs examines if it's a good idea to plant peppers next to your cucumbers this growing season.

15 Tips For Growing Carrots in Hot and Arid Desert Climates

Do you live in a hot and arid desert climate? If so, growing vegetables of any type can be a challenge! But having the right information before you attempt it can drastically help along the way. In this article, gardening expert and former organic farmer Sarah Hyde gives you her top tips for growing carrots in desert climates!