Should You Water Orchids with Ice Cubes?

Have you heard that you can water an orchid with just ice cubes? Perhaps you've even considered trying it out? Many gardeners tend to have mixed feelings on this topic. In this article, gardening expert Melissa Strauss examines if watering orchids with ice cubes is just another gardening fad, or something you should put into practice with your plants.

The question of whether to use ice cubes when watering your orchids has become quite the quandary. Some research has been done, with at least one legitimate study finding that there was no difference in the health of orchids watered with ice cubes versus other methods.

Still, some gardeners will argue that orchids are hot weather plants. They argue that the ice can damage the plant. They are not wrong, in a sense. Other naysayers claim that the amount of ice suggested for use in watering an orchid is simply not enough to sustain the plant.

While both of these arguments seem sound, many orchid owners swear by this method. As a gardener who tends to overwater myself, I also tend to agree.

Let’s examine the effects of using ice cubes to water an orchid from both angles. We will look at why this is a viable watering method, as long as you pay attention to a few minor details. You’ll also learn about more mainstream watering methods, and you can decide how to proceed with your own wonderful tropical plants.

In a nutshell, yes, technically, you can water an orchid using only ice cubes. Research shows that this is a viable practice, and it is probably the best practice if you have a habit of overwatering your houseplants. That said, not all ice cubes are equal, and the amount of water is an important factor.

For some, watering orchids with ice cubes could be the answer to the single greatest issue in orchid care, which is root rot. Orchid root rot is caused by overwatering. I have certainly killed my fair share of orchids in this manner on my quest to learn how to keep these wonderful plants alive.

Still, some very well-experienced orchid collectors will say that this is just a gimmick. Some will claim it’s intended to shorten the lifespan of the plant, so gardeners will end up buying more.

According to this study which was published by The Ohio State University and The University of Georgia, it was determined that watering orchids with ice cubes, when carried out correctly, does not shorten the lifespan or negatively impact the health of the plant. In fact, it was quite effective in avoiding overwatering.

The number one cause of death to orchid plants kept indoors is overwatering. In nature, orchids grow in trees, and their roots are completely exposed to the elements. They take in nutrients and water from rain and the air around them.

Keeping this in mind, it is not difficult to imagine why it is important to give an orchid plenty of air circulation around its roots. This, in turn, helps the plant’s roots to dry out between waterings.

When an orchid doesn’t have sufficient air circulation around its roots, or it is watered too often and not given an opportunity to dry between waterings, the roots will reach their saturation point and begin to weaken.

As the roots then begin to break down, they are much more susceptible to bacteria and fungi. The effect of this is given the blanket term ‘root rot.’ Although it can be caused by different factors, the underlying instigator is overwatering.

The first signs of root rot will typically be the actual roots becoming dark brown and mushy. They will also break apart very easily. You may be lucky enough to catch this early if you are repotting your orchid. However, chances are you won’t know it is happening until the damage becomes obvious above the potting medium.

The most obvious sign of root rot is yellowing leaves that weaken and drop. Most orchids will lose their oldest leaves at some point during the year. If the oldest set of leaves isn’t the only leaves affected, it is probably another issue. The only exception to this is deciduous dendrobium orchids which shed their leaves yearly in preparation for dormancy.

An orchid vendor came up with the idea a while back that by using only a few ice cubes per week, they could help novices to avoid overwatering. The theory is that the ice melts slowly, giving the orchid ample time to absorb all of the water. This is opposed to more traditional watering methods, being watered for a short time and then allowed to drain.

The recommended amount is roughly three cubes per plant. But what size ice cubes does this take into consideration? Since this would be difficult to get right universally, the best rule of thumb is that the amount of ice used should be about ¼ cup of water when melted.

If there is more than one orchid in a pot, each individual plant needs this amount of ice. The cubes should be set on top of the potting medium. As the ice melts, it will trickle through the roots of the plant and be absorbed. The slow absorption means that there is no water pooling in the pot, which is a great thing.

Note: Do NOT set the ice cubes on the leaves of the orchid. Pooling water can cause leaf rot. The cold of the ice can cause damage to the tissue of the leaves. This can also instigate leaf rot.

We understand that you may not be convinced of the merits of ice cube watering, and that is perfectly fine. You are in good company. Many orchid collectors agree that this is not the best way to water. Here are some other watering methods, along with their pros and cons.

This is typically accepted as the best way to water orchids. Immersing the container and roots in water for a few minutes allows the plant to absorb water without risking water pooling in the leaves and causing that dreaded rot.

It is very important to use a pot with excellent drainage. This method can be deadly to an orchid pot that doesn’t drain properly.

This method also makes fertilizing easy. It allows you to be sure that the plant’s roots are coming in contact with the fertilizer for long enough to absorb the nutrients.

Orchids love to be fertilized. During periods of growth, fertilize every 1-2 weeks. If you are using ice cubes, you will need to mix the fertilizer with the water you use to make those cubes.

The most common way to water most plants is by running water down from the top, over the roots, and potting medium. This is another valid method of watering orchids.

The only caveat here is that a properly potted plant has great drainage, and the container will not hold water for long to give the plant time to absorb it.

I’m going to go ahead and say that I do not recommend this method. If your orchid is kept in a very humid area, then you may be able to get away with misting it daily to keep it alive. However, most orchids live in rainforests. So, they regularly get a good soaking rain, which their roots soak up. Then, that is sent out to their leaves and flowers.

Another instance in which this might work would be a vanda orchid with completely exposed roots. If you can reach those roots with enough moisture by misting, your vanda might be ok. Vandas are a type of orchid that need a lot of humidity and heat daily, though, so those factors will make a difference.

In general, you would have to mist multiple times each day to sustain the amount of moisture it needs to absorb to keep it alive.

If the idea of watering your orchids with ice cubes just doesn’t sit well, there is very little harm to be done by using a different method. If your orchid is potted properly and you take care not to overwater, there is no reason to worry.

I can say that, for my part, I’ve never killed an orchid by using this method, but I have overwatered several by not potting them correctly or watering too frequently, particularly during their dormant season. Orchids are tricky in the beginning, but they are exceptionally rewarding when they are happy enough to re-bloom.

Orchids can be picky about their growing conditions, which makes them great indoor flowers. There are also a few things you can do to maximize their blooms. In this article, gardening expert Melissa Strauss shares her top tips for growing beautiful orchids indoors! 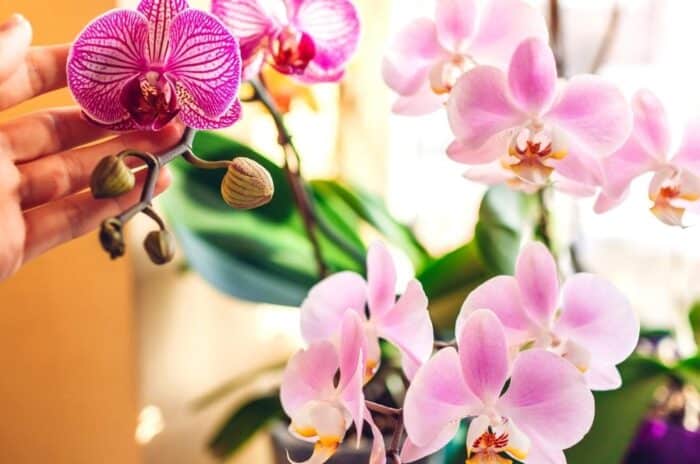 Are you thinking of welcoming an Orchid into your indoor or outdoor garden space? Curious to know if it will come back each season or if you'll have to replant it every year? In this article, gardening expert Melissa Strauss walks through if Orchids are considered annual, biennial, or perennial plants.

Looking to add some cattleya orchids to your indoor or outdoor garden this season? These tropical flowers are both popular, and stunning to look at. In this article, gardening expert Melissa Strauss walks through everything you need to know about cattleya orchids and their care.

Thinking of adding a few purple orchids to your flower garden but aren't sure which type to add? There are many different shades of purple orchids, so picking the perfect flower can be a bit difficult! In this article, gardening expert Melissa Strauss looks at the some of the top purple orchid varieties you can grow!

Looking for a pink orchid to plant in your indoor or outdoor garden, and can't decide what to choose? There are many different pink varieties to choose from, so picking just one can be a challenge. In this article, gardening expert Melissa Strauss takes a deeper look at some of her favorite orchids that bloom in beautiful shades of pink!

Blue Orchids: Are They Real Flowers? Do They Exist Naturally?

Many gardeners look for that single flower that will set their garden apart from others. For some people, that's finding a flower of a unique color. Few flowers are more beautiful than orchids, and blue flowers are some of the most sought after. So what about blue orchids? Are these flowers actually real? Do they exist without being modified? Gardening expert Madison Moulton gets down to the nitty gritty details in this article.