Thinking of planting a vine with orange flowers this season, but aren't sure where to start? The good news is, there are many different vines and climbers that sport bright, beautiful, orange flowers. In this article, you'll learn all about our favorite orange flowering vines, and where they can grow. 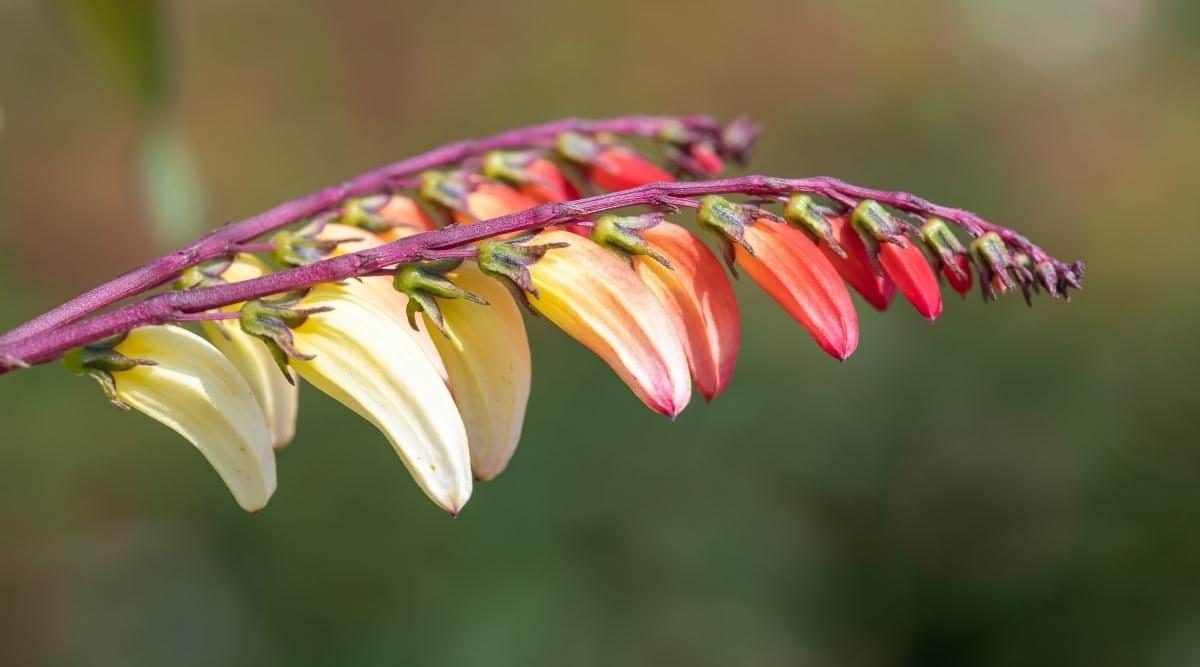 Narrowing down which one to pick can be a difficult choice to make, considering there are some that grow rather aggressively depending on your geographical region. There are also some that are considered invasive, so it’s important to check your state and local guidelines before planting any new plant.

With that being said, there are several orange flowered climbers that can make a great addition to any garden space. Many of them grow quite quickly, and can act as a barrier, privacy screen, or just be added to give your garden a little extra color. Let’s take a look at our favorite flowering vines that have orange blooms!

Black-eyed Susan vines are the first flowering vines on our list. This plant is famous for its dark brown center, giving it the appearance of a ‘black eye.’

Susans are picky plants regarding water consumption, as they require damp but easily drainable soil. This necessity makes this plant easy to grow outdoors with the right setup but more difficult to grow indoors.

The flowers on this plant come in various shades, so if you have your heart set on vines with orange flowers, you have to be careful to make sure you purchase the right variety.

Black-eyed Susans are not toxic to humans or to dogs, but they are mildly toxic to cats if ingested. This vine is considered invasive in certain areas, so keep that in mind before planting. But it’s often used as a great ornamental vine on an annual basis in hardiness zones 3-8.

Despite its name, the Cape Honeysuckle is not actually a type of honeysuckle.

It is a scrambling shrub that you can train as a climbing vine. It can climb walls or trellises with minimal support. This plant requires a lot of care and pruning to maintain it as a climbing vine, but the effort is worth it. This plant produces patches of beautiful orange flowers when properly taken care of.

Cape Honeysuckle is considered invasive in certain areas of the world due to its fast spreading roots. It’s planted as an annual flower in many colder climates.

The Coral Honeysuckle Vine is a low-maintenance woody perennial. While similar in appearance to the Japanese Honeysuckle Vine, the Coral is a non-invasive species that is well-liked by many species.

This plant is a favorite for pollinators such as hummingbirds and butterflies. Additionally, many birds, including robins and finches, enjoy eating the red berries produced by this plant.

However, these berries are poisonous to most household pets and cause digestive problems if eaten.

Resembling a firecracker exploding, this beautiful vine grows rows of banana-shaped flowers arranged in a gradient of red to orange to white.

This plant is an annual that is closely related to Morning Glories. This plant is deer resistant, and butterflies and hummingbirds enjoy the plant’s nectar.

The Firecracker Vine isn’t highly toxic to pets, but it is poisonous to humans in large quantities, so you should keep it away from children.

The Flamenco Trumpet Vine is a perennial with three-inch flowers that grow in clusters. This plant is relatively easy to grow as it is not particular about pH levels or soil type. This vine can tolerate environmental salt.

The Flamenco Trumpet is considered an invasive plant in many areas due to its ease of growth, but it does well when planted along a fence or a feature that it can be allowed to grow up.

The Flamenco Trumpet Vine is mildly toxic for pets, and the pollen, nectar, and flowers are a mild skin irritant for humans. When caring for this plant, it is important to wear gloves and to wash your hands immediately after handling the plant.

Though this plant is beautiful, every part of it is highly toxic to humans and animals. Even in small amounts, this plant can be fatal, and so when you are handling it, you must treat it with care.

The Gloriosa Lily can grow in almost any soil condition, even in sand or soils with an extreme lack of nutrients.

The Gloriosa Lily has an extremely varied reception across different countries between its beauty, toxicity, and rampant growth.

It is the national flower of Zimbabwe and the state flower of Tamil Nadu, India. Queen Elizabeth II was given a brooch in the shape of a Gloriosa Lily as a sign of respect in 1947.

In Australia, the plant has spread to the detriment of native plants and is therefore considered a weed.

The Major Wheeler Honeysuckle Vine is a low-maintenance plant with deep red and orange flowers that last from spring to the end of the summer.

This honeysuckle variety is deer resistant, liked by pollinators, and attracts birds.

The Major Wheeler does not require pruning except for individual preference in shaping. It requires a low amount of water and grows quickly in containers and outdoors.

While this plant isn’t invasive and doesn’t tend to take over space from other plants, it is very fast growing.

If you want the Major Wheeler to grow in a particular pattern, you will need to watch its growth to ensure that it obtains the desired shape.

The Major Wheeler Honeysuckle is very mildly toxic to humans and cats, but it is highly toxic for dogs.

The Mexican Flame Vine is a showy evergreen vine with orange flowers shaped like bright starbursts. The blooms last until the first frost. It’s not considered invasive, but their root systems grow aggressively.

These flowering vines attract bees and butterflies, especially Monarch Butterflies, but the plant is toxic to both dogs and cats. Additionally, the sap can irritate those with sensitive skin.

The Mexican Flame Vine is drought resistant and can grow in various soil types, including sand.

It can be grown in hanging baskets or climbing up garden structures.

The Mexican Flame Vine needs to be pruned often for continued growth, but you can easily use the cuttings to grow new Flame Vines if you would like to do so.

Not to be confused with the Orange Glory Flower, the Orange Morning Glory is a vine with red-orange flowers that grows easily in the United States. The flowers are circular with a scarlet rim that fades to orange down the long throat of the flower.

The Orange Morning Glory is an ornamental plant that attracts butterflies and can provide additional cover when growing on fences.

This plant is toxic to humans, dogs, cats, and horses. Most types of Morning Glory are considered invasive depending on your location, but that doesn’t stop it from being one of the most popular flowering vines that’s planted.

The Tangerine Beauty Crossvine is a very sturdy, low-maintenance plant. While it grows best with full sun and moderate amounts of water, this plant can manage to thrive in areas with heavy shade and poor soil conditions.

The star-shaped flowers of the Tangerine Beauty Crossvine fade from pinkish-red along the outside to vibrant orange in the center.

This plant grows quickly, and the flowers are fragrant and pleasant. It can provide excellent groundcover and is good for decorating fences and other structures. There are also some crossvines that have red blooms if you decide orange isn’t your thing.

The Trumpet Vine is the common name for two subspecies of the plant, the Campsis Radicans, and the Campsis Grandiflora. This article looks at the Radicans variety as it is the subspecies that is native to America and grows the most easily.

The Trumpet Vine gets its name from its beautiful orange, trumpet-shaped flowers. It grows naturally in wooded areas and near riverbanks, but it is easy to plant in gardens as well.

This plant is a perennial, and it spreads very easily. This plant requires frequent pruning to not overtake other plants in a garden. It’s considered invasive in many areas due to the aggressive spread of its roots.

While the plant isn’t highly toxic for pets, the pollen, nectar, and flowers are a mild skin irritant for humans. When caring for this plant, it is important to wear gloves and to wash your hands immediately after handling the plant. Hummingbirds and butterflies are attracted to the trumpet vine.

So, now that you’ve taken a look at some of our favorite orange flowering vines, the next step is to start planting! As we’ve mentioned, always check with local regulations when it comes to planting potentially aggressive or invasive plants. But many of these vines (despite being invasive) can be safe in certain climates if they are properly managed. Happy gardening! 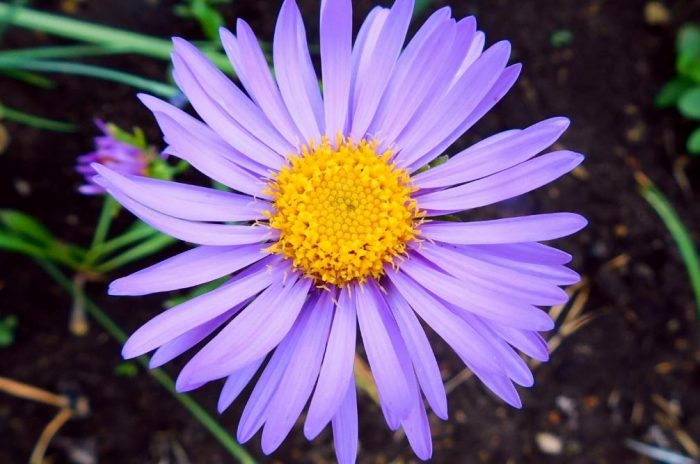 Thinking of adding a white flowering vine to your garden, but aren't quite sure where you should start? There are many vines that sport showy white blooms, and many will climb rapidly without much maintenance. IN this article, we look at our favorite white flowering vines to help you find the best fit for your garden!

Clematis can be a beautiful addition to just about any garden. They are easy to grow, and have massively beautiful blooms that different shades of color to any garden space. But which type of clematis should you grow? There are many different clematis varieties, and many of them can accent your garden in different ways. In this article, we take a deeper look at our favorite types of clematis cultivars to help you decide which might be best to plant this season!

Are you thinking of adding some shorter perennial plants to your garden edges or borders? In this article, we examine 61 of our favorite perennial plants that are smaller in stature. These plants will return year after year, and give your garden a great look with the foliage that's closer to the ground.