Can I Plant Two Pothos Plants in the Same Pot Together? 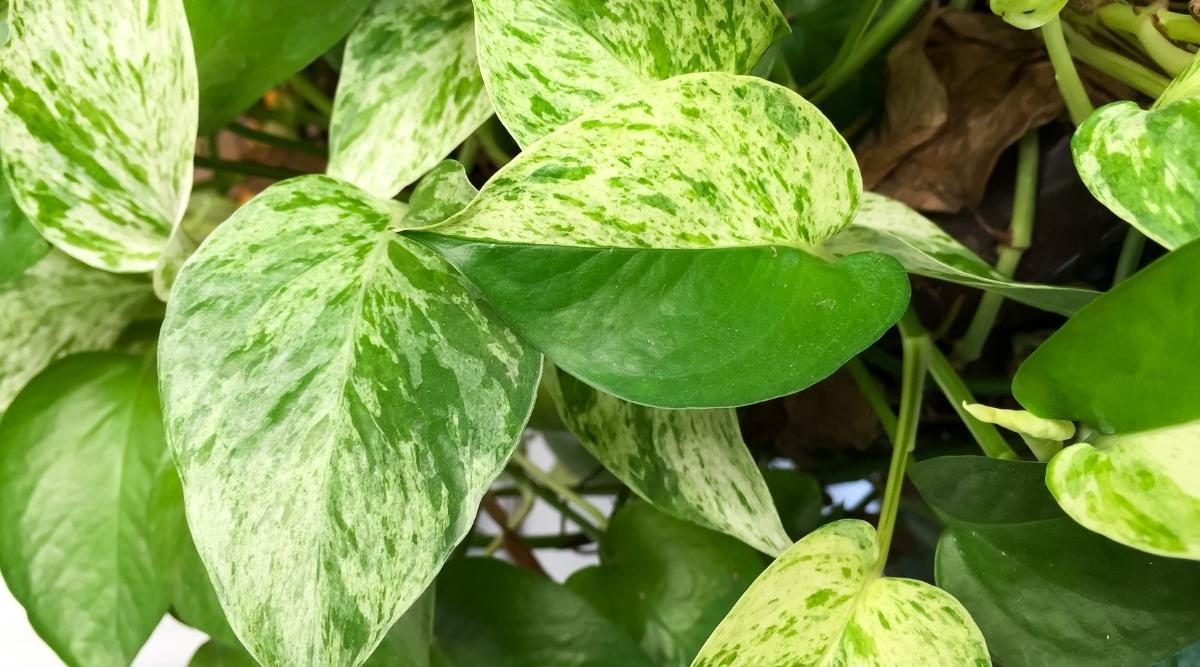 Undoubtedly one of the most popular houseplants ever, the humble Pothos has a long list of dedicated fans and followers obsessed with their stunning looks and beginner-friendly nature. For those who have more than one type of pothos, you may have looked at them side by side, unable to decide which one you should buy.

Maybe you’ve decided that you can’t have just one Pothos but you have to have two, and you want to grow them as siblings in the same pot together. But will they grow well in the same pot? Will their roots compete for the same nutrients?

In this article, we will take a look at if you can grow two pothos n the same pot, at the same time. We will also take a deeper look at if it’s even a good idea to do that in the first place. Ready to learn a bit more? Keep reading to find out!

Can I Grow Two Pothos in the Same Pot?

The simple answer here is yes, two pothos will typically be fine when potted together. In fact, more than one cultivar in the same pot should be fine together. But the key is making sure that the pot is big enough to house them. You don’t want to overcrowd a smaller area, or your pothos may end up with root rot, or another disease, and not surviving.

All Pothos are part of the Epipremnum aureum species, originating from the islands of French Polynesia.

They are known as Devil’s Ivy for their ability to spread rapidly and take over areas. This is also the reason why they are declared invasive in many regions, only grown indoors or in pots to prevent damage to local habitats.

In some areas, you may hear this plant labeled the Money Plant due to the belief that it brings its owner financial prosperity. But usually, they are simply known as Pothos after the first genus the plant was placed in.

Pothos plants fall under the arum family, known scientifically as Araceae. This makes them related to many other houseplants, including Peace Lilies and Philodendrons. You may notice this resemblance in other climbing plants, such as Philodendron hederaceum, which the Pothos is commonly confused for.

Pothos are incredibly beginner-friendly houseplants – even the rarer cultivars. Any of these options will make great first plants or additions to an existing collection, if you can get your hands on one:

With so many interesting cultivars, it’s impossible to limit yourself to one. A single Golden Pothos is the gateway to becoming a fully-fledged Pothos collector, adding a new cultivar week after week. Experienced owners may wonder whether it’s possible to combine two types in the same pot, or even more.

When companion planting in pots, compatibility in care and needs is vital to ensure one plant does not survive at the expense of the other. Luckily, as they are all part of the same species, most cultivars have almost exactly the same requirements and growth rates.

There may be some slight differences between varieties, but not enough to warrant leaving them in separate pots. In a large enough pot, you can even plant three or four types together. There is technically no limit to how many you can combine.

The best way to do this is through propagation. Established plants will be tougher to combine in a single pot naturally, leaving the vine split straight down the middle until they have grown enough to mix together.

When planting cuttings, you can dot the different types around the pot equally, making a ‘Frankenstein’ Pothos that looks nothing like any other type on the market.

To get started, gather two different Pothos types with healthy vines and strong leaf growth. Remove a cutting just below a node, leaving at least one or two leaves in the top half of the cutting. Root in water and plant in a new pot when the roots have grown one or two inches long.

Gather the different cuttings together in one group, alternating the types of vine to truly integrate the two plants. Plant in the center of the pot, leaving the vines to grow and cascade down the side of the pot.

All Pothos types can be planted together, but there are some combinations that make sense based on appearance, growth rate or size. Let’s take a deeper look at some of the best combinations of cultivars that will grow well together, but also look fantastic when planted next to one another.

A classic combination, Golden Pothos has flecks of gold across the leaves that are highlighted when placed next to the bright yellow of the Neon Pothos. Give the pot plenty of indirect light to heighten the bright colors and bring out the best in these cultivars.

For lovers of flat color, this combination is ideal. The deep green leaves of Jade contrast wonderfully with the bright leaves of the Neon, without any variegation to detract from the interesting colors. Make sure the different vines are balanced to avoid a harsh split between the two.

These two closely related cultivars look incredibly similar, with slight differences in variegation pattern and color. This makes an interesting display that you need to look closely at to figure out. The smaller leaves of N’joy are also a close match with Pearls & Jade, meaning they won’t get lost in the arrangement.

The Marble Queen is one of the oldest Pothos cultivars with stark white variegation. Snow Queen, a sport of Marble Queen, looks similar but has a slightly different level of variegation. Due to their close relation, these two types not only look fantastic together, but grow incredibly well in the same pot.

Although it looks similar to the Golden Pothos, Hawaiian Pothos has slightly paler yellow variegation. This color and pattern is similar to a smaller cultivar, Manjula. Pair them in the same pot for a leafy and delicate display.

Much like the Golden and Neon Pothos pairing, Neon works well with Hawaiian too. As the leaves of the Hawaiian Pothos are larger, Neon will act as a colorful complement. These plants look fantastic next to one another, just make sure your pot is large enough to accommodate both of them at the same time.

Once you’ve combined your two plants, you’ll need to know how to keep them both happy. Follow these Pothos care tips to keep your creation healthy and thriving.

Most Pothos are tolerant of low light conditions, particularly the original species – Golden Pothos. However, they grow best when given bright indirect light and even some gentle direct morning sun.

Avoid keeping highly variegated combinations, such as Marble Queen and Snow Queen, in low light. Due to the lack of chlorophyll in the leaves, highly variegated plants need as much bright indirect light as they can get to grow their best.

Opt for an east-facing window in bright indirect light, protected from direct midday and afternoon sun to avoid scorching the leaves.

Pothos have thicker leaves than some other houseplants and are happy to leave their soil to dry out slightly before the next watering.

Pair types with similar leaf sizes to ensure their watering needs are matched. Those with larger leaves, such as Hawaiian, will need water less often than those with smaller leaves, like N’Joy.

Pothos generally need water around once a week. However, it’s best to test the soil every couple of days rather than watering on a schedule. This ensures the plants only get water when they really need it, preventing potential problems with overwatering and root rot.

You’ll need to plant your hybrid Pothos in a new pot with fresh soil to combine them correctly. All varieties love the same soil as most houseplants – airy and well-draining.

Purchase a specialized houseplant soil mix with materials designed for growth in containers. If you plan to repot or plant often, you can also mix your own soil by combining potting soil with coconut coir (or peat moss) and perlite.

These materials create a mix that holds enough water to keep the roots happy while draining well enough to prevent root rot.

Most cultivars have a similar growth rate and will need feeding around the same time. Apply fertilizer during the growing season (spring and summer).

The frequency will depend on your chosen fertilizer. Liquid fertilizers are typically applied once every 4-6 weeks while slow-release options are only added once per season.

If you want to step up your growing game and make a stunning houseplant feature completely unique to you, planting two Pothos in the same pot is a great experiment. Just make sure that the pot is large enough to accommodate them all to avoid common diseases. Better yet, plant three or four types together for a captivating display.

Can I Train My Pothos Plant To Climb Walls or a Trellis?

How Long Can a Pothos Plant Last Without Water?

How Long Do House Plants Live? What’s Their Average Lifespan?

Can You Grow Pothos Plants Outdoors? Will They Survive?

Pothos plants are an indoor plant favorite amongst many amateur gardeners. But what about growing them outside? Is that a good or bad idea and will they actually live outside in your climate or hardiness zone? Organic gardening expert Logan Hailey explores what you can expect if you attempt to grow these popular plants outside. 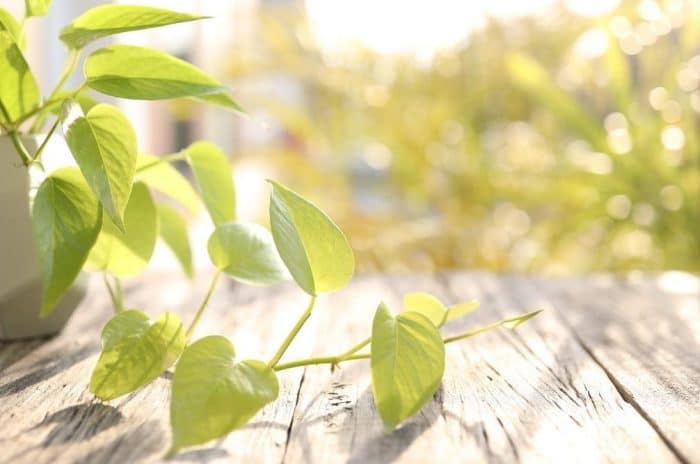 Can I Train My Pothos Plant To Climb Walls or a Trellis?

Are you trying to train your pothos plant to climb walls or a trellis? Is it even possible for pothos plants to climb up on different objects if they are trained to do so? In this article, organic gardening expert Logan Hailey guides you through all you need to know when it comes to pothos plants and climbing!

The pothos plant has become a fixture for many beginning gardeners and seasoned gardeners alike. They are popular indoors, and in urban gardens. But do these popular houseplants actually bloom? Organic gardening expert Logan Hailey examines what you can expect when it comes to pothos plants and if they actually flower.

How Long Can a Pothos Plant Last Without Water?

How Long Do House Plants Live? What’s Their Average Lifespan?

Why Doesn’t My Pothos Plant Have Leaves? Is There a Problem?

Pothos plants are one of the most popular houseplants you can add to your indoor garden space. So what happens when you get it home, and it's not growing the beautiful green leaves that you've seen it grow in pictures? In this article, organic gardening expert Logan Hailey examines why your pothos may not have grown leaves, and how to fix it.

How to Plant, Grow, and Care For Creeping Jenny