Streamside spider lilies are amazing plants that are very common in certain zones across the world. Gardening and plant expert Madison Moulton walks through everything you need to know about the Hymenocallis Rotata Plant in this in-depth plant profile. 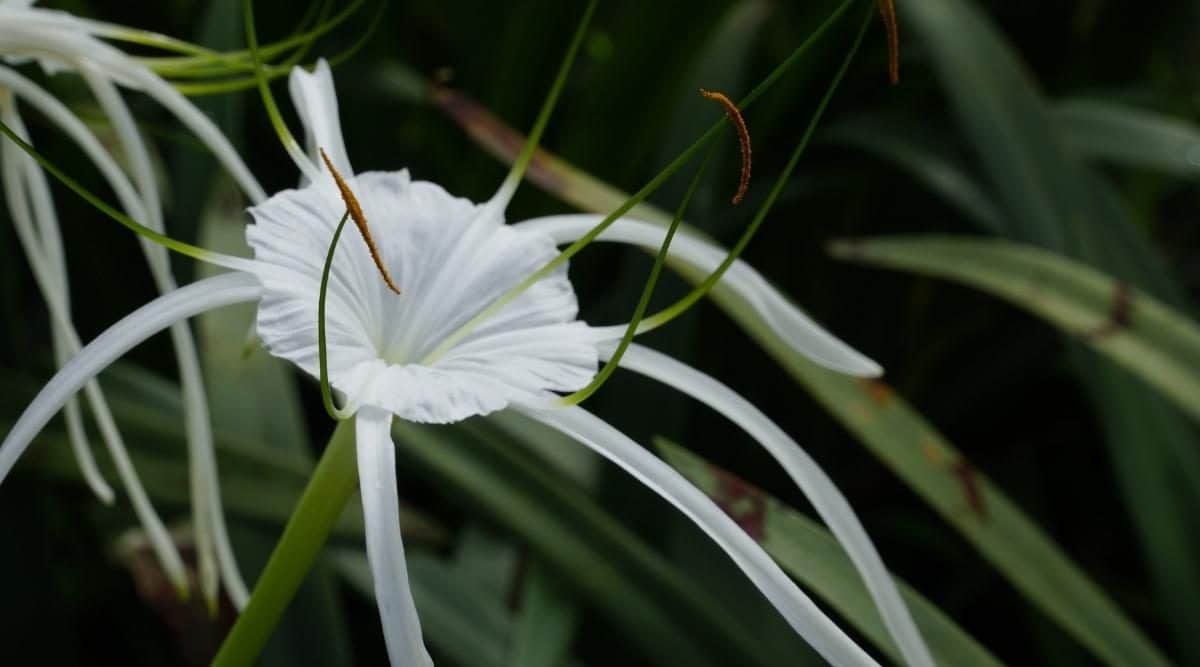 Strolling along the streams of northern Florida, you may have come across an unusual flower. Growing near water sources like lakes or streams, the Streamside Spider Lily is a native Florida gem.

Its white showy flowers are sure to stop any passersby. If you’re lucky enough to find a field during the flowering season, the wispy blooms atop tall stems form an impressive display when grouped together. Unfortunately, this species of Spider Lily is also endangered, and anyone wanting to witness their beauty firsthand may struggle to find them in the years to come.

Whether you’re looking to identify a Spider Lily you’ve come across on an afternoon walk, or simply want to appreciate the beauty of this mesmerizing species, you’re in the right place.

Hymenocallis rotata is largely found in the northern parts of Florida, moving into lower Alabama, with some sightings reported along the east and south coast of the United States. In fact, 13 of the 16 native US Hymenocallis species are found in Florida. Due to its region of origin, it is also known as Hymenocallis floridana, or less often called Hymenocallis laciniata.

A lover of water, the Spider Lily is almost always found in wetland areas. You will likely come across this plant in marshes or ditches, either sitting directly in or very close to water sources. The distribution is the densest near Tallahassee, found along spring runs and lakes in Wakulla County heading north toward the state capital.

This plant is classified as a hydrophyte, meaning it will only grow in or very close to water. The bulb sits below the waterline, leaving the upright green leaves and flower stems to shoot above. In areas with shallow water cover, you’ll find many Streamside spider lilies grouped together, soaking up the moisture.

Hymenocallis rotata falls under the superorder lilioid monocots, characterized by their large colored tepals (the outer part of the flower). This explains their common name ‘Spider Lily’, as they are related to the other Lily plants beloved by gardeners. The ‘Spider’ part of the name is thanks to the shape of the flowers, with six curved petals that look like large, delicate spiders’ legs.

Part of the Amaryllidaceae family, the Spider Lily is a relative of many common garden plants, including Agapanthus, Alliums, and Daffodils. The genus Hymenocallis contains many rhizomatous bulbs with similarly shaped flowers, occasionally grown in gardens for their ornamental value.

In gardening terms, it is considered a perennial herb, flowering in spring each year.

This Hymenocallis gets its specific epithet name from the unique structure of the flower. The corona (part of the flower on the outer edge of the stamen) rotates, a trait unique to the genus. This corona is white with a yellow-green center. This is different from other spider lilies which can be red, or other colors.

Each plant produces two to four white flowers per stem. These flowers start out cup-shaped but begin to flatten out as the flower opens further. Surrounding the flower are long, wispy tepals, also in white, that make this plant instantly recognizable. These flowers open around the same time and release a stunning fragrance.

The deciduous leaves are either arched upward or almost completely erect, framing the flowers in the center. They remain a glossy green all season, similar to the leaves of its distant relative, the Clivia.

The Streamside Spider Lily has a Global Conservation Status rank of G2 – imperiled. Defined as “at high risk of extinction or collapse”, this classification is likely due to the small regional distribution of this relatively unknown species. It could also be a result of low or declining distribution, meaning finding this plant in the wild will become more difficult over time.

This status does not take garden cultivation into account and may improve the chances of this wonderful species surviving. But these plants are not particularly easy to find, especially in local nurseries, and are most often appreciated when discovered out in the wild.

H. rotata is one of many Spider Lilies, mostly found in the same zones around Florida.

H. godfreyi looks similar, but is slightly smaller than rotata. This is the only plant of the genus that forms rhizomes on the bottom of the bulb as opposed to the side. The leaves are much shorter too, growing just over 1 foot tall. Also in Wakulla County, H. godfreyi is found in a more limited area and is considered endangered.

H. crassifolia is often mistaken for rotata. Found mostly in the northeast of Florida, the flowers bloom in late spring. These flowers stay funnel-shaped, as opposed to rotata flowers that flatten out over time. The leaves are almost always upright, while rotata leaves can be arched or upright.

More commonly grown in gardens, H. occidentalis has an unusual habitat for the Hymenocallis genus. It is usually found in forests, often away from water sources, in the Florida Panhandle. It also blooms later than other species, producing showy flowers in early summer.

In the wild, you may also find H. duvalensis or H. choctawensis. In gardens around the world, the most commonly cultivated species are:

The Streamside Spider Lily, although usually found in the wild, deserves appreciation from gardeners all over the globe. Keep a lookout for the spider-like white flowers in spring – you won’t be disappointed.

Thinking of adding some orchids to your gardening space or home landscape? There are many different types of orchids, all of which have big, beautiful blooms. In this article, flower and garden expert Taylor Sievers examines 47 different orchid varieties with their names and pictures, to help you find the perfect bloom for your garden. 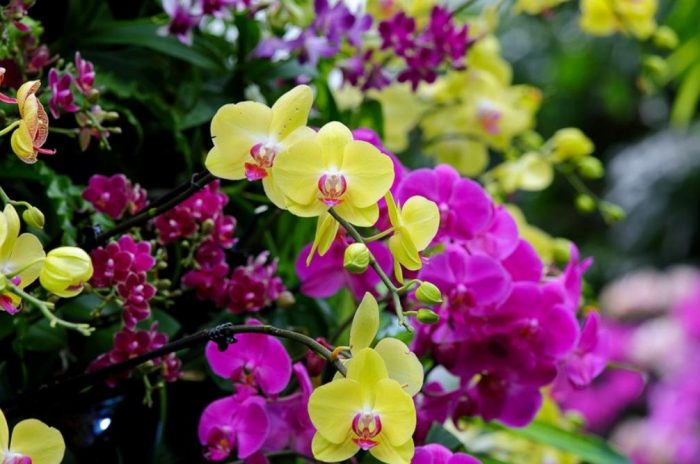 If you are looking to go a little darker in your gardening theme, it's only natural to consider adding some black flowers to your home or garden. It's always crucial to find the right balance to any garden when it comes to color, which is why we always recommend a variety of different flowers and colors. In this article, we take a deeper look at some of our favorite black flowers to add a little mystery to your gardening area or home landscape.

Are you looking for a bit of fall color in your garden beds? Asters are your answer. These stunning perennials are popular across North America, especially in pollinator gardens. Plant one variety, or choose several of the hundreds in this genus and plant family for a garden full of wildlife and color throughout summer and fall.

Are you looking to add some green flowers to your garden, but aren't sure which ones might look the best? There are many different flowers that are green when they bloom, but not all are well suited for every climate or geographic location. In this article, we take a look at our favorite flowers that are green in color, and will look fantastic in gardens, in just about every hardiness zone.

Are you thinking of adding some color to your garden by adding some Zinnia flowers? Zinnias come in a variety of different colors, and are easy to both plant and care for. But there's some tricks you'll want in your back pocket to make sure they flourish. In this article, gardening and flower expert Taylor Sievers walks through every step you'll need to successfully plant, grow, and care for Zinnia flowering plants.

Blue False Indigo: How to Plant, Grow, and Care For Baptisia Australis

Are you looking to grow Blue False Indigo in your garden? Beginner gardeners or those wanting a low-maintenance, water-wise plant to add to their landscape will be satisfied with this native perennial. Gardening expert Madison Moulton takes a look at this popular plant, covering absolutely everything you need to know from planting to cutting the flowers in spring.

Balloon Flowers: How to Plant, Grow, and Care For Platycodon Grandiflorus

Are you looking to plant balloon flowers in your garden? These perennials feature stunning, large flowers atop short or tall stems that will captivate any garden guests. Take a look at this article for absolutely everything you need to know to successfully grow these plants in your own backyard.