How and When to Prune Blueberry Shrubs

Are you attempting to prune your blueberry bushes this season, but aren't sure where to start? Pruning can be more of an art form, especially with difficult shrubs like the blueberry. In this article, gardening expert Liessa Bowen walks through how to prune blueberry shrubs in just a few easy steps! 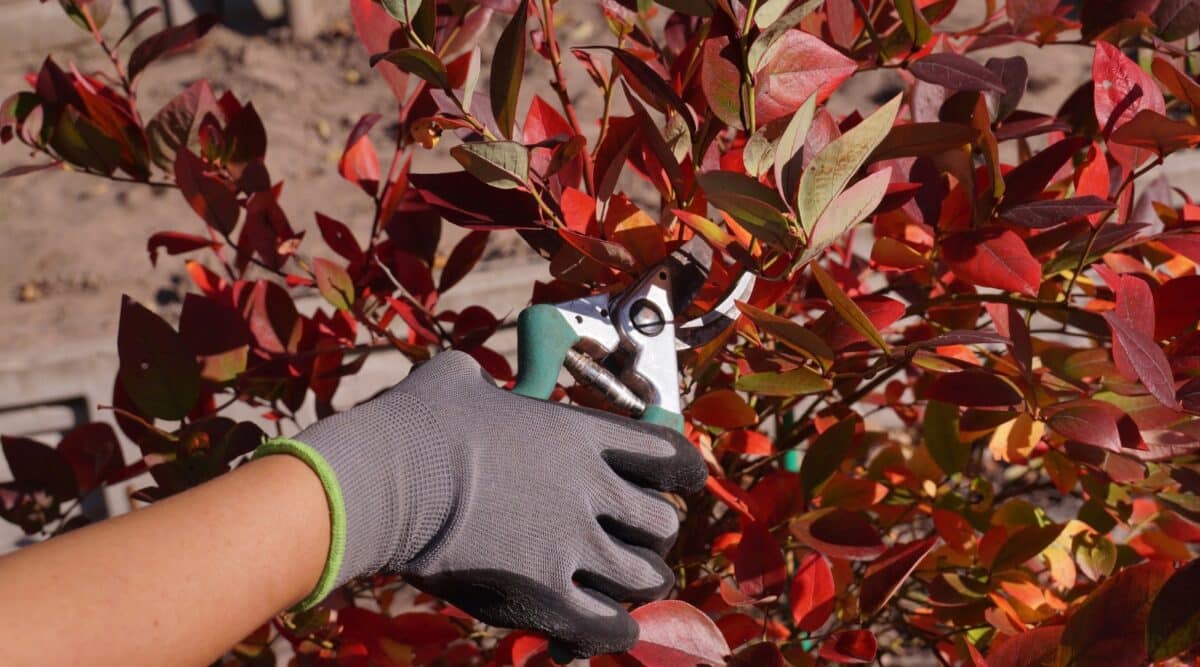 Blueberry bushes can be large or small, but eventually, they all start to look a bit messy. You may also notice that their berry productivity starts to wane over time. If your blueberry bushes have been around a while, you have probably watched them grow, flower, produce fruit, and spread. But when should they be pruned? And do they even need to be pruned?

After all, blueberries grow in the wild and do just fine without any pruning, right? In a garden setting, pruning your plants can be a really good thing. For one, it helps keep them looking nice. But more importantly, some thoughtful pruning and thinning of your plants can help keep them healthy and make them even more productive.

In this article, we will look at the benefits of pruning your blueberry bushes. You’ll also learn when to do it and how to do it. Pruning blueberries is a fairly simple process. With basic tools, a little planning, and a bit of time and effort, your bushes will be in top form and ready for next season’s blueberry crop!

Before you grab the nearest tool and start chopping randomly, it’s important to have a plan. Ask yourself these questions before you start pruning.

Have the answers to these questions in mind before you start pruning. Each question may influence the way you prune your shrubs.

Your primary goal is likely to keep your plants looking nice, while allowing you to harvest more blueberries next summer. After all, they make a great landscape shrub for both visual appeal and fruit productivity. If this is your goal, it’s a good one, you should plan for regular pruning and maintenance.

Once a year, plan to use the following steps to guide you as you remove the least productive twigs. This will help your blueberry plants thrive, look great, and grow more fruit.

Step 2: Prune at the Right Time

Timing is important when pruning fruiting and flowering shrubs, including blueberries. Pruning should be done during the dormant season.

For blueberries, mid-winter is ideal, likely anytime from December through March in most climates. You probably will need to do pruning maintenance only once per year, unless you notice pests or diseases that need more immediate attention.

You will see flower buds on the dormant branches, but don’t worry about removing these. The goal of pruning is to increase the health and productivity of your bushes in the long run.

Removing the least productive canes in winter will increase production elsewhere on the bush in summer. Pruning allows you to control the growth pattern of your plants by selecting the healthiest and most robust canes that will ultimately produce the most fruit.

If you are just getting started with blueberries, you can even prune budding branches when you first set your plants in the ground. You should not expect or encourage your plant to produce fruit in the first year.

Instead, the plant needs to funnel its energy to the roots. This encourages strong root growth so it will become well-established and healthy. It may take a couple of years before your plant is fully fruiting, but with proper care and pruning, it will be worth the wait!

Step 3: Use the Right Tools

You don’t need any fancy tools to prune a blueberry bush. A set of sharp handheld pruning shears are really all you need. Since blueberries have fairly thin branches, you may not need anything larger, like loppers.

You can, of course, use loppers if you already have them; they may be handy for pruning thicker branches and reaching into larger bushes.

You certainly don’t need anything electric, you won’t need a saw, and you won’t need a ladder. Pruning a blueberry bush is pretty straightforward. Just make sure your tools are sharp and sterilized. Your goal should be to make a nice clean cut with each pruning. Ragged cuts can damage the bush, invite disease, and simply not look as nice.

It is important to know which branches to remove and which to keep. Blueberries are fruiting woody shrubs and their branches are often referred to as “canes.” Your goal with regular pruning should be to maintain a strong central crown and remove the weakest, smallest, and least productive branches.

As the plant grows, the central crown area will gradually expand and your primary fruit-producing canes will become both taller, stronger, and more abundant. You will still need to prune regularly because a blueberry plant in optimal conditions will continue to grow each year and will benefit from active management.

Which Branches Should You Prune?

In each dormant cycle, you will want to selectively remove the weakest and least desirable branches. By focusing the plant’s energy to the crown, growth and nutrients will be directed to the healthiest and strongest center canes closest to the crown.

Some examples of branches that should be pruned from the blueberry shrub include:

Blueberries are densely growing shrubs with many small branches. Every year, you will probably notice a few smaller branches with no leaves or buds. Smaller twiggy branches die back frequently, or they may simply fail to thrive.

Freely prune these back to a thicker healthy cane stem. Blueberries tend to be fairly disease resistant, but if there are branches that appear to be dead, diseased or infested with insects, these can be pruned back to the nearest healthy stem.

Branches Too Close to the Ground

Prune both of these types of branches to allow your bush to be most productive with higher branches that receive better airflow and more sunlight. Prune these low-lying canes back to their connection with a larger, more upright cane.

“Crossovers” are canes that may meander and tangle through the bush. These crossover canes may touch several other branches and are considered less desirable to keep.

Prune these crossovers all the way back to their base connection with a larger stem. This allows the remaining canes better light and better air circulation, which leads to better fruiting. It also helps the bush look better.

As a blueberry plant ages, canes will grow from their thickest central point into smaller and smaller branches. If each of these branches is allowed to grow, flower, and fruit, your plant will end up making a number of smaller and weaker berries on very small, crowded, and unproductive branches.

Prune back the smallest twiggy branches to redirect the plants’ energy to larger and stronger canes.

Some blueberry plants will start spreading by underground runners. If your goal is to create a blueberry hedgerow, you can leave these, or prune a few if they seem too close together. However, if your goal is to cultivate a plant with maximum fruit production, it’s best to remove these runners. Simply cut them at the base where they emerge from the ground.

It can be hard to remove the growth from a thriving bush, but it is important to remember that it is necessary for the health and vitality of the shrub. Once you have selected the weakest, least desirable branches of the blueberry shrub, you can then move on to the next step.

It may seem counterproductive to trim off so many branches, especially when you see them covered with dormant flower buds, but there’s no need to worry. If you are trying to help your blueberry bush be as productive as possible, you will need to do some fairly heavy pruning.

You can expect to regularly trim off many flower buds each time you prune, and you may wonder if that’s okay. It is! By focusing the plant’s energy on the thickest and most robust canes, your plant will produce both larger berries and larger clusters of berries.

For anyone who loves blueberries, these fruiting shrubs are a rewarding addition to a sunny landscape. With a little planning and preparation, blueberry plants are easy to grow. Pruning will help them look their best and reach maximum productivity.

Effective pruning will remove dead and diseased branches, crossovers, and runners. Your pruning efforts should also remove thinner and less productive branches, as well as those branches that are simply overgrown or misshapen. With a bit of regular maintenance, your blueberry bushes will reward you with an abundance of sweet, ripe, juicy berries for years to come!

How Big Do Blueberry Bushes Actually Get?

Where Will Blueberries Grow Best in Your Garden?

Does Your Blueberry Plant Have Red Leaves? Here’s How to Fix it!

Did you recently plant a blueberry plant in your garden or yard, only to find its leaves are turning red? What could be causing the leaves to turn colors when they normally should be healthy and green? In this article, amateur gardener Jason White helps troubleshoot why your blueberry plant has this problem, and how to fix it. 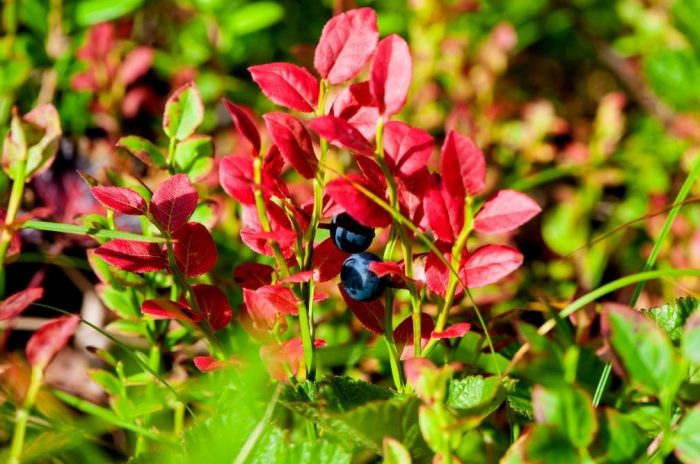 How Big Do Blueberry Bushes Actually Get?

Looking to find out how big blueberry bushes get before you add them to your garden this season? While they can range in size depending on the plant, there are some size consistencies you can rely on. In this article, gardening expert Liessa Bowen looks at how big blueberry shrubs can get to help you properly plan for the space you'll need.

Where Will Blueberries Grow Best in Your Garden?

Are you thinking of growing blueberries in your garden, but aren't sure where to plant them? Blueberries are a garden favorite, but there are definitely areas of your garden that will allow your shrubs to reach their full potential. In this article, gardening expert Liessa Bowen explains where you should be planting blueberries for the best results.

Are you thinking about adding some fruit trees to your garden or fruit orchard this season? Fruit trees can take time to grow, but there are some that produce fruit faster than others. In this article, gardening expert Liessa Bowen looks at some of the fastest-growing fruit trees you can plant.

Are you thinking of adding some blueberry shrubs to your garden, but want to make sure they'll come back each year before you start planting? Blueberry shrubs can be a great addition to any garden, so it's only natural to do your research. In this article, gardening expert Liessa Bowen examines if these popular shrubs are considered annual, biennial, or perennial plants.

Are you looking for a dwarf fruit tree to place in a smaller garden area? These days, a compact growing space isn't necessarily so limiting. There are actually plenty of small fruit trees you can plant, depending on your hardiness zone. In this article, gardening expert Merideth Corhs looks at some of her favorite fruit trees that come in smaller sizes.