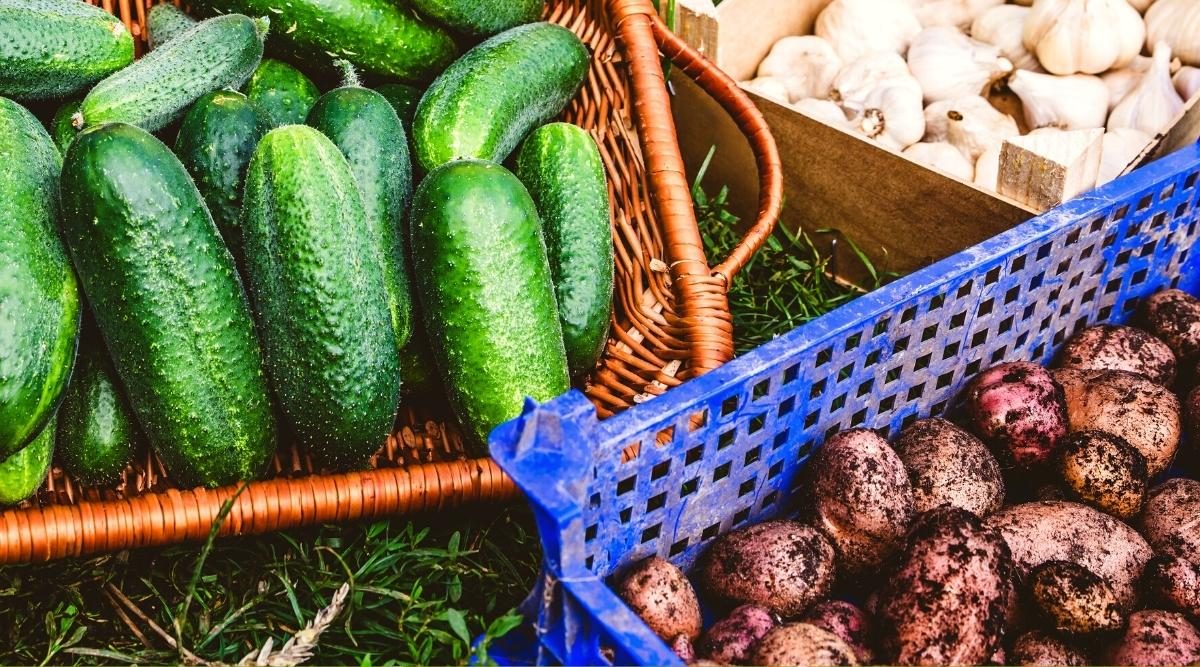 Growing potatoes is actually quite the fun experience. After growing potatoes in my garden for the first time, I was fascinated at how differently they grew compared to cucumbers. All the action takes place below the surface of the soil!

Deciding to plant potatoes takes a bit of pre-planning effort. There are many plants that grow well in close proximity, but there are also quite a few that do not. Some great companion plants for potatoes are lettuce, spinach, and radishes. These are all veggies that have above-ground growth habits and won’t interfere with the tubers.

But what about a summer staple like cucumbers? Can they be grown together with potatoes or will this cause some serious problems in our garden? Read on to learn about the specific needs of both veggies to see if they make good neighbors or if you need to pick another companion.

We do not recommend planting cucumbers with potatoes; they simply don’t play well together.

One reason is that both plants are heavy feeders and will majorly compete with one another for vital resources and water. The cucumber will more than likely lose that battle since it has a shallower root system. This will result in poor growth and low yield.

Another reason is that harvesting potatoes requires uprooting them. This process can easily disturb and break the thin, shallow side roots your cucumber plant relies on. Cucumbers have also been known to spread fungal disease to potatoes in certain climates. No matter how you look at it, cucumbers and potatoes do not make good neighbors.

Figuring out whether you can interplant cucumbers and potatoes together will require taking a look at their growing needs and whether they make helpful or hurtful companions to each other.

Also known as interplanting, companion planting has been used for centuries. The process is meant to replicate what you’d see in nature – plants mixed together growing beautifully.

An interconnected growing system works together growing in harmony. All the biological structures are working with one another to produce stronger plants that are more resilient to pests and diseases.

Modern farming today doesn’t really look like this. Most vegetables and fruits are grown in similar crops and covered in fungicides and pesticides. When gardening at home, you can control this through interplanting and companion plant certain veggies, herbs, and flowers to create a complimentary ecosystem.

There are many reasons to choose to companion plant. Benefits include pollinator attraction (which helps increase yield), pest and disease management, flavor enhancement, maximize space and light, weed suppression, and more. It can also be a great space saving strategy when you have a smaller home garden.

There are a number of reasons you should also skip interplanting certain plants. This is because some plants will have a negative influence on those growing around it.

Some plants can influence the tastes of other plants (garlic for example) and others lure in even more destructive insects. Others will compete for sunlight and shade out everything around them. And some compete for the same resources, like potatoes and cucumbers.

All fruiting plants require quite a bit of water and nutrients to grow and set fruit. So why are we singling out cucumbers and potatoes for being cutthroat when it comes to nutrients?

While many warm season crops – think tomatoes, peppers, and cucumbers – are heavy feeders, they can happily coexist with one another. They have similar nutrient needs, but there seems to be enough to go around if you pay attention to consistent fertilization throughout the growing season.

Potatoes, on the other hand, aren’t great at sharing.

Potatoes are tubers, meaning that the growth of the plant’s ‘fruit’ happens entirely underground. Root vegetables benefit from much higher levels of potassium and phosphorus to stimulate tuber growth.

They don’t need as much nitrogen, which can help promote vegetative growth. A good fertilizer for potatoes may have NPK levels like 5-10-10 or 8-24-24. Micronutrients are also in high demand for potatoes. Sulfur, copper, manganese, zinc, and boron are all needed for healthy growth. When they’re lacking, you will see a noticeable impact on both plant growth and yield.

Cucumbers also have needs for those same macro- and micronutrients, which is why they have better options as companions than potatoes. But their shallow root systems really have no chance of capturing them with deeper rooted potatoes nearby. As a result, your cucumber vines will not grow well and the yield will be very disappointing.

Growing potatoes is actually pretty cool. You start off by planting seed potatoes – or slips – in the ground and marvel at the amount of new potatoes that are formed by a single plant. Generally, you can expect between 5-10 potatoes for every plant you grow. Not bad for some cut-up sprouted seed potatoes!

You can harvest your potatoes as soon as they reach the size you want. ‘New’ or baby potatoes are generally ready between 60-90 from planting. This typically coincides with the plant beginning to flower. Full-sized potatoes are ready about 120 days from harvesting.

Let’s examine the timing of all this. You can plant potatoes as early as 4-6 weeks before your last frost date. You have to wait to plant cucumbers until 2 weeks after your last frost date at the earliest. Most gardens wait quite a bit longer than that since cucumbers prefer a soil temperature of 70 degrees.

You can start to see the problem.

Your potatoes will be ready for harvest while your cucumber plant is still fairly young. Even if all the stars align in your growing season and your cuke is nice and mature, it will still be in the process of flowering and setting fruit when it’s time to harvest your potatoes.

This creates a very high risk of damaging your cucumber roots when you begin to harvest your potatoes. Harvesting potatoes requires digging into the soil and rummaging around for all the potatoes.

Shallow cucumber roots that spread from the main stem can easily become entangled in nearby potato plants. Harvesting the potatoes can pretty easily rip up or significantly damage those trailing roots.

Damaged roots cause significant stress to a plant. If root damage is significant, it can cause the plant to wither and die since it can no longer bring up adequate water and nutrients from the soil. Best case scenario is that the root damage stress causes the plant to stop producing fruit. Either option is less than ideal for your garden.

Cucumbers can Spread Disease to Your Potatoes

So far we’ve talked about the problems potatoes will cause your cucumbers if they’re planted nearby. This section is actually focused on the opposite because cucumbers can spread a fungal disease called potato blight if the two are planted closely together.

Potato blight is a fungal disease caused by the Phytophthora infestans fungus. It can spread rapidly in a garden via airborne spores until they land on a susceptible plant. The spores lie dormant in dry weather, but once warm and humid conditions arise, they begin to develop and spread.

Potato blight is one of the worst problems a potato grower can face since it can devastate an entire crop in just a few days. Most famously, potato blight was a major contributor to the Irish famine of 1840.

Both plants are also susceptible to common early and late blight. Placing these plants next to each other greatly increases the chances of one plant encountering the fungal disease. Once a plant is infected, it quickly spreads to its neighbors.

Our recommendation, perhaps unsurprisingly, is to keep your potatoes and cucumbers in separate areas. I actually recommend growing potatoes in a grow bag if possible. This makes proper fertilizing and watering very simple and makes harvesting a breeze.

Instead of having to dig around in the ground for your potatoes, you can dump the entire grow bag out and easily pick up your harvest. This is actually a really fun activity for kids – it’s kind of like an easter egg hunt!

While it’s tempting to fit as many plants in our home gardens as possible, it’s important to be smart about what grows well together and what does not. After reading this article, we now know that the smart play is to keep cucumbers and potatoes as far apart in our gardens as possible.

How to Plant, Grow, and Care For Turnips in Your Garden

How to Prune Tomato Plants in 6 Easy Steps

How Often & How Much Should You Be Watering Your Tomato Plants?

21 Cabbage Companion Plants You Can Grow With Cabbage

Companion planting can be an art form, specifically if you have limited gardening space. Cabbage is a shade friendly veggie that can grow well with a number of different vegetables. In this article, gardening expert and former organic farmer Sarah Hyde examines her favorite companion plants for cabbage in your garden.

Are you considering planting some cucumbers in your garden, but can't decide which type to pick? There are many different types of cucumber to choose from, so finding the right cucumber variety can be tough to pick from! In this article, gardening expert Logan Hailey looks at 35 different cucumber varieties that you can plant in your home garden!

How to Plant, Grow, and Care For Potatoes in Your Garden

Potatoes are a staple vegetable for many families across the world. They are also some of the most widely grown. But growing potatoes successfully is almost an art, rather than a science. In this article, organic gardening expert Logan Hailey examines each step you should take when you plant, grow, and care for potatoes in your garden.

Are you thinking of growing eggplant in raised garden beds this season? Using raised beds for eggplant can be effective, but requires a bit of finesse. In this article, gardening expert and homesteader Merideth Cohrs walks through her top tips for bountiful eggplant yields from raised beds!