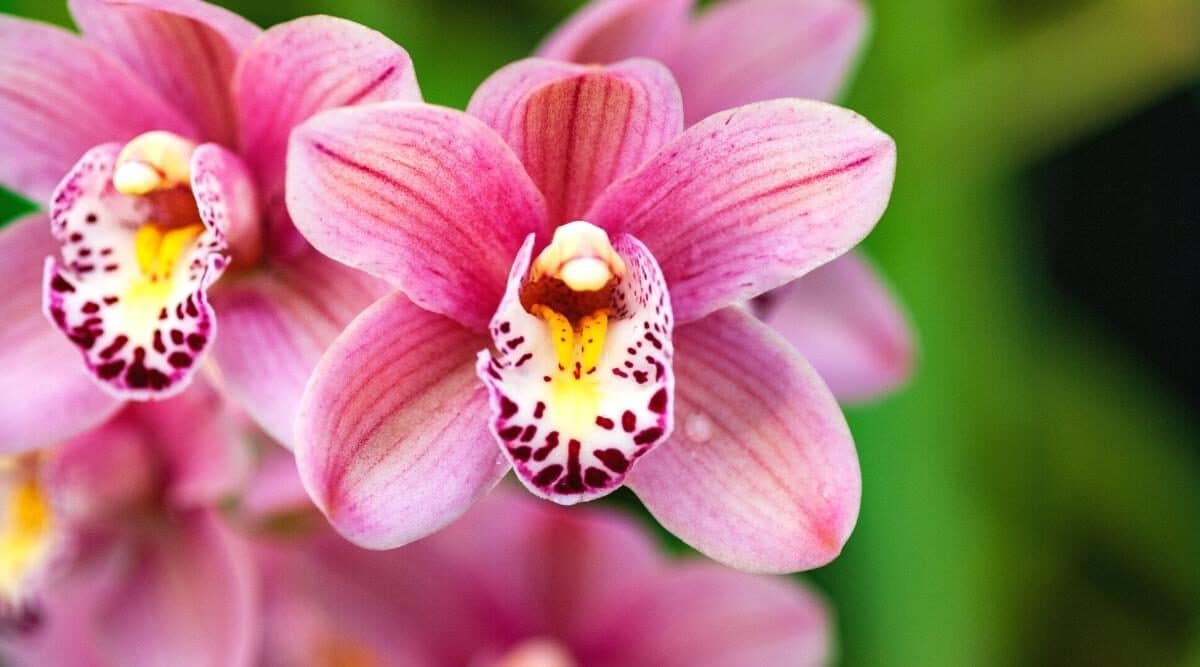 Florists, gardeners, decorators, brides, and grooms alike seem to all be fans of the orchid family of flowering plants. Orchids make stunning cut flowers with their resilient and long-lasting blooms and thin graceful stems. Their flowers can last from weeks to months, making them a fulfilling plant to nurture and grow.

Orchids can grow indoors and outdoors, depending on your hardiness zone. There are over 28,000 species of orchids, so chances are, there will be an orchid that’s perfect for whatever color combination you prefer!

Orchids are also quite fragrant, making them popular as indoor plants. So, if you aren’t sure what colors you can expect from orchids, you’ve come to the right place! Let’s take a look at some of the most popular flower colors, as well as some example flowers to get you started!

Orchids can bloom in almost any color you can imagine, including blue, which is one of the most sought after flower colors because of its rarity. The most popular orchid colors include blooms in red, orange, yellow, pink, white, and purple.

So, now that you know orchids can bloom in just about any color you can think of, let’s take a look at some different examples! With over 28,000 species, there are plenty of different types of flowers to choose from. Below however, are some of our favorites! Let’s dig in!

Oncidium orchids are light-loving, sympodial orchids. They grow horizontally along a central rhizome. Pseudobulbs grow upward from the rhizome and produce a single stem, but more than one pseudobulb is produced per year. Oncidium orchids can be quite spectacular in bloom, with dozens of flowers on a healthy, mature plant.

While some reds lean pinker or more orange, Red Rendezvous is a true, red orchid. It has a multitude of crimson, velvety flowers on each stem. Blooms are deep red with a splash of orange on the lip and a yellow anther cap.

This variety thrives in medium light, is easy to find and easy care for.  Red Rendezvous is great orchid for novices, but not to be overlooked by collectors.

Epidendrum orchids are among the most common forms of orchid. With more than 1,000 varieties, epidendrum are prolific bloomers, often blooming more than once during their season.  Most are fragrant and enjoy medium light conditions and warm temperatures.

Pacific Girl is a hybrid that hails from, you guessed it, California. A sympodial variety, pseudobulbs produce long stems with many leaves, topped with a cluster of small, bright orange flowers. These stems resemble ladders with a flame on top. Epidendrum have the smallest blooms of the orchid world. They are resilient and quite hardy.

This Cattleya is a unique variety. Rather than being epiphytic, like most varieties of cattleya, Laelia Flava is lithophytic, meaning that in the wild, it grows on rocks. Native to Brazil, it enjoys bright shade and a bit more moisture than most varieties. Although it naturally grows on rocks, it can be grown in containers of bark.

Laelia Flava is sympodial, and pseudobulbs produce long stems with clusters of small, sunny yellow flowers. Flowers have a long, tubular lip with a white center and deeper yellow veining.

This one is harder to come by, but worth mentioning because of its unique characteristic of growing on rocks rather than in trees like most of it’s genus.

The Aeranthes genus of orchids is native to tropical forests in Madagascar and Zimbabwe, as well as islands of the West Indian Ocean. Named for its tendency to grow high up in trees, this monopodial epiphyte has a spider like appearance, however, it is anything but dangerous.

Grandiose is a primary hybrid, meaning that it is the immediate offspring of two recognized species. A great specimen for collectors, Grandiose produces only one flower per stem. Flowers are bright, light green and have long thin petals and sepals.

A triangular lip in yellow, comes to a point, adding to the insect like quality of this flower. Blooms are lightly fragrant in the morning and evening.

This rare species is native to Western Australia and is not known to grow naturally in any other location. The only true-blue orchid, it is a standout for certain.

Thelymitra orchids are terrestrial, meaning they grow in the ground, rather than on trees like most orchids. They are sympodial and love sunlight. In fact, most species will close their blooms at night or on cloudy days.

Blue Lady has a flower formation which is unique to its genus. All of the sepals and petals are relatively uniform, with the lip being slightly narrower than the other petals. Its flowers are pale to cornflower blue with a column in the center topped with bright yellow hairlike stamen.

This common orchid is anything but basic. Frequently used by florists in wedding bouquets and arrangements, dendrobium have long stems, covered in a multitude of flowers. Dendrobium orchids are easy to care for and with over 1800 species, they are mainly native to South Asia. They are very adaptable and grow in a wide array of habitats.

The Purple Bombay is so widely known and loved that its possible you may have seen them in the grocery store! This plant produces a multitude of long stems each bearing more than a dozen flowers.

The flowers are a gorgeous fuchsia to magenta color fading to white in the center. The lip is distinctively shaped and proportionate. There are other orchids in a truer purple shade, but Bombay is so popular that it had to be mentioned.

Pink Champagne is jaw droppingly beautiful when mature and in full bloom. A single plant can produce a dozen or more stems, each bearing as many flowers. The leaves are long and grass like and the flowers are as elegant as fine champagne.

Ethereal, pale pink orchid petals and sepals are veined beneath with translucent streaks of deep rose pink. A white lip is edged and speckled with the same deep rose color and painted with a pale-yellow streak.

The buds are beautiful in their own right, as they reveal only the deep rose translucence of their outer shell. This orchid blooms in late winter and forms buds in the fall with a perceptible drop in temperature.

Named for the Greek goddess of love, this orchid is certainly a rare beauty. Aphrodite is native to Taiwan and the Philippines. Like most orchids of the Phalaenopsis species, this plant is a shade lover and prefers a bit more moisture around the roots.

When potting a phalaenopsis orchid, mixing a bit of peat moss into the potting medium will help create the environment this species likes.

Some might say that Aphrodite is simple compared to most orchids, but there is great beauty in this simplicity. Long thin stems give way to floating, pure white blossoms. The snow white sepals frame two large, white petals and the lip sits in the center, where a warm yellow glow emanates from within, and whispers just a suggestion of pink.

This deliciously rare cymbidium orchid comes from New Zealand and has a wonderful modern appeal. Brown is not typically a color associated with healthy flowers, but when it happens, it has a certain something that can’t be found in any other color.

An understated elegance surrounds this exotic plant. Cymbidium orchids are prized for their long, flower heavy stems. Florists love the hardiness and complexity of these flowers.

The chocolate cymbidium name encompasses several hybrid varieties, so not all flowers will have the same appearance from one plant to another. The general form includes balanced sepals and petals in a dusky rose-brown shade.

Some varieties are more striated or speckled than others. The lip is typically white or yellow and accented with a deeper shade that coordinates with the rest of the flower. A truly decadent variety.

I hope that I have adequately prepared you for this startlingly unique orchid. Perhaps if Gomez Addams had brought home the Black Pearl, Morticia would have left these flowers intact.

The catasetinae genus of orchid is similar in its needs to the cattleya genus. They like lots of bright, indirect sunlight, and can be treated similarly to a succulent when it comes to watering. They prefer to dry out completely between waterings, their sturdy pseudobulbs store plenty of moisture and nutrients.

Black Pearl is a genuinely black flower. Deep, ebony, velvet petals and sepals resemble a cymbidium in form. The lip is jet black as well and a small, yellow “eye” peers, almost eerily from the center.

If these blooms were not so stunning and unique in their appearance, they might be thought creepy. This rare variety has a light, spicy fragrance to match its mysterious look.

Orchids are already a favorite among gardeners and florists alike, and the variety of colors and range of variation makes this a fascinating family of plants. The colors of the orchid family literally overflow the rainbow.

Whether you’re looking for a plant to blend into, or stand out amongst your décor, planning a wedding, or simply want to enjoy the full spectrum, there is an orchid for every occasion. But if you find a Black Pearl someplace, let me know where, because that one is definitely on my list!

How to Plant, Grow and Care For Canna Lilies

How to Plant, Grow and Care For Tulips

Dahlia Colors: What Colors Do These Beautiful Flowers Come in? 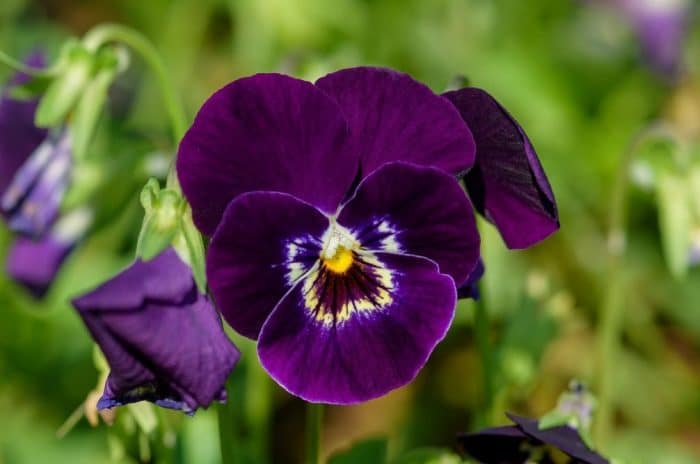 How to Plant, Grow and Care For Canna Lilies

Have you decided to plant some canna lilies this season but aren't quite sure where to start? Canna Lilies are beautiful flowering plants, that can grow quite tall. In this article, gardening expert Paige Folely walks through everything you need to know about canna lilies and their care.

How to Plant, Grow and Care For Tulips

Tulips are one of the most popular flowers in the world. Their beautiful colors and ease of care make these early bloomers a favorite of gardeners everywhere. In this article, certified master gardener Liz Jaros explains everything you need to know about growing tulips this season and their care.

Dahlia Colors: What Colors Do These Beautiful Flowers Come in?

Are you thinking about adding some dahlias to your garden, but want to make sure that their colors will look great with your other flowers? The good news is that dahlias come in many different colors variations. In this article, certified master gardener Liz Jaros looks at all the different colored dahlia flowers you can add to your garden this season.

Are you thinking of adding some color to your garden by adding some Zinnia flowers? Zinnias come in a variety of different colors, and are easy to both plant and care for. But there's some tricks you'll want in your back pocket to make sure they flourish. In this article, gardening and flower expert Taylor Sievers walks through every step you'll need to successfully plant, grow, and care for Zinnia flowering plants.

If you are looking for plants that have both black and white flowers, but don't know where to start - you are in luck! There are several plants with white and black flowers you can add to your garden this season. In this article, we take a look at our favorites, with names and pictures of each!