Should You Use Orchid Bark When Potting Indoor Orchids? 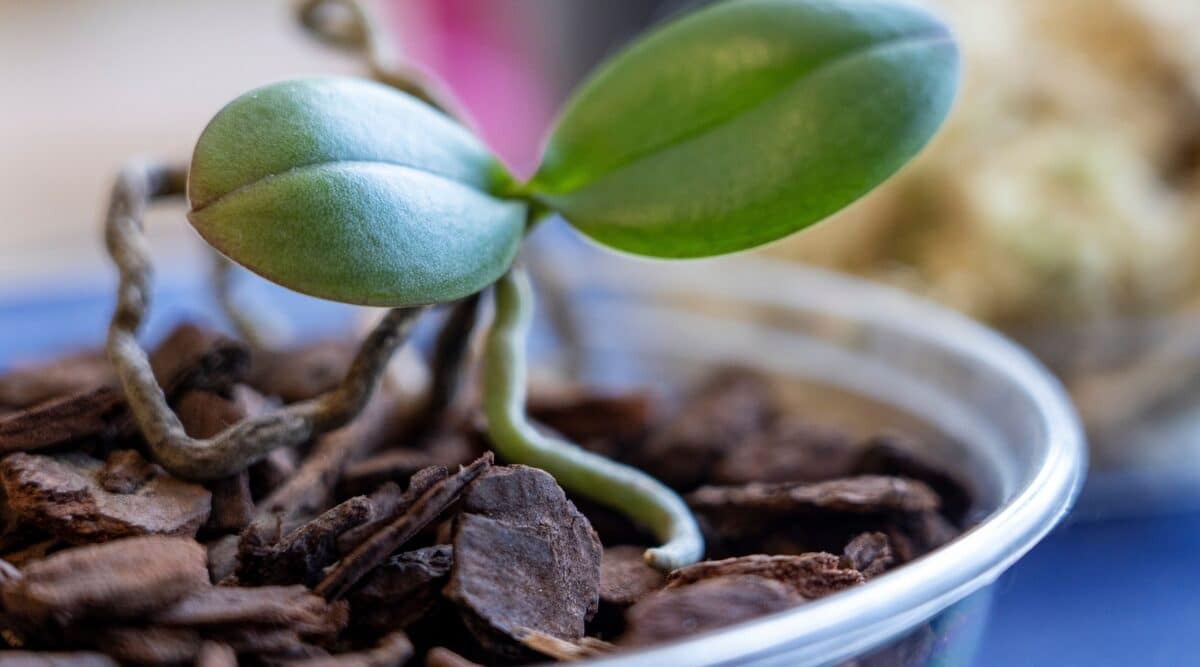 Orchids have a reputation for being somewhat difficult to grow as houseplants. Striking the right balance of watering, fertilizing, potting and humidity can be daunting. Sadly, sometimes this means quite a bit of trial and error, with the error being major disappointment if your orchid doesn’t survive.

Overwatering is, overwhelmingly, the greatest killer of orchids kept as houseplants.  As a result, how, and how much to water tends to be a topic of great discussion and debate. Overwatering leads to root rot in orchids, and eventually, whole plant death.

Did you know that the amount and frequency of watering are not the only factors in the equation? Another very important factor is the potting medium used, and its ability to drain properly to avoid the roots staying wet. The way an orchid is contained makes all the difference in the amount of excess water it has to contend with.

An orchid’s container is an important factor in proper potting habits, but perhaps most important is the potting medium. Let’s talk about potting mediums, also known as orchid bark, and discuss whether using a bark based potting mix has a positive effect on plant health, and why.

Yes, orchid bark or a mix of bark, coco coir, perlite, charcoal, and sponge rock are best mediums for potting orchids. This is due to their ability to allow for maximum airflow and drainage around the roots. For nearly all species of orchids, a bark mix is the ideal potting medium.

To make sense of the best type of potting mix, it is important to talk about the way orchids live in their native habitats. When we are looking to determine the best practices for taking care of any plant, the best place to start is in the place where that plant thrives in the wild.

Once we know what a plant needs in order to grow wild, we can make educated determinations about how best to care for them in captivity. The best way to keep a plant happy is to make it feel at home, in the home.

Orchids vary slightly by genera in terms of their growth habits, however, most of them are epiphytic. Epiphytes are plants that grow on trees. They wrap their roots around tree trunks and limbs. This allows them to draw moisture and nutrients from the air and rainwater. These tropical flowers are predominantly native to their tropical zones, where there is plentiful rainfall.

This epiphytic habit naturally creates a situation where they get filtered sunlight, and lots of water. The catch is, their roots are entirely exposed, so there is no risk of them sitting in water. When their roots sit in water, they quickly reach saturation. They then begin to break down, making them vulnerable to bacteria and fungus.

In nature, the fact that they are suspended in the air, and their roots are exposed, means that they get plenty of air circulation. It can rain everyday in their native habitats and their roots will not rot because they do not sit in water. This changes when there is water being held in the root system.

Some orchids are lithophytes, which means they grow in crevices of rocks. These orchids also get plenty of drainage, as rocks do not hold water the way that soil does.

The exception to this rule in terms of tropical species, is the Spathoglottis Orchid, which is a terrestrial plant. This species grows in the ground. While they still need soil that drains well, their roots are less vulnerable to moisture than other species.

Armed with our knowledge of how they thrive in nature, we can make some assumptions about their needs when kept otherwise, as houseplants, or indoor/outdoor plants.

Root rot kills indoor orchids like nothing else can. Once their root system is compromised, it is no longer able to absorb the nutrients that it needs to survive. The plant will quickly begin to deteriorate.

The first sign of root rot is mushy, brown roots. If you can’t see the roots, this sign will be easy to miss, of course. Next, the leaves will begin to yellow, and gradually fall off. Once rot advances to affect the entire plant, it is nearly impossible to bring it back to health.

The best solution to root rot is prevention. There are 3 factors to consider in prevention: watering, air circulation, and drainage. Your potting medium is instrumental in all three of these important factors.

If your potting medium is too dense, or holds a lot of moisture, it will contribute greatly to root rot. Since they need air circulation, they need to be kept in a pot that has plenty of openings. This makes regular potting soil an impossibility. It’s also just not a good idea because of the amount of moisture it can hold.

Avoid conventional potting mixes and stay clear of fads like using coffee grounds as fertilizer or as a soil amendment.

In commercial orchid bark, sphagnum moss it not generally used. However, if you are mixing your own medium, sphagnum moss is recommended for some orchids that prefer a bit more water or those about to bloom, as they will need additional moisture to support the flowers.

The large particles in the orchid mix makes drainage a snap. While the bark will absorb and therefore hold a bit of water, it will not pool in the container. The roots will not sit in that moisture that causes rotting and other diseases.

Orchid bark mix, whether purchased pre-prepared, or mixed at home, will make a significant difference in the health of your plant. Likewise, the use of more loamy soil can result in a very quick death. So, the answer to the question of whether to use bark mix when potting orchids is a resounding yes!

The exception I mentioned earlier is the Spathoglottis orchid. This orchid species is terrestrial, meaning it grows in the ground. You can find them on the floor of rainforests and in the mountains. It naturally grows from soil that is loamy and rich in organic matter.

When potting a Spathoglottis orchid, a mixture of 75% standard potting mix, and 25% bark or bark mix, will give an ideal balance for this specific plant.

With as vulnerable as orchid roots are to overwatering, poor drainage, and fungal infection, their potting medium is a very important factor in their overall health. Orchid bark mixtures allow for proper drainage and air circulation. They also offer some support to the root system of your orchid.

Orchid bark, or home mixed, bark based potting medium is the best environment for indoor, and indoor/outdoor plants being grown outside of their native environment. This type of medium helps to maintain the proper moisture levels in which an orchid can thrive. It also provides the best chance at living long enough to re-bloom.

How to Repot Orchids in 7 Easy Steps

Should You Water Orchids with Ice Cubes?

Have you heard that you can water an orchid with just ice cubes? Perhaps you've even considered trying it out? Many gardeners tend to have mixed feelings on this topic. In this article, gardening expert Melissa Strauss examines if watering orchids with ice cubes is just another gardening fad, or something you should put into practice with your plants. 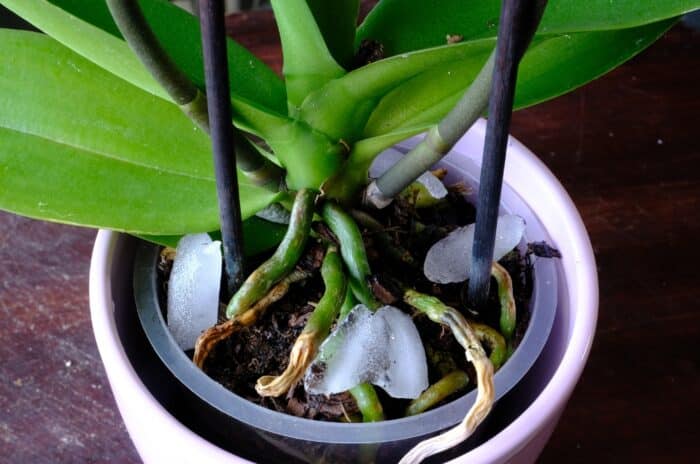 Are you thinking of welcoming an Orchid into your indoor or outdoor garden space? Curious to know if it will come back each season or if you'll have to replant it every year? In this article, gardening expert Melissa Strauss walks through if Orchids are considered annual, biennial, or perennial plants.

How to Repot Orchids in 7 Easy Steps

Are you thinking of moving your orchids into a new pot? While it sounds like it might take some work, repotting is actually quite common and easy to do if you follow the proper steps. In this article, gardening expert Melissa Strauss walks through seven simple steps to repotting your orchids.

Looking to add some cattleya orchids to your indoor or outdoor garden this season? These tropical flowers are both popular, and stunning to look at. In this article, gardening expert Melissa Strauss walks through everything you need to know about cattleya orchids and their care.

Thinking of adding a few purple orchids to your flower garden but aren't sure which type to add? There are many different shades of purple orchids, so picking the perfect flower can be a bit difficult! In this article, gardening expert Melissa Strauss looks at the some of the top purple orchid varieties you can grow!

Looking for a pink orchid to plant in your indoor or outdoor garden, and can't decide what to choose? There are many different pink varieties to choose from, so picking just one can be a challenge. In this article, gardening expert Melissa Strauss takes a deeper look at some of her favorite orchids that bloom in beautiful shades of pink!