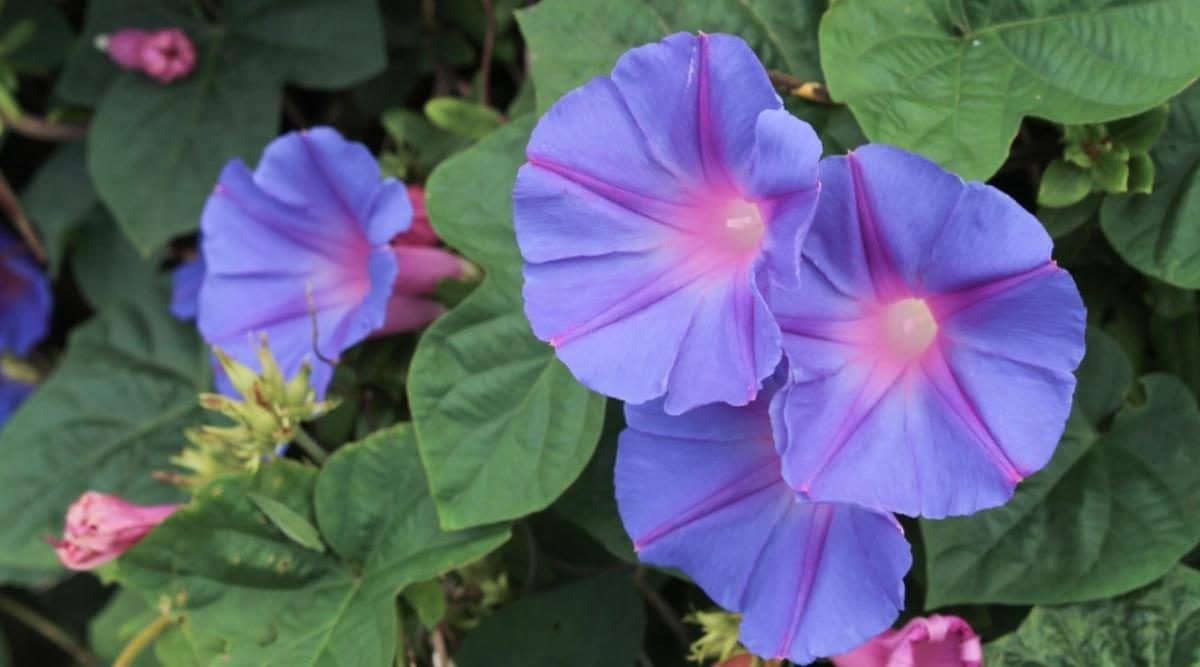 When planning a flower garden, it’s a usually good idea to plant both annual and perennial flowers for the best visual impact. This will give you plenty of flexibility in your garden goals. If you’ve decided you’d like to plant one of the many varieties of morning glory, these plants are well known for their hardy nature, and rapid (sometimes aggressive) regrowth.

Maybe you’ve heard they’re perennials, but the vine died when you’ve grown them. So, what’s the deal? Are morning glories annuals or perennials? The answer is fairly straightforward, and will largely depend on which hardiness zone you are planting them in.

But even in zones where they grow as annuals, they sometimes drop enough seeds in the fall to grow from seed in the following spring. Ready to learn more? Let’s jump in!

Morning glories prefer warm tropical climates. As such, they are considered perennial in zones 9-11. This means you plant them once, and they will return each year if you live within these hardiness zones. In USDA hardiness zones 2-8, they will be planted as an annual plant. This means they will grow one season, and die once the winter frost hits. If you live in zones 2-8, you’ll be replanting them each year if you want them to return.

Morning glories are technically perennials, returning year after year in zones where the temperature doesn’t regularly dip below 45 degrees Fahrenheit, like USDA zones 9 – 11.

They are grown as annuals in zones 2-8. They die over the winter, though they can drop enough seeds to regrow the following year.

The moonflower (Ipomoea alba), a night-blooming vine related to the morning glory, also survives as a perennial in zones 9-11 and subtropical areas around the world but grows as an annual vine where weather gets cooler.

Morning Glories: Both Perennial and Annual

The differences between perennials and annuals go beyond whether they come back every year. Perennials usually have a longer blooming period, so knowing which category a plant falls into tells you whether you can count on blooms for weeks or months.

Annuals usually bloom for a shorter period but produce more flowers while blooming.

Morning glories grown from seed won’t bloom for about 120 days from sprouting, so flowers don’t usually appear until August or September. The vines continue to bloom until the first frost. Vines that survive in warmer zones bloom earlier, usually in early summer.

These hardy vines can grow 10-15 feet in a single growing season and easily spread over trellises, fences, and arbors.

As each flower blooms, it opens early in the morning, hence the plant’s name, and dies before the next day. Fortunately, many new blossoms open each day during the short blooming period.

Moonflower vines bloom mid to late summer, depending on when they sprouted, and behave the same, except each fragrant white flower blooms at night and dies by the following day.

USDA zones cover the continental United States and Alaska, Hawaii, and US territories.

The zones range from the coldest zone of 1 to the hottest zone of 13. Each zone is approximately 10 degrees hotter than the previous one.

Zone 1: Morning glories won’t do well in the colder temperatures of zone 1, which typically spreads across the northernmost parts of Alaska.

Zones 2-8: These zones cover most of the United States and include the northern US with zones 2-5 and central to the southern US with zones 6-8. Winter temperatures get below 45 degrees in these zones, with many regions falling well below freezing for much of the winter.

Are they annuals or perennials in these zones? You’ll need to replant each year, as they are annuals in these zones, though in some of the warmer zones, as you get closer to the south, they can reseed and grow in nearly the same spot without replanting.

Zones 9-11: These zones are the peak hardiness zones for morning glories and include the southernmost United States. A strip along the west coast from Washington down to southern California falls into these zones, too.

The climate is excellent for them and winter lows typically stay above 45 degrees. In these zones, the vines can survive the winter temperatures.

Zones 12-13: These zones are primarily in Hawaii and Puerto Rico, with the hottest temperatures on the USDA zone map. They grow well in these zones and survive year-round, but they thrive in slightly cooler temperatures.

Some varieties like the fence morning glory (Ipomoea ochracea) are on the invasive plant species list as a weed in Hawaii and Puerto Rico.

In USDA zones 9 and above, you can grow them as perennials and avoid replanting every year. Mulch around the base can help protect the roots if temperatures dip lower than expected.

The vine grows fast and doesn’t require much maintenance, but pruning in the winter can help next year’s growth.

In early winter or late fall, when the vine’s blooming is over for the year, cut the plant back to about six inches in height. When spring comes, it will grow fast from that point and put on flowers earlier in the summer.

Pinching lateral stems and growth tips can help you control the length of vines and how bushy the plant grows. You can prune the vine back a little during the season without hurting it. Sometimes, pruning is necessary to keep it from spreading too far.

Prune moonflowers back in the same way, though this vine is less likely to take over like other varieties of morning glory can.

You can cut all varieties back to the ground after the blooming season and treat it as an annual you’ll replant next year if you want to, but it won’t bloom until about four months after the seeds sprout.

Since you don’t have to hope that the plant drops enough seeds to reseed itself in the spring, get in the habit of deadheading it. Once a flower blooms in the morning and closes by evening, it won’t bloom again.

Spent flowers pull nutrients and energy from the plant while they go to seed. Since the plant doesn’t have to support the seeding process, it can put energy toward more beautiful blossoms instead.

Removing deadheads and preventing seeds from dropping can help keep new vines from growing and prevent the morning glories from getting out of hand. These fast growers can take over garden spaces and choke out other plants if left unchecked.

Pros of Growing as Perennials

Cons of Growing as Perennials

Most people don’t get to choose whether to grow morning glories as perennials or annuals because of cold winter temperatures.

“Are morning glories annuals or perennials?” is a question answered by the climate.

In areas where the plants die in the winter, pruning them to the ground after it frosts will keep your garden neater. They won’t bloom or put on any new growth once the temperature dips low enough for frost.

To keep vines growing and spreading in the direction you want, you can pinch prune lateral growth tips to redirect nutrients and energy to the rest of the plant.

Trimming and pruning to shape and control the plant won’t hurt it, but severe cuts like a winter prune should only happen during dormant months.

If you’d like to avoid replanting the following year but love the look of morning glory vines, let some flowers go to seed and fall naturally. The chances are good that it will reseed itself.

You’ll get more blooms if you deadhead the spent flowers as soon as possible after they wilt. But if you let some go to seed and mulch around the plant’s base right before the first temperature dip, you’ll probably get new growth the following spring.

Moonflower vines often reseed themselves and grow again the next in the zones where they grow as annuals, and you can deadhead them or let flowers go to seed according to whether you want to replant.

Pros of Growing as Annuals

Cons of Growing as Annuals

Are morning glories annuals or perennials? They’re technically perennials, but people below zone 9 typically grow them and replace them each season.

If you must grow them as annuals, remember that letting flowers go to seed almost guarantees you’ll see new vines sprout the following spring, especially if you mulched the ground before freezing temperatures. Whether you grow these flowering vines as annuals or perennials, they produce big beautiful flowers you’ll enjoy in your garden every year.

Dwarf Morning Glory: How to Plant, Grow, and Care For Convolvulus Tricolor

Are you thinking of adding some dwarf morning glory to your garden? This lovely blue flower is quite popular due to its hardiness and ease of maintenance. In this article, gardening expert Madison Moulton walks through each step you'll need to follow in order to plant, grow, and care for Convolvulus Tricolor. 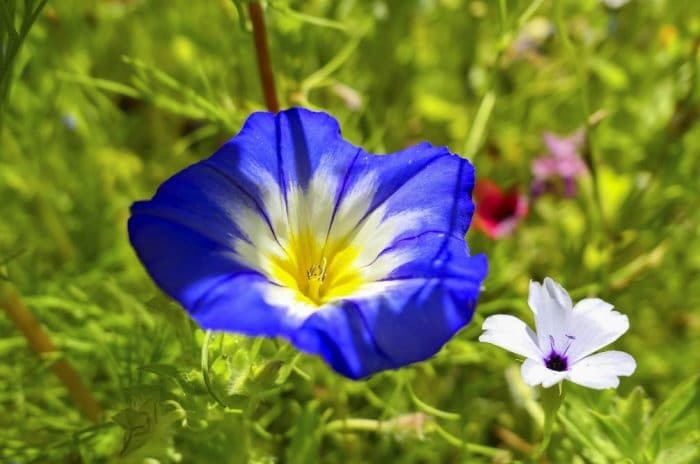 Thinking of planting a vine with orange flowers this season, but aren't sure where to start? The good news is, there are many different vines and climbers that sport bright, beautiful, orange flowers. In this article, you'll learn all about our favorite orange flowering vines, and where they can grow.

Did you find a weed with flowers in your yard, but aren't quite sure what it is? It's important to understand about weeds and if that type is harmful or beneficial to your garden goals. In this article, we examine the most common weeds with flowers to help you identify what stays and what needs to be relocated.

Looking for the perfect vine to climb a trellis or pergola in your garden? Not all vines are great climbers, so finding the right vine matters when picking a climbing vine. Climbers come in all shapes and colors, so there's plenty to pick from. In this article, we look at our favorite vines that will climb trellises, pergolas, or walls in your garden.

Thinking of adding a white flowering vine to your garden, but aren't quite sure where you should start? There are many vines that sport showy white blooms, and many will climb rapidly without much maintenance. IN this article, we look at our favorite white flowering vines to help you find the best fit for your garden!

Looking to plant some flowering vines in your shade garden, or somewhere in your garden that's shadier than the rest of the area? The good news is that there are many vines that will grow quickly, depending on your hardiness zone. In this article, you'll learn about our favorite flowering vines for shade gardens and shady areas, along with what zones they typically grow the best in!