Marigolds have many different uses in the garden, outside of being beautiful ornamental flowers. They are great for insect repellent and can provide plenty of diversity in just about any vegetable garden. But if you plant them, will they come back each year? In this article, we walk through if Marigolds are annual, biennial, or perennial flowering plants. 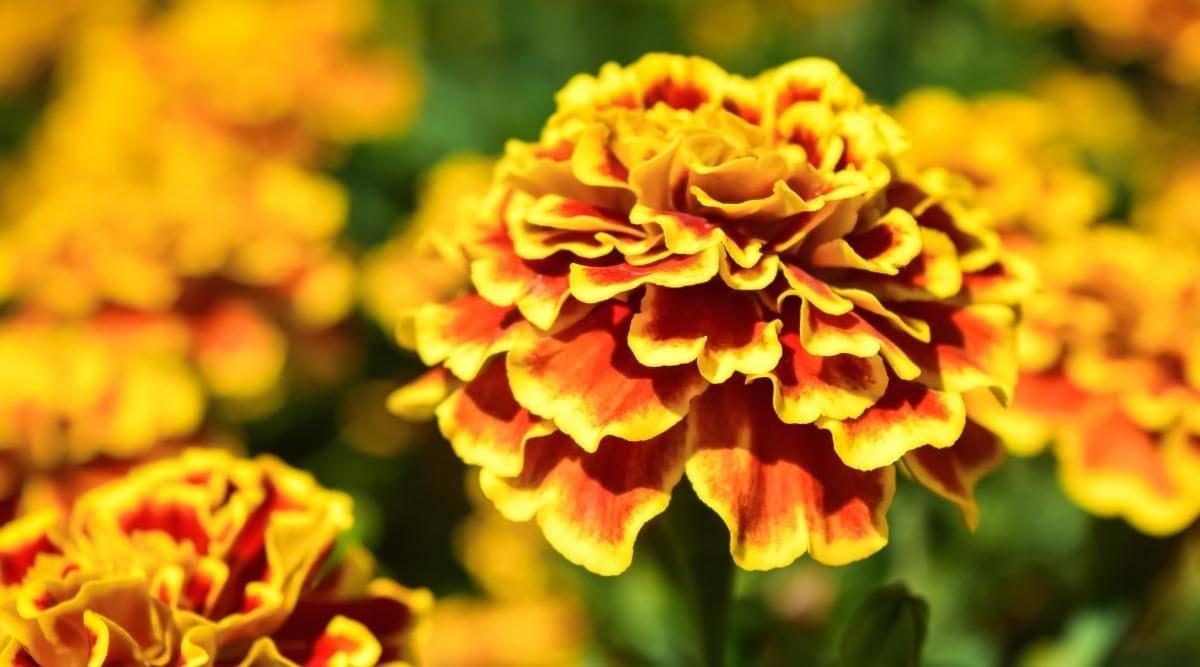 Are marigolds considered annual flowers or perennial flowers? That’s almost a loaded question. We need to make more than a few different considerations before we can answer that question, not least of which happens to be, what marigold are we talking about here?

You probably think of the marigold as the daisy-like orange flower that’s stem is filled with petals and has the overpowering aroma of musky hay or straw. It probably has one of the most exciting smells out there as far as flowers go.

But did you know that there are several types of marigolds, all of which look a little different? Most live in the same plant family as daisies, and they all have very distinctive features that help gardeners and flower enthusiasts differentiate between them. Before we discuss different marigolds, we should dive into the central question: are marigolds annual or perennial?

The answer is both. But typically, marigolds are treated as annual flowers regardless of the hardiness zone or climate. Certain varieties are grown more ornamentally as perennials, but these are not the typical orange or yellow flowering marigolds that most gardeners think of when growing or transplanting these popular flowers in their garden.

They also known for self-seeding, making them appear to be perennials. In reality, self-seeding means that the seeds on the marigold typically fall to the ground at some point in the life cycle, and they essentially replant themselves.

Even though you must replant most varieties each year, they are still widely considered one of the easiest plants in the garden. They’re also incredibly versatile, and they can grow in various soil types.

They are treated annuals but sometimes act like perennials. This means you might not have to replant them every year. They can survive by self-seeding for a long time, so you might have a healthy supply of marigolds for longer than you expected.

Their vibrant colors are a critical part of their charm. They have oblong leaves that are hairy on all sides. The petals typically grow in rings of at least two layers, although other types of marigolds have thicker heads with more petal rings.

Seeds can be sown in the autumn for vibrant winter color in parts of the world where mild winters are.

Marigolds can grow in zones 2 through 11. They will grow their best in warmer climates, during the spring and summer. However, they will grow almost anywhere besides northern Alaska with the proper care.

The only hardiness zones where they don’t grow well are zone 1, zone 12, and zone 13. Zone 1 essentially comprises the upper reaches of Alaska, and zones 12 and 13 mainly include Puerto Rice and some small parts of Hawaii. These areas have temperatures that are just too extreme for them to survive.

So excluding those three specific regions, they will grow just about anywhere in the United States. They do better in areas with very little freezing, especially if they have self-seeded.

There are many different marigold variations, and they are typically native all over the Americas and other parts of the world.

The marigold is a versatile plant that grows in most places around the United States. It also grows all over South and Central America and in parts of Europe and Asia.

Because this flower has multiple variations, it’s easier than other flowers to find worldwide. The African and French Marigolds are the two most popular types you’ll likely find at a local nursery.

The most common type of marigold is the African marigold or the Aztec marigold. It is native to the Americas and resides in the Asteraceae family and asters, daisies, and sunflowers. These flowers are the typical yellow or orange bloomed flowers that most gardeners think of when adding them to a flower garden.

Another common variation is the French marigold, native to Mexico and Guatemala. They have naturalized to many countries with warmer climates all around the world. These flowers are hardier and are perennial in warmer climates. But again, they are still typically grown as annuals.

The Mexican marigold is widely popular in Mexico and Central America. They are often treated as perennials, growing back from the sturdy root system each year. They are commonly grown as a shrub, and sometimes referred to as a “mountain marigold.”

The signet marigold looks slightly different from other variations, but it lives in the same Tagetes genus as most others. Signet marigolds don’t have the same thick rings of petals.

You can find the desert marigold in the northern deserts of Mexico and the southwestern parts of the United States. This variation is only loosely related to the marigold, but it lives in the same Asteraceae family. They are considered tender perennials, or biennials, and are a common native wildflower.

One of the reasons these flowers are so popular is because they can grow just about anywhere. Their prolonged survival makes them a pleasant addition to any flower bed for a pop of color. And when they bloom, they tend to bloom for a long time.

If a location is warm and sunny, marigolds can probably grow. They are extremely easy for gardeners of all skill levels because they will grow almost anywhere. The only thing that they don’t like is frosty climates with harsher winters.

Marigolds don’t do well in the cold. However, you can take measures to protect them from frost and mildly cold temperatures, such as spreading a blanket of mulch or utilizing heat lamps to keep them warm.

Typically, when the temperatures hit the freezing mark, marigolds don’t survive. Insulation is the best bet for keeping them warm and safe when the first frost hits. You can also cover them at night if you’re concerned about overnight temperatures.

Certain types are drought-resistant, like the African and French marigolds. Some are also naturally pest-resistant and will grow almost all year long with very little care on your part.

Generally, marigolds are low-maintenance flowers. As long as there’s plenty of sunlight, they’re happy. The only thing that they don’t like is the extreme cold. Otherwise, they grow in various climates and almost all soil types.

As long as the soil is moderately fertile, marigolds can even survive drought conditions. They also survive without lots of water. When you water, make sure you water them at the pant base. The flowerhead will rot with too much moisture.

For many gardeners, deadheading flowers is one of the most satisfying garden maintenance tasks. But with marigolds, you don’t have to deadhead them routinely. You might increase the length of their bloom if you do, but it’s not necessary to keep them healthy and thriving.

Weeds are no good for marigolds. You can weed around the plants regularly or put down a layer of mulch in between the plants. The mulch will help keep the weeds and bay and keep your marigolds healthy.

Marigolds are a great flower to have around. Not only are they low-maintenance, but they offer several other benefits, including:

Marigolds are highly versatile and serve both practical and aesthetic purposes. They can grow almost anywhere, and they don’t require much work to thrive.

If you’re looking for something colorful to add to your garden selection, the marigold might be the thing for which you’re looking.

Which Marigolds Are Perennial?

Some marigolds are perennials, returning every year without self-seeding. For example, the marsh-marigold is a perennial plant that tends to spring up in marshes and wetlands. Desert marigolds, and French marigolds are also considered perennials.

The tree marigold, sometimes called a Japanese sunflower, is annual and perennial. Whether or not it sticks around all year depends on the part of the world where it grows.

Growing marigolds provide an opportunity to have a beautiful flower that blooms for a long time and doesn’t require too much work. You can get many benefits from the marigold, and you can grow them just about anywhere.

While most marigolds are annuals, some varieties are treated as perennial and can rebloom the following season because they self-seed. Pick according to your garden needs, and you’ll have a beautiful, new type of flower blooming this season in no time!

How to Plant, Grow, and Care For Ranunculus

How to Plant, Grow, and Care For Begonias

Begonias are beautiful flowers that are quite hardy and can be grown in a variety of different locations. If you've decided to add begonias to your garden this season, there are some important factors to consider when maximizing their growth. In this article, certified master gardener and begonia enthusiast Laura Elsener provides exact steps to plant, grow, and care for Begonias. 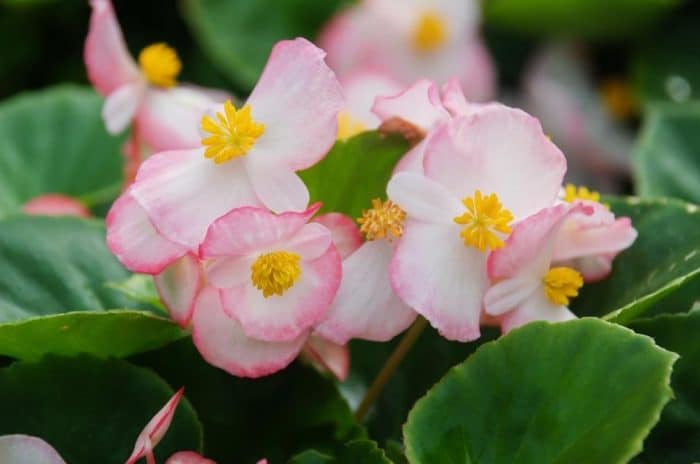 How to Plant, Grow, and Care For Ranunculus

If you are looking for a bright flower to compliment your garden this season, you should consider growing ranunculus flowers for their bright, and beautiful appearance! In thiis article, cut flower farmer and gardening expert Taylor Sievers walks through how to plant, grow, and care for ranunculus in your garden!

Dahlias are some of the most beautiful perennial flowers you can add to your garden. But which types of dahlias should you add this season? While the flower lover in me says add "all of them," there simply just isn't enough room to do that. There are thousands of dahlia cultivars you can plant, so we've selected some of our favorites to show you how beautiful these flowers can be!

Looking to plant some flowers that look similar to roses, but aren't sure what to plant? Roses are beautiful flowering shrubs, but many gardeners don't want to deal with the upkeep that they require. In this article, we look at some of our favorite rose lookalikes to give you some different planting options for your garden.

Are you thinking of adding some flowers to your garden but aren't sure which ones to add this season? The chrysanthemum is one of the most popular flowers in the entire world. In this article, flower expert and farm owner Taylor Sievers walks through how to get the best results when you plant, grow, and care for chrysanthemums in your garden.

There are many different types of Zinnia varieties, so picking just one type to plant can be extremely difficult to do! These easy to grow annuals are a favorite amongst many flower gardeners. In this article, gardening expert and cut flower farm owner Taylor Sievers looks at over 20 different zinnia varieties you can plant this season.

Thinking of planting some peonies, but aren't sure which ones to plant? There are many different types of peonies, that have different colors and growing conditions. In this article, certified master gardener Laura Elsner walks through her favorite peony varieties to add to your garden this season.