Not quite sure what sun orientation your lavender should have this season? Lavender can be tricky depending on the variety you grow. In this article, gardening expert and former organic lavender farmer Logan Hailey examines if lavender should be grown in full sun, partial sun, or full shade conditions! 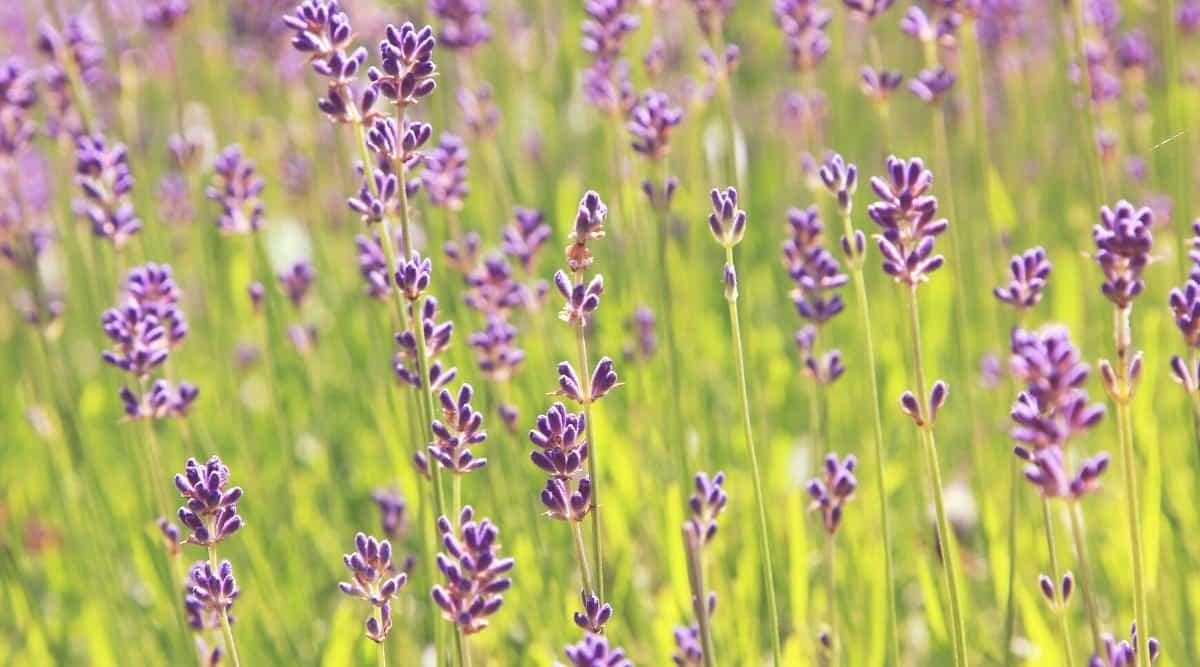 There is nothing quite like stepping into a spring garden with the sweet aroma of flowering lavender. This vibrant perennial flower is a magnet for bees and humans alike. It has been used for thousands of years in perfumes, recipes, cleaning supplies, and herbal remedies.

When used for its scent, lavender is coveted for its calming energy. In the garden, it is highly regarded for its easygoing demeanor. But where exactly does lavender prefer to be planted? How can you optimize the growth of this lovely Mediterranean herb?

If you want to enjoy lavender blooms for years to come, you’ll want to be sure to plant it a place where it gets ample sunshine and plenty of soil drainage. Here’s everything you need to know about lavender’s sunlight requirements, as well as some tips for growing the healthiest lavender shrubs around.

Lavender plants thrive in full sunlight and are not very happy in the shade. They need at least 6 hours of direct sunlight per day, ideally 8-10 hours during the growing season. While a little bit of afternoon shade in southern climates could be helpful, regular partial or full shade can significantly slow lavender’s growth and flower production.

Lavender is native to the dry, sunny slopes of the Mediterranean where it enjoys full direct sunshine for 6-8 months of the year. These arid coastal regions are characterized by rocky soils, intense sunshine, hot summers, and mild winters.

In its wild habitat, this fragrant herb grows at higher elevations with harsher sun exposure. It loves to be as dry as possible and absolutely loathes sitting in wet or waterlogged soils. Lavender is like a tanning bed addict: it simply can’t get enough sunshine.

The spring and summer seasons are the most important times for lavender to receive full sunlight. If it remains evergreen in your climate (growing zones 7-10), it will definitely need full sun exposure throughout the year.

If you are growing in a colder climate (zones 4-6) or in a container, it won’t need as much sunlight during its dormancy. Many container gardeners actually bring lavender into a cool, well-circulated indoor area like a covered porch or south-facing window during the winter.

Sunlight is the fuel for lavender’s energy production. Like all plants, this herb uses photosynthesis to create the sugars it needs to thrive. The chloroplasts located inside leaves take in light and transform it into plant food.

This process of photosynthesis requires sunlight, carbon dioxide, water, and minerals to yield glucose and oxygen.

Sunlight is the main limiting factor of this process. Without enough light hitting the chloroplasts of leaves, the plant cannot perform necessary photosynthetic reactions.

Lavender is particularly vulnerable to a lack of light because its leaves tend to be more grey or silver-toned, which means it has fewer chloroplasts than brighter green plants. Interestingly, this popular shrub evolved silvery foliage to help reflect solar radiation and keep it cool on the craggy, intense mountaintops of the mountainous Mediterranean coast.

But when it’s brought into other regions with less heat, more humidity, or lower elevations, it must adapt to the different conditions while still meeting its photosynthetic needs.

How Much Sunlight is Enough?

Lavender thrives best with 6 or more hours of direct sunlight, but 8-10 hours is ideal. Unfiltered sunlight is particularly important because dappled shade or the shadows reduce the photosynthetic capacity of lavender’s chloroplasts.

However, don’t worry if you have some cloudy days. As long as lavender has nothing blocking its sunlight, it can still get by on about 3 hours of morning sun and 3 hours of afternoon sun.

If you live in a region with lots of cloudy weather (such as the Pacific Northwest), choose a variety such as ‘Hidcote’, ‘Royal Velvet’, or Spanish lavender and widen the spacing to improve circulation.

Most of us aren’t growing lavender just for its leafy foliage. We want those beautiful, sweet smelling flowers to grace our gardens and homes! Flowers are known for their sunshiney demeanor, so it’s no surprise that it needs as much sun exposure as possible to yield an abundance of fragrant blooms.

The main compounds that make it smell so delicious are called linanools an lavandulols. There are also trace amounts of eucaloyptol and camphor.

However, the production of these essential oils in their blooms directly depends on sunlight exposure. When it doesn’t get enough sun, it doesn’t have the energy to funnel into extra oil production inside the blossoms.

Lavandin varieties are known for the highest essential oil content. In particular, Lavandula x intermedia ‘Grosso’, ‘Phenomenol’, and ‘Provence’ are the most fragrant of all cultivars.

Many of the most common lavender diseases are due to a lack of circulation or an excess of moisture. Direct sunlight prevents humidity and rainwater from settling on lavender leaves. In turn, this drastically decreases the risk of fungal pathogens taking hold of the plant.

Warmth also helps prevent the soil surface from becoming waterlogged. As the sun heats the ground, the soil can dry out more quickly after rain and morning dew. Mulching near the base of the plant with pea gravel or stones accelerates this warming, drying effect.

Avoid Planting in Shade of Other Plants

During landscape and herb garden installations, it is common to plant lavender alongside rosemary, rhododendrons, or sage. However, improperly spaced plants and smaller varieties risk getting shaded out by shrubs and trees as they grow in size.

It’s important to understand the solar aspect of the area before planning your perennial herb garden. The solar aspect angle is just a fancy term that refers to how the sun moves across the sky over your garden during different parts of the year.

For example, you may notice that the summer noon sun radiates into your garden perfectly, but the lower-lying autumn afternoon sun ends up casting a shadow from your house.

Lavender prefers the most open, south-facing areas of the garden where trees, shrubs, structures, or buildings won’t shade it out.

If you absolutely must plant lavender in a partially shaded part of the garden, certain lavender varieties are more willing to tolerate the lack of sunshine. Spanish Lavender, French Lace Lavender, and French Lavender may be slightly more shade tolerant than other types.

Some notable varieties include:

Keep in mind that the shade tolerance is minimal and all varieties may suffer from reduced vigor or less flower production in these conditions. Most of these varieties still need at least 6 hours of sunlight per day to grow optimally.

Afternoon shade may be tolerable as long as the morning sun hits the plants head-on. Because it won’t receive the typical soil-warming effect of direct sunlight, it is also important to prepare extra well-drained soil.

Does lavender need a lot of sunlight?

Lavender insists on as much direct sunlight as possible, with a minimum of 6 hours per day. It generally dislikes shade and may suffer from reduced vigor, less flower production, and more disease pressure if it doesn’t get enough sunlight.

Can lavender grow in direct sunlight?

Direct sunlight is crucial for the healthiest, most vibrant plants possible. It not only tolerates hot, drought-like conditions, but it actually thrives in these conditions.

Does lavender grow in the shade?

Lavender is a sun-craving plant. It strongly dislikes shade and can even die from a lack of sun exposure. Due to its Mediterranean origins on the hot exposed slopes of Europe, it has evolved to grow in at least 6-8 hours of direct sunlight per day.

In order to ensure the most vigorous lavender plants possible, plant in an area with direct sunlight for 8+ hours per day all year long. Ideally, this is a south-facing part of the garden that is out of the shade of trees or nearby structures. If you don’t have enough full-sun planting beds, you can opt for more partial-shade tolerant varieties like Spanish lavender and French Lace lavender.

How to Grow Lavender From Seed in 7 Simple Steps

How to Propagate Lavender From Cuttings in 7 Simple Steps

21 Plants That Can Grow in Poor Soil Conditions

Why is My Lavender Plant Dying? How Can I Fix it?

Lavender is a very popular plant and it has many uses. It can be used in cooking, essential oils, and some people just like it for the amazing smell it produces. But what happens when you grow a lavender plant, and it starts dying for what appears to be no reason? In this article, amateur gardener Jason White examines the most common reasons your lavender plant may not be doing so well. 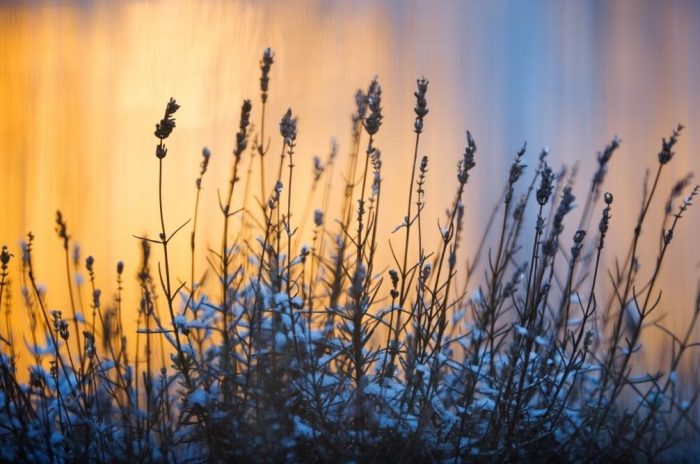 How to Grow Lavender From Seed in 7 Simple Steps

Thinking about growing lavender from seed, but aren't sure where to start? Lavender can be grown several different ways, but growing from seed is one of the most popular. In this article, organic gardening expert Logan Hailey (who has worked at one of the largest lavender farms in the United States) walks through how to grow lavender from seed by following seven simple steps!

How to Propagate Lavender From Cuttings in 7 Simple Steps

Looking to propagate lavender from cuttings this season but aren't quite sure where to start? Propagation fromk cuttings is one of the most popular ways to expand your lavender crop. In this article, organic gardening expert Logan Hailey walks through 7 simple steps for successfully propagating lavender in your garden.

Looking to add some ground cover to your garden, but want to make sure that it doesn't require consistent watering? There are many drought tolerant ground covers, so picking just one can be a challenge. In this article, we look at some of our favorites, with names and pictures of each!

21 Plants That Can Grow in Poor Soil Conditions

How to Plant, Grow, and Care for Mint in Your Garden

Have you considered growing mint in your garden, but really aren't sure where to start? Mint can be an excellent addition to any garden if you can handle the fact that it likes to take over certain areas very quickly. In this article, gardening expert and farm owner Taylor Sievers walks through each step of how to successfully plant, grow, and care for mint in your garden.

Can Marigolds Be Planted Together With Lavender?

Trying to figure out if Marigolds can or should be planted next to your lavender this season? These two popular plants are well known garden companions for other plants. But are they also good together? In this article, gardening expert Natalie Leiker examines if it's a good idea or not to plant Marigolds next to Lavender in your garden.