Is Lavender an Annual, Biennial, or Perennial Plant?

Thinking of planting some lavender this season, but aren't sure if it will be a one year plant, or if it will come back next season? This is actually a common question many first-time lavender gardeners have. In this article, organic gardening expert and lavender enthusiast Logan Hailey examines if lavender is annual, biennial, or perennial. 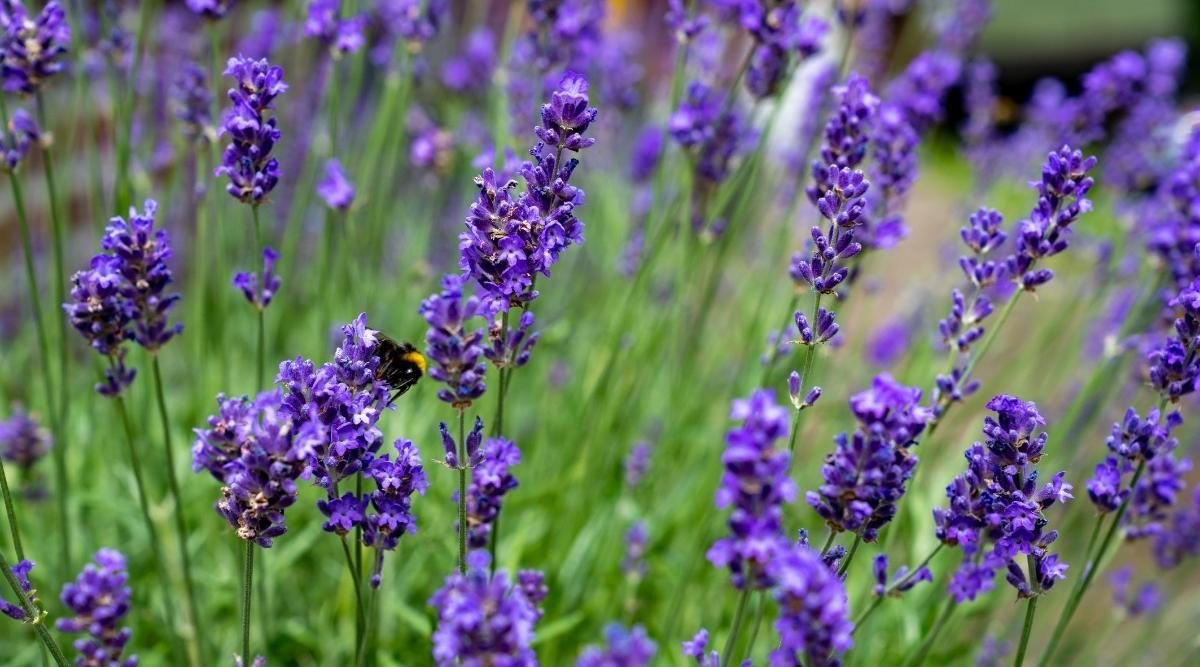 Known for its blissful fragrance and charming pastel purple flowers, lavender is a staple for any herb garden. There are hundreds of varieties of lavender adapted to certain regions and uses. But you may be wondering: is Lavender an annual or a perennial plant?

In spite of their delicate blossoms, these drought-tolerant plants are surprisingly hardy and resilient. They are one of the few plants that actually perform better with a bit of neglect. Lavender is easy to grow, can handle most soil types, and loves the heat.

So how about lavender? Will it keep growing back year after year in your garden, or will it need to be replanted every season? The answer as usual, depends on several factors. Let’s dig into the details around whether or not lavender is an annual or perennial plant.

It depends on your climate. Lavender is an herbaceous perennial plant native to the dry sandy soils and blazing sun of the Mediterranean region. It grows as a perennial in most climates, but sometimes lavender is mistaken for an annual because it will die when exposed to excessively cold temperatures.

In growing zones, 5 through 10 lavender is technically a woody, perennial, evergreen shrub. When growing in zones 3 through 4, it will go dormant and die back in the winter. In zones 3 and colder, lavender typically dies in the first hard frost unless it is protected or brought indoors.

Lavender is a dazzling shrubby herb that has been coveted for millennia thanks to its aromatic, medicinal, culinary, and ornamental uses. With over 450 different lavender varieties of 45 species belonging to the Lavandula genus, this classic fragrant plant grows in a marvelous diversity of sizes, colors, shapes, and scents.

These perennial shrubs grow in USDA zones 5 through 10, with a handful of cold-tolerant English cultivars adapted to zones 3 and 4. Lavender is a bit of a mix between a semi-woody and herbaceous perennial shrub:

Lavender grows several woody stems from its base that increase in diameter as the plant grows in height and width with each season of growth. Proper pruning can decrease woodiness, however, the woody old growth can help it live for 10 years or longer.

Lavender is only partially herbaceous because the softer (non-woody) stems of the plant only partially die back with the foliage in areas with cold winter months. Truly herbaceous plants die back all the way to the ground when they go dormant. Lavender, on the other hand, has woody central stems that tend to remain upright. Many gardeners prefer to keep it pruned in a way that it produces more herbaceous mounds and discourages woody growth.

Most lavender plants come back year after year and can live for up to 15 years or more. French and Spanish lavenders are more susceptible to frost damage and may not grow back after a harsh winter.

Like rosemary or sage, lavender can be deciduous or evergreen depending on the climate.

As you can tell, the climate, variety of lavender, and care methods (especially pruning and soil preparation) are the main determinants of lavender’s growth as an annual or perennial herb in your garden.

Lavender is botanically considered a perennial plant because it lives longer than two years and grows semi-woody growth that persists into the following season. However, it can be grown as an annual in certain settings. To understand the difference between these life cycles, let’s review some basic definitions:

Like many of our common vegetable crops, annual plants complete their life cycle from seed to flower to fruit in a single growing season. Some non-annual plants can be grown as annuals in cold climates

Plants that take two years to complete their life cycle are considered biennials. They typically grow roots, leaves, and stems in the first season and then dedicate the second season to producing flowers, fruits, and seeds. Many common brassica vegetables like broccoli and kale are technically biennial plants.

Perennial plants include trees and shrubs that live for 2 years or longer. There are long-lived perennials (such as Redwood or Oak trees which can live for many decades) and short-lived perennials (such as Bee Balm or Tulips) which tend to live for 3 to 5 years before expiring. Most lavender varieties lie somewhere in the middle and can survive for 8-15 years with proper care in a warm growing climate.

Growing as an Annual

Because it usually blooms in its first year of planting, you can grow lavender as an annual that you replant each year. However, you may not be able to reap the full benefits of this gorgeous plant that tends to bloom most profusely in its maturity.

Lavender tends to thrive in the arid West where it can be grown as a true perennial. In ultra humid climates such as the American south, it is often grown as an annual because it does not thrive in extremely moist conditions. In very northern regions, it’s also grown as an annual or it is kept in pots to bring indoors during the harsh winter months.

If you intend to grow lavender as an annual, opt for fast-growing cultivars such as ‘Lady’, ‘Sweet Lavender’ or ‘Pinnata Lavender’ that will grow quickly and flower at the end of their first season. For more reward in a single season, it is usually best to purchase an established plant from a local nursery or root lavender from cuttings in the spring rather than starting from seed.

Some varieties, such as ‘Provence Blue’ may not bloom very well until their second season, which makes them less desirable for annual production. However, Spanish varieties (also called butterfly lavender or Lavandula stoechas) will eagerly bloom throughout the summer during their first year.

Growing as a Perennial

If you want to keep lavender around for many years to come, be sure to choose the right variety for your climate. Most lavenders can only tolerate mild winters, with the exception of extremely cold-hardy English lavender cultivars like ‘Munstead’ or ‘Hidcote’ that can handle down to -10°F in their dormant state.

Once you pick the proper variety for your climate and desired uses, preparing well-drained soil is the secret to growing the healthiest, most attractive lavender in your garden. Lavender prefers ultra well-drained, sandy or even gravelly soils to thrive. This is especially important during winter months when the ground can get waterlogged (which lavender hates).

Before planting lavender, thoroughly mix sand, gravel, peat moss, vermiculite, or organic matter into the soil at least 6-12” deep. Consider planting lavender in mounds or raised beds for added drainage benefits. Use a broad fork to loosen the deeper layers of soil without the need to rototill.

You also need to make sure the soil is not too acidic. Lavender prefers a slightly alkaline pH between 6.7 and 8.0. Lavender will be very short-lived in acidic soils below 6.5, and may even randomly die off! To prevent this, check your soil pH and amend it with lime or wood ash to move it toward a more alkaline state.

When planting, be sure to loosen any root-bound regions of the roots. This will ensure that they will quickly grow outward into the surrounding soil. Lavender only needs regular watering during the first month or so of the establishment. Afterwards, you can cut back on irrigation to make sure that the roots are not subject to rot or disease. As a perennial plant, this herb is remarkably drought tolerant and most commonly suffers from overwatering rather than underwatering.

The final key to growing happy perennial lavender is proper pruning. Most gardeners prune their perennial plants once in the spring and again in the fall. Pruning keeps lavender from getting too woody and also encourages more floral growth. Unpruned lavender is more likely to look scraggly, misshapen, and leggy.

The first pruning is often done as part of your spring harvest. Simply cut back the green new growth to an inch or so above the woody portion. Avoid cutting the woody bases of the stems and leave plenty of green on the tips. This will help to encourage new growth and maybe even another flush of flowers. You can use this initial pruning to help train your plant to grow in a more mounded shape.

The second pruning is in late summer or early fall and may coincide with the second round of flower harvest. But don’t cut back too hard to ensure that the plant has enough green leaves and stems left to sustain it through the winter. If you cut back into the woody center, it may not survive another year.

However, proper fall pruning will help the lavender plant channel its energy into establishing a strong root ball and woody base to get through the cold. Sometimes it helps to mulch with pea gravel or a garden blanket fabric to add extra warmth.

Lavender usually remains evergreen in zones 6 and warmer. In colder regions, it may drop its leaves, keep upright twigs through the winter, and regrow its foliage in the spring.

At the end of the day, lavender is a perennial in its native climate of the Mediterranean. But the lines between annual and perennial plant life cycles get blurred as we move them around the world to different regions and growing zones.

Lavender reaches its full glory in zones 5-10. This is where it can grow larger and more abundantly year after year as a semi-woody perennial herb. However, growing lavender as an annual or a potted plant can still be worthwhile in extremely humid areas like the south or extremely cold areas of the north. Regardless of how you try to grow it, Lavender makes a wonderful addition to any garden!

How to Plant, Grow, and Care For Coleus Plants

Are you thinking fo adding some blue flowering shrubs to your home garden? There are a number of different bushes with blue flowers to choose from when picking out a new shrub for your home garden space. In this article, we take a deeper look at our favorites, with names and pictures of each! 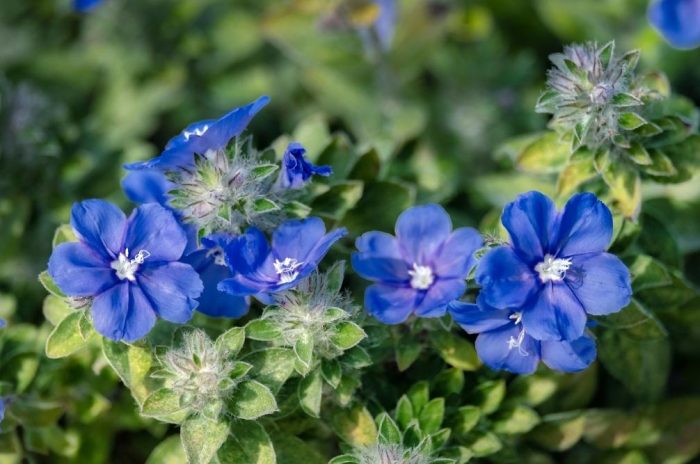 Hostas are extremely versatile plants, and can add some lovely ground cover to your yard or garden. But what plants grow best with them in the garden? Which ones look the best together? In this article, certified master gardener and hosta enthusiast Laura Elsner examines the best companion plants for hostas in your garden.

How to Plant, Grow, and Care For Coleus Plants

Coleus is a versatile shrub, that grows well in shady areas/ Some varieties that can grow quite well in sunny spaces. Growing coleus in your garden can provide that additional "pop" of color that you may be missing. In this article, certified master gardener and coleus enthusiast Laura Elsner teaches you how to plant, grow, and care for coleus!

Thinking of planting blue hydrangea but aren't sure which variety to choose from? The good news is that you have plenty of different options to choose from! In this article, gardening expert Jill Drago examines her favorite blue hydrangea varieties to plant in your home garden space!

Do you need some shrubs for shady areas of your garden? Perhaps you are creating an entire shade garden but aren't sure which shrubs to plant? The good news is, there are plenty of shade loving options, no matter your hardiness zone or geographic location. In this article, we look at our favorite shade-loving shrubs.