Is Aloe Vera Considered a Cactus or a Type of Succulent?

Not sure if Aloe vera is considered a type of succulent or a cactus? Or if there's even a difference between the two? This is an important factor to consider in order to understand maintenance requirements. In this article, gardening expert Emily Horn takes you through Aloe's classification so you know what you can expect. 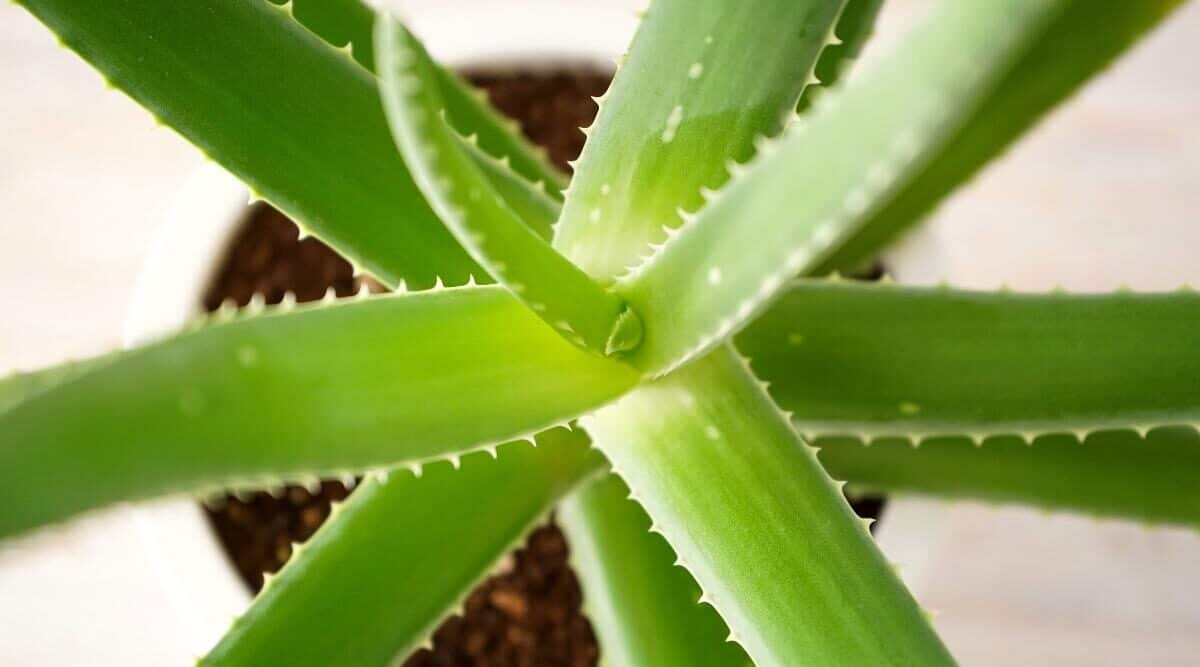 However, thinking back to high school geometry, I distinctly remember learning that all squares are a type of rectangle, but not all rectangles are squares. My young impressionable mind was seriously confused by such a statement.

Now, I can make a a similar comparison between cacti and succulents. All cacti are indeed succulents, but not all succulents are cacti. Clear as mud, right? Let’s delve into why succulents, specifically aloe vera, are undoubtedly NOT cacti.  We will look at the primary differences between the two desert natives.

Aloe vera is not a type of cactus. The Linnaean Classification System is the method by which all living things are classified based on specific character traits and genomes. Plants are placed into botanical families based on the physical characteristics and arrangements of their reproductive structures, otherwise known as flowers.

It belongs to the botanical family Asphodelaceae whereas true cacti belong to the family known as Cactaceae. The flowers look nothing like the flowers of cacti, even to the naked eye. When you dive deeper, the arrangement of DNA between the two plant families is also different, causing distinct physical differences.

We know that both types of plants are related to an extent. Both are plants, and both produce flowers and can bear fruit, instead of cones with unprotected seeds. Both plants have adapted and modified certain physical characteristics in order to survive a desert environment.

Aloe and cacti can protect themselves from predators desperate to quench their thirst by consuming the wet, thick flesh of the plants. Both like warm, dry climates and can go extended periods of time without water. Propagation of cacti and aloe is done using the same methods.

However, despite having similar plant parts, and anatomy like stems, flowers and leaves, the ways that each type of plant’s parts function, and physiology, are quite different.

First, let’s look at where both plants are native. Based on Ancient Egyptian artifacts depicting drawings of the aloe plant, we can determine that aloe originated in areas of the Mediterranean as well as the Middle East. Cacti are considered ‘New World’ plants, thus being native to the Americas.

Because of their native environments, Aloe needs less water than other types of plants. Cacti are similar, as they typically exist in dry, arid environments.

Because of their widely distanced geographic locations, each of these types of plants have made physical adaptations, or changes, to their functions and outward appearances, in order to survive. Succulents, like aloe, have the characteristic fleshy, thick leaves that are great at storing water for extended lengths of time. Many succulents, including Aloe vera, can be propagated from a single leaf.

The exterior of succulent leaves are often waxy, helping to eliminate water loss that occurs during transpiration. If it weren’t for the waxy coating, succulents would never survive the unpredictable rainfall of a desert environment. They wouldn’t be able to replace water faster than they would lose it in such a dry, arid climate.

Cacti, on the other hand, have virtually no leaves at all, or leaves that are not visible to the naked eye. In place of leaves, many cacti have sharp spines over the entire exterior of the stem. Often, these spines are found in clusters at leaf axils, where you would normally find leaves. Spines have different purposes on cacti.

One of the jobs that spines have is to protect the cactus from being eaten. Water is scarce in the desert, and many plant eating creatures could easily munch on cacti to receive much needed moisture from the plant tissues.

It’s rather difficult to take a good bite out of a cactus if it’s covered in spines, or if you do attempt to take a bite, your mouth will be poked by the spines…a lesson that many animals learn the hard way.

Another reason cacti have spines is to help provide shade for the stem. Desert light levels are intense, and spines can actually keep cacti from overheating. If a cactus was to get too hot, cell damage will begin (What do you do when you cook vegetables? You add heat to them. Desert temperatures can get so high that plants essentially begin to cook in direct sunlight)

The stems of both plant types play different roles within each plant grouping. Both succulent and cacti stems would be the origin of any flowers that form, and be the point of contact for any leaves or leaf modifications, like spines, to attach to the plant.

But, unlike succulents who store water in their leaves, cacti stems take on the role of water storage. Plus, since the leaves are not either not present or microscopically small, photosynthesis, the process of plants producing its own food, occurs in the stems of cacti. Succulents do all their food making in leaf tissue.

Both plant types are considered flowering plants. However, the flowers are distinctly different. Aloe vera flowers on a long stalk protruding from the center of the stem. The flowers can vary in length from 4”-24” depending on the size of the plant.

Flowers are trumpet-shaped, similar to a lily, and come in colors such as white, yellow, and orange. Aloe typically flowers in the late fall or early winter during the time of active growth.

In contrast, cactus flowers are often short, brightly colored flowers that are close to the cactus stem. Cactus flowers have many petals, in colors that range from white, yellow, oranges, pinks, and purples. In the center of each flower are multiple stamens or long stem-like strands. These stamens contain the pollen of the cactus flower.

The reason for so many stamens is because with more stamens it’s more likely for the cactus flower to become pollinated (in comparison, most flowers have four to five stamens, cactus have dozens on one flower). Cacti typically bloom in the spring and summer, as rainfall, temperatures, and day lengths are ideal.

Yes, they do flower. However, there are many factors that can play into flowering, especially under household conditions.  The age of the plant, sunlight levels and time of year all influence flowering. Mature plants are more likely to flower as is a plant that grows under bright, indirect light. Most plants go dormant during the summer, so like other flowering succulents, blooms appear after dormancy is broken, fall to early winter.

My aloe’s leaves are thin and leathery. Why?

When aloe vera is underwatered, the leaves will go from being thick, fleshy and green to a thin, tough, gray green appearance.

Check your aloe weekly for water, although watering may not be necessary. When you do water your aloe be sure to water thoroughly, allowing the soil to become completely saturated, but excess water being allowed to drain away. After a day or two of a thorough watering, you should see your leaves perk up. If not, you may need to check the roots to see if anything has died back due to the drought-like conditions.

I took my aloe vera outdoors. When should I bring it back inside?

Yes, this aloe can easily adapt to spending its summer outdoors. However, you will need to watch the night time temperatures to be sure they stay above 50℉. Otherwise, symptoms of cold damage may result.

Even though aloe vera likes similar conditions as cacti, after examining the differences between how each plant is assembled and how it operates, it makes more sense as to why aloe is not a cactus. Looking at things like where water is stored, where food is made as well as dormancy and flowering times, these two plants are distinctly different.

However, the fact that these two different plant species have both adapted and mutated in ways to preserve each of their respective genetic lines, is quite incredible, especially under desert conditions.

How to Grow and Care For a Christmas Cactus

How to Prune Aloe Vera Plants in 7 Easy Steps

How Much and How Often Should You Water Your African Violets?

How Big Do African Violets Get When Grown Indoors?

27 Pink Succulents That Will Add Color to Your Indoor Garden

Looking to add a pink succulent to your indoor plant collection, but aren't sure where to start? There are many indoor succulents to pick from, so finding the perfect plant can be a challenge. In this article, we look at our favorite pink succulents with names and pictures of each! 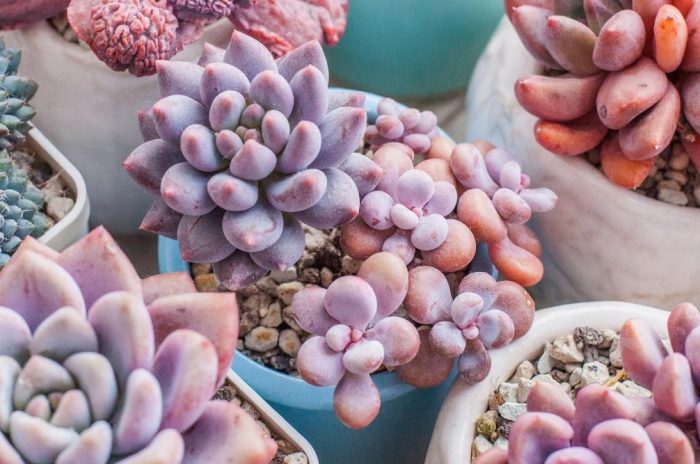 How to Grow and Care For a Christmas Cactus

Thinking of adding a Christmas Cactus to your indoor or outdoor gardening space? These popular succulents aren't only popular during the holiday season. In this article, gardening expert and houseplant enthusiast Madison Moulton takes you through everything you need to know about the Christmas Cactus and their care.

How to Prune Aloe Vera Plants in 7 Easy Steps

Does your aloe vera need a trim? Aloe vera is a pretty forgiving plant, but that doesn't mean you should just start trimming away without a plan. In this article, gardening expert and succulent enthusiast Emily Horn walks through a few easy steps to successfully prune your aloe vera plant.

How Much and How Often Should You Water Your African Violets?

Are you unsure how much water your African violets need, and how often they should be watered? These beloved flowering houseplants have different watering needs compared to other houseplants, especially if you expect them to bloom. In this article, gardening expert Liessa Bowen provides watering advice for your indoor African violets.

How Big Do African Violets Get When Grown Indoors?

Are you growing African Violets indoors this season, but want to know just how big they will get? While this may vary depending on a few different factors, they will generally only get to a certain size when indoors. In this article, gardening expert Liessa Bowen walks through how big you can expect your African Violets to get when grown indoors.

How to Propagate Chinese Money Plants From Cuttings or Offsets

Are you trying to increase the number of Chinese money plants you have by propagating them? This can actually be done from either stem, or leaf cuttings. In this article, gardening expert and houseplant enthusiast Madison Moulton walks through how to propagate the Pilea from stem or leaf cuttings in a few simple steps.

How Much Sunlight Do Ghost Plants Need?

Ghost plants are popular succulents, but many new owners aren't sure how much sunlight they actually need. In this article, gardening expert Emily Horn walks through the direct and indirect sunlight needs for ghost plants, and their ideal location once they are placed in your home.