Are you unsure why the flowers are falling off your orchids? There are many reasons this can happen, and some of which are fairly easy to fix. In this article, gardening expert Melissa Strauss walks through the most common reasons flowers fall off orchids, and how to best address it! 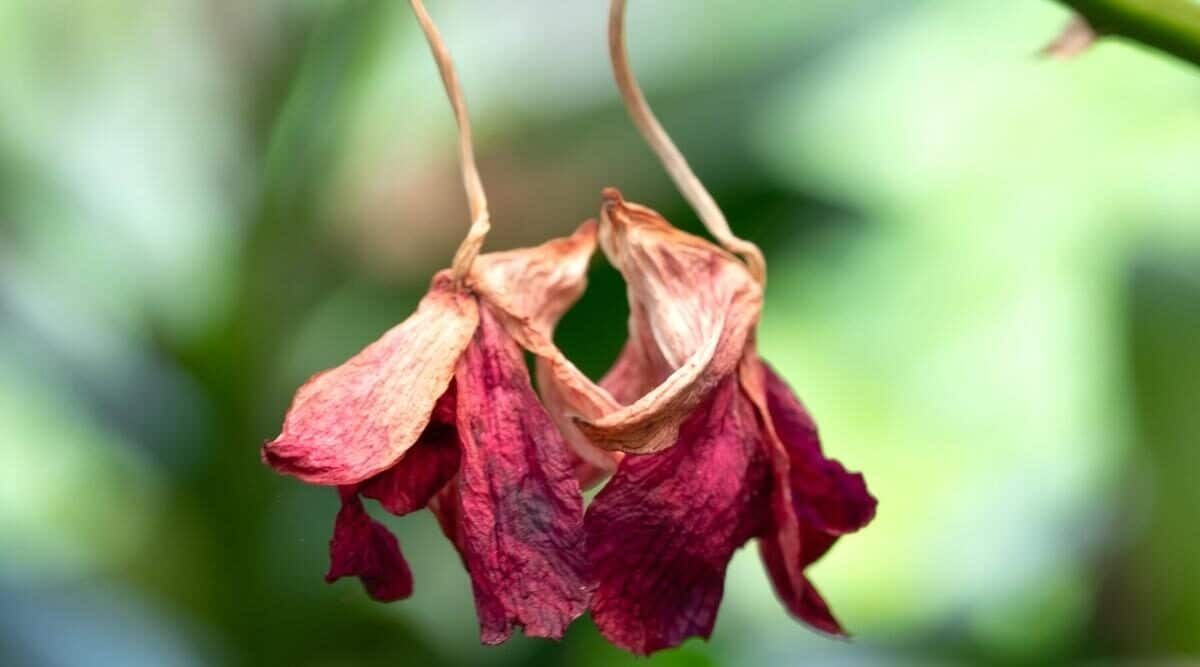 There are two words to explain how many gardening enthusiasts feel about orchids… beautiful, and terrifying. I myself have had a hand in massacring more than one phalaenopsis with too much water. Or was it too much sun? Oh right, it was both.

In the right climate, caring for orchids is as simple as tying them to a tree with an old pair of nylon stockings and letting nature take its course. My mother, who lives in zone 10b, swears by this trick. By the time the pantyhose fall apart from sun and rain, the orchid will have firmly rooted itself into the bark of the tree, and voila!

For those of us who deal with cold, winter weather, most orchids cannot survive outdoors year-round. Most orchids can be grown indoors, but proper care is far more complicated than the pantyhose trick. Finding just the right balance of water, light, humidity, and air circulation can be challenging, but necessary to maintaining the health of your orchid, and ensuring the greatest number and health of its blooms.

Here we will discuss 7 reasons why an orchid may be dropping its flowers, as well as how to correct the issue, and restore vigor to these enchanting plants.

The Blooms Are Spent

The main reason that an orchid would be dropping flowers is the most obvious one. While many orchids maintain their blooms for long periods, none of them bloom constantly.

Depending on the species and variety of orchid, flowers can last anywhere from 2 weeks to 2 months. The Vanilla Orchid’s blooms last for only one day, so blink and you could miss it.

When in bloom, most varieties need a bit of an increase in watering, fertilizing and light. The additional resources will be used to support those wonderful flowers we love so much and work so hard for. With most varieties blooming only once a year, you want to get as much time with those flowers as possible.

Sadly, all good things must come to an end. When an orchid’s blooms are spent, they will naturally wilt and fall off. Maintaining the right environment and meeting your plant’s needs will ensure the longest blooming time for the plant.

Most Orchids are epiphytic, meaning that they are air plants. They absorb water and nutrients through their exposed roots, which need a great deal of air circulation. Ideally, when potted, an orchid’s roots should dry completely between waterings.

When their roots are kept soggy, they become weak and prone to fungus and root rot. Rotting roots prevent the plant from absorbing adequate oxygen and nutrients, which will have a negative effect on the entire plant, including the flowers.

Yellowing leaves can be a sign of overwatering, as can prematurely dropping flowers because of limited nutrient absorption.

Gently remove your orchid from its container by tipping it on its side and loosening the potting medium. Use a clean, sharp tool to remove any roots that are brown and mushy. Clean the container, and then repot using lightly moistened, fresh potting mix. Return the orchid to its usual spot and avoid watering until the top 1”-2” of potting medium is completely dry.

Make sure that if the orchid rests on a dish of any kind, you drain off any excess water, as sitting in standing water will nearly always affect the health of the plant. Make sure that the container you are planting in allows for adequate airflow, which will also help prevent root rot.

Orchids can also drop flowers as a result of underwatering. Most varieties are native to very humid environments, where the roots have a plentiful supply of moisture in the air to keep their roots healthy and flexible.

If your orchid is looking droopy and dropping flowers, take a peek at the roots. Dry roots will have a grey, shriveled appearance rather than being smooth and flexible.

Water regularly and pay attention to the potting medium and any aerial roots. Don’t allow your potting medium to be completely dry for more than a day or two or the plant will begin to suffer from a lack of nutrients.

Since orchids need that good air circulation around their roots, so when potted correctly, they typically need good watering at least once per week, and more when in bloom.

Did you know that orchids can get sunburn just like people can? Some varieties like a fair amount of sunlight, while others live best in the shade, with only filtered light.

Knowing how much sunlight your orchid needs is important to the health of the plant, the retention of its leaves and flowers, and its ability to produce chlorophyll.

Too much sun will cause an orchid’s leaves to scorch, and once this happens, the leaves will start to rot and eventually fall off. There is no saving a leaf or flower once it has burned. Fewer leaves mean less photosynthesis, which means fewer flowers.

With very few exceptions, orchids need to be protected from harsh afternoon sun. Even those that like a lot of light should get the majority of their sunlight early in the day, with at least partial shade in the afternoon.

Familiarize yourself with the type of orchid, how much, and what kind of light it thrives in. Phalaenopsis orchids like mostly shade, and their leaves will scorch easily. Cattleya orchids like several hours of morning sun but need protection in the afternoon.

Once a leaf has burned, it will begin to rot, which can harm the entire plant. Prune off any rotting leaves and find a better spot for your plant where it is protected from direct afternoon sun.

While most orchids cannot tolerate the heat a lot of direct afternoon sunlight, they will not produce flowers if they are not getting enough light. An orchid that is growing lots of dark green leaves, but not producing flowers, usually needs more light.

In nature, most varieties grow into the bark on trees, which means that the light they get is filtered through the leaves of the tree for most of the afternoon when the sun is overhead. Consider this when finding a spot for your plant.

Pay attention to the color of the leaves, if they are darkening, move it to a sunnier spot, if they begin to turn yellow, less sun is what they need. The right amount of sun and water will keep your orchid blooming year after year.

Orchids grow in tropical climates. If you’ve ever visited a tropical climate, particularly in summer, you know that the air is pretty darn close to saturation, most of the time.

A dry orchid will lose its flowers faster because they are unable to absorb the nutrients they need to support the blooms. They have aerial roots which absorb much of the water they need form the air around them.

Most varieties need a minimum of 50% humidity to absorb the water and nutrients they need from the air. Some varieties, like vandas, really need closer to 80% humidity, so they need to be grown in greenhouses if you want to hold into those flowers.

Low humidity in orchids has a similar effect as it does in humans. The leaves, petals and roots will dry out and small cracks will form, which allows bacteria and fungus to affect the plant.

Bathroom windows are an ideal spot to keep orchids indoors. If you don’t have a bathroom with a sunny window, there are other ways to raise the humidity around your plants. A humidifier is a great tool, and misting helps as well.

Another trick is to place your orchid pot atop a tray of water with stones in it. The stones elevate the plant so that the roots don’t get waterlogged and rot.

With the exception of a few varieties which are terrestrial, nearly all orchids have aerial roots, which are fully exposed. If your humidity level is high enough, you may run into an issue with root rot, or overgrowth of fungus and bacteria.

All of these are factors that will affect the longevity of flowers, if not preventing blooms altogether. This will ultimately kill an orchid.

Potting orchids in well-ventilated containers is the primary way to ensure proper air flow. If your orchids are outdoors, the right container should be enough. Indoors or in a greenhouse, they may need a fan to increase the air movement.

Just a gentle flow is needed, if your orchids leaves are moving from the air, it’s probably too much and you risk drying out the roots.

Growing orchids can be intimidating with all of the factors involved in simulating their natural habitat. Maximum blooming time is dependent upon the overall health of the plant. With so many species, it can be difficult to strike the balance that each orchid needs to thrive. Learning about the specific growth habits of your species is vital to maintaining the right environment.

The most important factors to remember, when caring for orchids are their natural habitat and epiphytic nature. With the right amount of light, moisture, and air circulation, orchids will thrive for many years and produce plenty of breathtaking blooms.

9 Reasons The Leaves on Your Calathea Plant are Curling 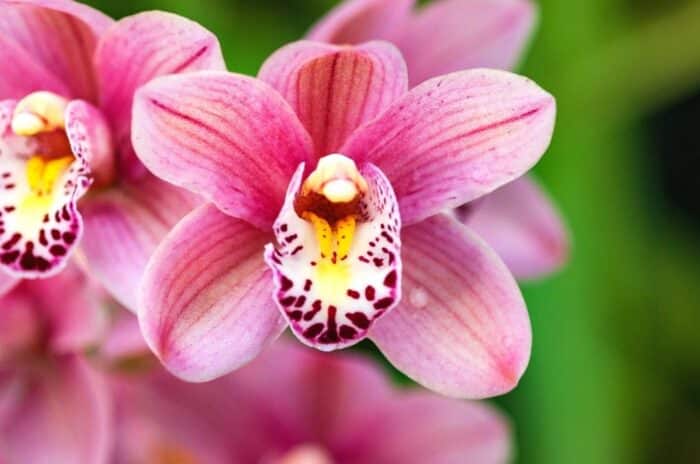 If your begonias are struggling this season, you've come to the right place! Begonias can have many common issues during their lifespan, so it's important to identify common problems early and remedy them as fast as possible. In this article, certified master gardener Laura Elsner looks at the most common issues that plague begonias, and how to fix them.

9 Reasons The Leaves on Your Calathea Plant are Curling

Leaf curl is a common problem amongst calathea plants. The key is figuring out why it's happening, and then correcting the problem. However, prevention is also the best defense with these popular houseplants. In this article, gardening expert and houseplant enthusiast Madison Moulton examines the primary reasons leaf curl could be happening to your calathea plants, and how to fix it.

Does your peace lily have brown tips and you aren't sure why? There are several reasons that this can happen. In this article, gardening expert and houseplant enthusiast Madison Moulton examines the most common reasons why peace lilies get brown tips, how to fix them and how to prevent it from happening in the first place!

Fiddle leaf figs are popular houseplants, but they can also be a bit difficult to care for. One common problem they have is curling leaves. In this article, gardening expert and houseplant enthusiast Madison Moulton walks through 11 reasons why your fiddle leaf fig may have curling leaves, and how to fix it!

Curious what kind of problems hostas can carry with them once they are planted? Hostas can run into several issues, but many of them are preventable or treatable. In this article, certified master gardener Laura Elsner walks through the most common problems with hosta plants and how to prevent or fix them.