Are you trying to decide between French or English Lavender for your garden? Not sure what the difference is between them? In this article, organic gardening expert and former organic lavender farmer Logan Hailey looks at the differences between them, and which climates they perform best in. 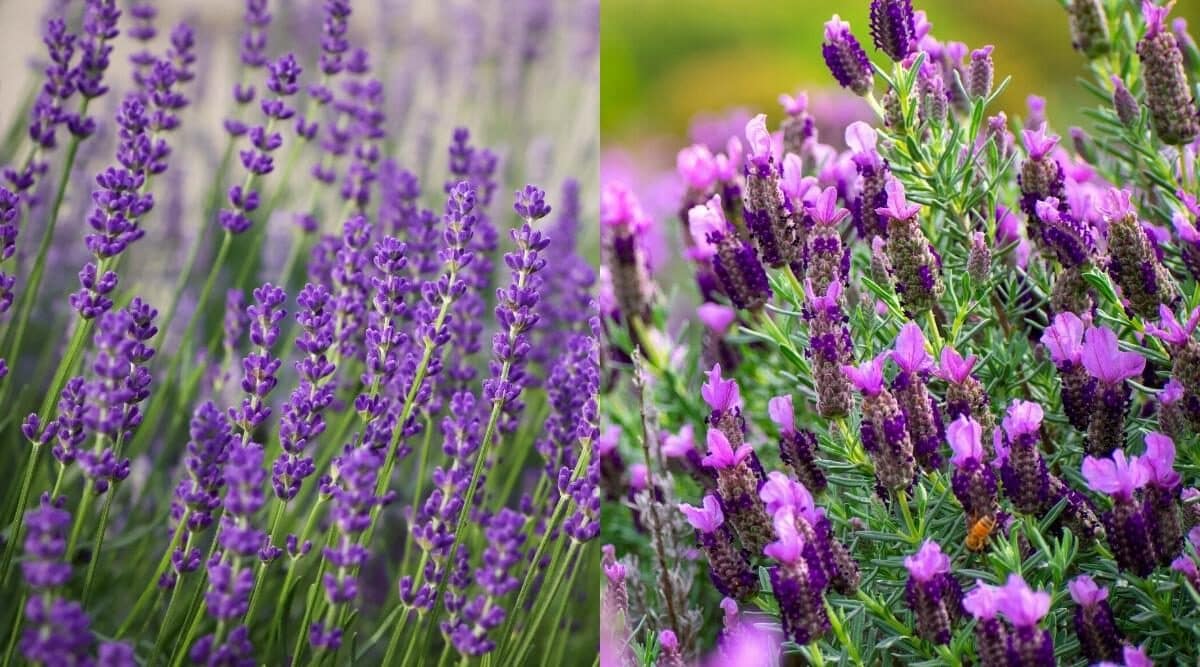 If you dream of a sea of aromatic purple flowers in your garden, lavender is among the most low-maintenance herbs you can grow. But when it’s time to choose the right type of lavender, it can be hard to differentiate between the French and English lavender types.

One is better for a long bloom window while the other is more cold hardy. There are also differences in the fragrance, flower shape, and shrub size.

Let’s dig into everything you need to know about French versus English lavender.

English varieties are more fragrant and suitable for culinary and herbal uses, but French varieties have a longer bloom time that will decorate your garden nearly all season long. Both English and French types are low-maintenance Mediterranean shrubs that prefer well-drained, nutrient-poor soil and drought-like conditions.

Many of us imagine rolling fields of blooming lavender in the French countryside, but some of the most popular perfume lavender farms in the world actually grow English varieties. These two types of lavender are easily confused because they come from similar areas of the world and look similar at a distance.

English lavender (Lavandula angustifolia) is the most common “true” lavender that you see everywhere. These vibrant shrubs are grown in home gardens and on commercial farms around the world. They are the parents of newer Lavandin hybrids (Lavandula x intermedia), which are known for their extremely high essential oil content and fragrance.

This hybrid species hosts some of the most fragrant and world-renowned varieties like ‘Provence’ and ‘Grosso’. These are more accurately called English lavandin hybrids because of their English genetics. They don’t have the toothed “dentata” leaves of true French lavender.

True French lavender (Lavandula dentata) is a popular landscape flower known for its toothed (lobed) leaves and fluffy flower spikes. Like Spanish varieties, French types often have “rabbit’s ear” bracts at the top of the flowers.

These shrubs are less fragrant but bloom more continuously than English cultivars. However, French lavender is not the choice for scented, herbal, or culinary uses.

To make things more confusing, some products are often sold under the “French lavender” label to identify that they are sourced from the French countryside. These highly fragrant perfumes and essential oils are actually sourced from commercial farms that usually grow the English lavender hybrid Lavandin known as ‘Provence’.

Gardeners in cold climates are confined primarily to English varieties. Fortunately, there are hundreds of them available. English lavender is extremely hardy and can withstand negative temperatures in its dormant state. These varieties are hardy in zones 4 through 8 and don’t particularly enjoy prolonged hot weather.

French lavender, on the other hand, is a warm-weather perennial. It can only handle temperatures down to single digits and really prefers the Mediterranean-style climate of its native range. French varieties are best for growing zones 8 through 11, though some cultivars can handle zone 7.

Both French and English lavender are extremely drought hardy varieties and don’t mind poor soils. In fact, they love a gravelly or sandy soil texture that allows water to flow through quickly. These herbs only need additional irrigation during their initial months of root establishment.

Afterwards, only sparse supplemental water is needed during the driest periods. Lavender growing in the east and northwest often doesn’t need to be watered at all one it is established.

French lavenders are slightly larger shrubs than their English counterparts. French types average 30-36” tall and up to 40” wide, depending on your pruning regime. English lavender reaches about 20-24” tall and 24-36” wide. Both types need a spacing of at least 2-3 feet between plants and benefit from twice-annual pruning.

Herbal or culinary gardeners who want extra fragrant lavender should opt for English varieties. These types have the strongest aromas and highest essential oil content.

They have been used for centuries to produce perfumes, candles, bug sprays, and floral sachets. The scent could be described as having notes of sweetness, musk, rosemary, bergamot, sage, and geranium.

French lavender still has some fragrance, but it is more subtle. The flowers are lightly camphorous and more earthy than the ultra-floral English flowers. French lavender blooms are rarely used commercially for scented products. Instead, they are most popular for their ornamental landscape use.

When it comes to the amount of time spent flowering, French lavender beats its English competitor. French varieties bloom practically non-stop from spring through fall in zones 7-10. Rather than putting up several different flushes of flowers, French lavender tends to always have flowers on the bush.

English lavenders usually have two distinct bloom times— once in the late spring to early summer and again in the late summer through fall. Most gardeners prune the bush after the first flowers begin to fade so they can encourage another flush after the heat of summer passes. These bushes won’t hold onto their blossoms through the scorching weather the way that French types do.

If you live in a warm climate and want the most continuous floral display possible, French lavender is calling your name!

English lavender has the classic “true” flower shape. The slender spikes are made up of a whorl of tiny buds and flowers that most people associate with the traditional aesthetic. English lavender has elegant long stems and gray or green foliage with a shape that is reminiscent of rosemary leaves.

On the other hand, French lavender flowers are noticeably “fluffier” and denser than English spikes. They often have bracts above the flowers that make them look similar to “rabbit’s ear” Spanish types.

French lavender leaves are noticeably “toothed”, hence their Latin name Lavandula dentata. The leaves are lobed along the entire leaf margin and have a striking appearance that gives it a more intriguing look during the dormant (non-flowering) stage.

Technically, all lavenders are edible. You can safely eat the lavender planted in your garden regardless of the variety. However, some varieties taste better than others.

English lavender is the primary choice for its culinary use because it doesn’t have a high camphor (bitter) content, which means it won’t make your food taste like soap. The blossoms are delightfully sweet and floral, while the leaves are pungent and subtly earthy, minty, or smoky.

The leaves of French varieties have a more rosemary-like scent that is often used in marinades, baked breads, and herbes de provence. They can be more bitter, so be sure to taste test before you go all-in.

All in all, French lavender is best for landscaping while English varieties are better for seasonings and floral crafts.

If you’re having trouble deciding between French and English lavender, the weather might make the decision for you. These two types of lavender have distinct cold and heat tolerances. Cold northern gardeners will have to opt for English types unless they plan to move French varieties indoors during the winter. Warm southern gardeners will do best with French lavender because English types don’t handle heat and humidity very well.

15 Plants That Will Attract Dragonflies to Your Garden

23 Perennial Plants For Gardeners on a Budget

When Should You Harvest Lavender For The Best Results?

Do you have some lavender in your garden but aren't quite sure when to harvest it? Lavender can be a tricky herb to time perfectly when it comes to harvesting. In this article, organic gardening expert and former organic lavender farmer, Logan Hailey takes you through the perfect timeline to harvest your lavender this season. 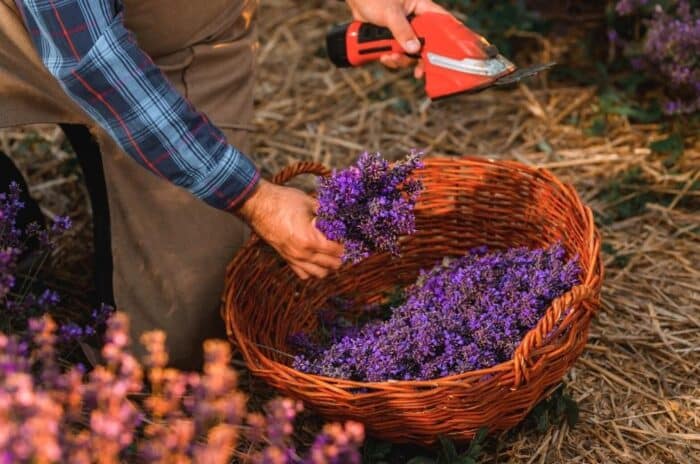 Are you looking for some plants that can grow in an indoor or outdoor pond? Finding the right types of floating plants for pond gardens can be a bit of a challenge! Luckily, there are many different options you can choose from. In this article, we take a look at our favorite plants that can thrive in outdoor or indoor ponds!

Are you thinking of adding some lavender to your indoor garden? Perhaps you've decided to pull a few of your lavender plants inside for the winter? In this article, organic gardening expert and former organic lavender farmer Logan Hailey gives her top tips for growing lavender indoors!

15 Plants That Will Attract Dragonflies to Your Garden

23 Perennial Plants For Gardeners on a Budget

Are you looking to start a perennial garden, but want to stay within a certain budget? There are many different perennial plants that you can grow, without breaking the bank. In this article, gardening expert Liessa Bowen lists out her favorite budget-friendly perennials, with names and pictures of each!

Are you looking for some fast growing ground cover to fill in the sloping space in your garden? If you have a sloping area to fill in, you likely know that not everything grows well on the side of a hill or steep slope. In this article, we take a look at our favorite ground cover plants that will fill in the harsh sloping areas of your garden, with names and pictures of each!