How and When To Deadhead Dahlia Flowers in Your Garden

Should you deadhead your dahlias? And if you do, when is the best time during the season to do it? These are questions many gardeners have as they try to get the most out of their dahlia blooms. In this article, certified master gardener Liz Jaros walks through how to deadhead dahlias, and the best time of season to start doing it. 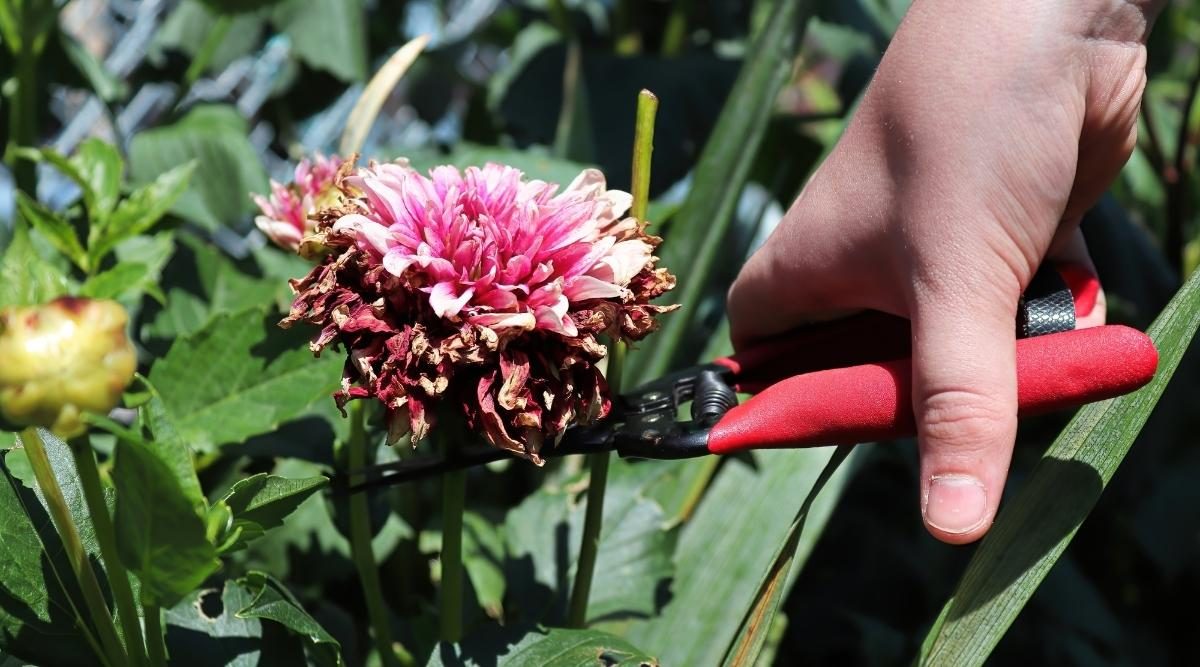 So you’ve caught dahlia fever and your backyard is buzzing with beautiful blooms. It’s no wonder you were drawn to them. So many colors, shapes, and sizes. Such a long growing season. Such diversity in form and style. Miniature, mega-sized and everywhere in between, your dahlias are standing tall and running the show. And you want to make sure it stays that way.

The good news is, you control their destiny. The power to prolong the thrill is in your hands and in your gardener’s tool bucket. With a little diligence and a lot of flitting around the garden, you can make sure your dahlias keep razzling and dazzling until the bitter end.

In this article, we will walk through every step you’ll need to take if you plan to deadhead your dahlias. We will explain a bit about the plant itself, why deadheading is important with them, and teach you each step you’ll take for better blooms this growing season. Let’s jump in!

Native to the high plains of Mexico and South America, dahlias were once prized for their more utilitarian purposes. Their tuberous roots made them useful as water carriers, and they could also be eaten or used as medicine.

With the original species being gangly and tree-like in form, they were not particularly pleasing to the eye, but that all changed when European gardeners started playing around with their seed.

Through selection and hybridization, botanists soon discovered this genus had a very bright future in blooms. And the modern day dahlia (dahlia spp.) was born. Ranging in height from 10 inches to 7 feet and featuring bloom sizes between 2 inches and 1 foot, dahlias became wildly popular all over the world and quickly took root in our hearts.

Grown best in loose, well-aerated soil that’s rich with organic material, dahlias rise uptake over the garden at a time when early summer bloomers are typically fading. If properly cared for and evenly watered, they’ll keep going until the first freeze in cooler climates, or about four months in warmer regions.

Considered perennial in zones 8 and above, dahlias are treated as annuals in zones 3-7. See our recommendations for zone 5 here. But tubers can be dug up, overwintered, and divided each season to produce multiple clones year after year, so they really do deliver a lot of bang for the buck.

Quite simply, deadheading is the process of removing dead or fading blooms from a live plant. Without delving too much into the nitty-gritty of pollination and reproduction, a plant’s sole purpose is to complete its reproductive cycle and make more plants. Bright, colorful flowers attract pollinators, which fertilize the ovum, which produces the seed that will then spread and grow.

Since dying flower heads are an indication that seed production has begun, a flower’s growing system will then divert its focus from creating showy blooms to nurturing its roots and foliage. When we remove spent or fading flowers from a healthy plant, we are actually tricking the plant into thinking it has to send up more blooms.

So if you thought deadheading your flowers was simply a means of giving the garden a tidier vibe, think again. It will encourage more blooms, prolong the growing season, stop the spread of unwanted seeds, and keep your bees buzzing happily into the fall. It’s also more than a little addictive.

How to Deadhead Dahlias

By far the trickiest part of deadheading dahlias is knowing the difference between a spent bloom and a young bud. If there are petals hanging on, or if you’ve been obsessively monitoring your blooms, you’ll know which ones are ready to be cut back.

But if you find yourself standing over a dahlia with pruning shears in hand, wondering if you’re about to lop off a friend or a foe, you may want to zoom in for a closer look. A spent dahlia bloom will appear pointed or conical in form. A fresh bud will appear rounded and maybe a bit more compact. Knowing the difference will save you a lot of newbie deadheader heartache.

Since dahlias are vulnerable to fungal conditions and insects, blooms should be tossed into the composter. Do not leave them on the ground, as is suggested for some other flower varieties.

When Not to Deadhead Dahlias

Other than keeping things tidy, don’t bother deadheading late in the season. Your dahlias will be shutting down soon and there’s really no point.

You may also want to skip the process if you’d like to harvest your dahlias’ seeds or give them a chance to spread. Since their seeds will not be true to type and you’ll be playing genetic roulette, you’re more likely to get a dud than a show-stopping specimen. But you can still do it for kicks and see what happens.

Another possible reason you might opt out of deadheading is to provide a food source for overwintering birds and backyard critters. They will appreciate this gesture during the long winter months for sure.

Is pinching dahlias the same as deadheading?

No. Pinching involves removing a dahlia’s primary growing tip to encourage side branching. It is done early in the season before blooms have begun. Deadheading is the act of removing spent blooms to encourage new flowers, and it is done later in the season after flower production has begun.

Will it hurt my dahlia if I don’t deadhead?

Not at all. Deadheading is purely an aesthetic maintenance task and has no impact on overall plant health. Should you choose not to deadhead or simply get too busy for such things, your dahlias may not look as lovely, but they will be just fine.

What if I accidentally cut off my dahlias’ buds?

No worries. You may have a week or so with little to no flowering, but your dahlias’ roots will send up new blooms anyway. You’ll just have to be a little patient.

When should I deadhead if I want to save my dahlia heads?

Look for signs of pollen production, typically a dusting of yellow on the petals. Other indications that a flower head is about to go to seed include fading petal color and brownish tips.

Is it okay to deadhead dahlias after a heavy rain?

Yes, this is actually a good time to deadhead. Decaying flower heads often hold a lot of water and get very heavy. Removing fading blooms aggressively can help prevent stem damage and breakage.

Should I deadhead dahlias during a drought?

Yes, deadheading during times of stress will actually help your plants conserve energy and retain their moisture.

I find deadheading to be a garden task that sounds like work but is actually therapy. Sometimes I find myself aggressively walking through dahlia beds with my shears. I sometimes hope that they will sag or drop petals. Sometimes I spot a fading flower head from my kitchen or on a drive past a client’s house, and I’m compelled to hop out and give it a snip.

Once you realize performing this simple weekly maintenance routine not only cleans up your dahlias’ appearance but also sets the stage for next week’s show, deadheading will likely become both a habit and an obsession. Make this simple, but garden-altering task a part of your dahlia know-how and you’ll enjoy their eccentric beauty long into the fall.

31 Colorful Perennial Flowers For a Burst of Color 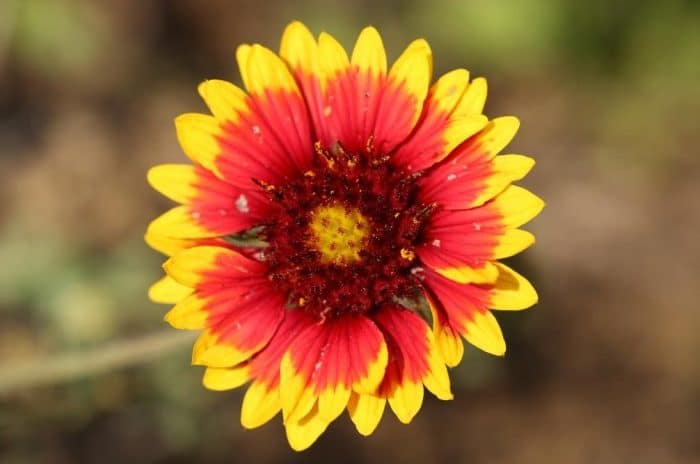 31 Colorful Perennial Flowers For a Burst of Color

Are you thinking of adding some flowers to your garden but aren't sure which ones to add this season? The chrysanthemum is one of the most popular flowers in the entire world. In this article, flower expert and farm owner Taylor Sievers walks through how to get the best results when you plant, grow, and care for chrysanthemums in your garden.

Thinking of adding some color to your garden, and have settled on some bright orange? Finding the right balance of colors in any flower garden is critical, especially if you want these flowers to come back each year. In this article, we look at our favorite orange perennial flowers that will help bring a bit of energy to your flower garden this season, and many more after it.

Dahlias are some of the most beautiful perennial flowers you can add to your garden. But which types of dahlias should you add this season? While the flower lover in me says add "all of them," there simply just isn't enough room to do that. There are thousands of dahlia cultivars you can plant, so we've selected some of our favorites to show you how beautiful these flowers can be!