Why Are My Cucumbers Flowering So Early This Season?

Are your garden cucumbers flowering early this season? This can happen for a few reasons, most of which are no need to worry about. In this article, gardening expert and former organic farmer Sarah Hyde examines why cucumbers flower early, and what to do about it. 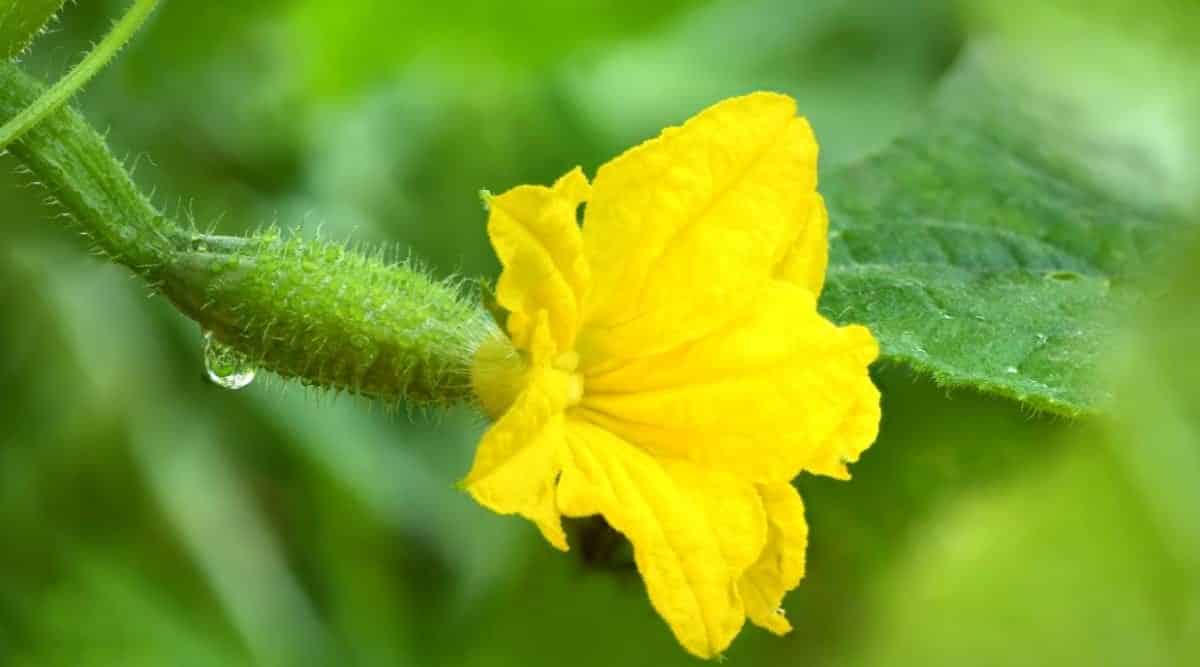 Cucumbers lend a satisfying, cool crunch to hot summer days and are ubiquitous in salads in worldwide cuisines. Cucumbers’ refreshing flavor has been enjoyed by humans for a long time since they were first cultivated.

The cucumber’s ability to produce fruit with only one plant may have helped them be successful garden vegetable for quite some time in home gardens. Their self-reliance was probably noticed and encouraged by ancient gardeners who cultivated early versions of the fruit. Cucumbers have a fascinating flowering and pollination system, which can also bring up many questions.

Gardeners today may notice an abundance of cucumbers flowering too early in the plant’s development. These blossoms may not bear fruit and then eventually wither away. So, why does it happen? This article will answer this question and go in-depth about how cucumbers grow, are pollinated, and form fruit.

There are a few reasons a cucumber could bloom earlier than desired. Cucumber (Cucumis sativus) plants have both male and female blossoms on each plant. Depending on variety and weather conditions, you may see male blossoms appear up to a week before female blossoms. Male blossoms do not produce fruit, and they will simply wither away. This is natural and common, and not cause for concern.

Cold weather, lack of water, or disease can be a few reasons for the early blooms. The flowers may also be a reaction to stress. Unfortunately, early blooms have less chance for success since there may be less insect activity in cold, early spring weather.

However, as the weather warms, growing conditions improve, and when insects arrive, most cucumbers will continue to produce new male and female blossoms at the right time. Keep your insecticide use at zero or to a minimum to avoid harming pollinators.

The blooms will be pollinated via insects and eventually will start to form at the base of the female flowers.

Cucumbers thrive in the hot, humid days of summer. Seeds will not germinate in cold spring soils, and early planted transplants will grow very slowly, if at all, on cool spring days. Flowers that appear too early in the plant’s growth cycle may be a panic-induced move to reproduce when conditions are tough.

Since they are not frost-tolerant at all, any spring frost will kill them entirely. Wait to plant them after the last spring frost has passed. If you are starting your own transplants, resist the temptation to start them too early, as cucurbits do not transplant well after they become rootbound.

Cold weather also reduces insect activity, which is a problem for cucumbers since they are dependent on insects for pollination. Young transplants or seeds in the soil will grow rapidly during hot summer days, so do not worry if you get them planted later than the rest of your garden. Their blossoms will be opening when the summer insects arrive en masse.

If your climate is unrelentingly hot there are some alternatives you can plant. Armenian Cucumbers (Cucumis melo) can be a good choice. Armenian cucumbers (aka snake melons) are not true cucumbers, but a close relative to melons that look, taste, and grow like cucumbers.

They are excellent for hot climates since they tend not to get bitter even when the days are hot and the fruits get big. Armenian cucumbers also have a beautiful ribbed pattern on their skin, which makes for attractive slices on a vegetable platter.

Cucumbers need high fertility and plenty of regular water to grow well. Incorporate a balanced cucumber-friendly fertilizer and/or rich compost prior to planting. Mulch the soil to help maintain soil moisture and regulate the temperatures on the hottest days.

Drought or heat stress can result in plants that are more susceptible to pests and disease, and unfortunately, bitter fruits. If this occurs, harvest the bitter fruits, (compost them) and keep a closer eye on not letting the plants get water-stressed while the next batch of fruits is forming.

Planting them where they get mostly shade or partial shade from the hottest part of the afternoon heat can also help reduce the chances of having bitter fruits. Too much shade can result in fewer flowers, and thus less fruit. Make sure they get 6-8 hours of sunlight daily.

Cucumbers need to be harvested regularly to keep producing through the summer. Check the plants daily and look thoroughly and carefully under the leaves for prime-size cucumbers.  Discard any overripe fruits that are dull-skinned, yellow, or white, since they will be bitter and very seedy.

Cucumbers grow as a vine, with grasping tendrils that will attach to anything upright and slender. This growth habit is a distinctive trait seen in almost all other cucurbit family plants.

Cucumbers appreciate growing on a trellis, though they will be just as happy sprawling unsupported in your garden. If you do not have time to set up a support and the cucumbers will sprawl, use mulch on the soil to help keep the fruits clean and free of soil pathogens

If you choose to trellis, prior to planting is the easiest time to set it up. Trellising makes harvesting easier, since the cucumbers are much easier to spot, and they are free of dirt. Trellising also helps the fruits grow straighter, simply by the force of gravity, if that is important to your harvest.

One downside of trellising is it requires extra time to install and train the cucumbers to grow up the trellis. Trellised plants can also be exposed to the hot sun and are more susceptible to sun scald.

About Pollination and Fruit Set

Cucumbers require a happy balance in order to produce flowers and then fruit. The climate, variety, and pollinators can all affect the blooming of cucumber flowers. If you are trying to figure out why your cucumbers are flowering too early, it is a good idea to educate yourself on the many factors that contribute to flowering in the first place.

Cucumbers are known to produce male blossoms and no female blossoms early in the season when the plant is still small. Do not panic if you do not see fruit right away after flowering. It may be too early in the spring to have a reliable crew of pollinators, and low pollination could be one reason there isn’t any fruit.

Most self-pollinating plants cannot physically pollinate themselves, rather, insects or wind are the main pollination vectors. Cucumber is dependent on pollinators for pollen transfer between flowers. Honeybees and flies are two major pollinators, and butterflies and squash bees help too.

After pollination occurs, the stem below the blossoms on the female fruits will start to form a baby cucumber. It will be ready to pick in a few days depending on variety, ideal harvest size, temperature, soil fertility, and amount of watering.

The male blossoms will wither away after they have matured. The plant will continue to produce more male and female blossoms throughout the season.

Better pollination and more fruit occur on cucumbers that are grown with others of the same variety nearby, rather than one single cucumber plant in a garden. More plants mean more blossoms to attract pollinators, which leads to more exchange of pollen.

Pollinators appreciate lush gardens full of blossoms the way humans appreciate “one-stop shopping” since it conserves time and energy to gather food.  If you only want one plant, consider planting flowers in your garden to attract more pollinators.

Interestingly, new varieties of cucumbers have been bred to be gynoecious, where they only produce female flowers. Seed packets have a few monoecious cucumbers mixed in to provide male blossoms for pollination.

Another new breeding development is parthenocarpic cucumbers, which are bred to be seedless and require no pollination to set fruit. However, they need to be grown in a protected area where insect pollinators are excluded. Parthenocarpic varieties are best suited for commercial growers, or highly attentive, invested gardeners that have a specialized greenhouse

Cucumbers are an easy-to-grow garden crop that thrives in the hot and humid days of summer and provides a cool crunch in salads. Though cucumbers are easy to grow, sometimes they bloom early and do not set fruit. Do not despair, this article has given you many possible reasons for early blooms.

If your first batch of cucumbers did not thrive, in most climates as late as July there should be time to reseed and have a harvest before fall frost.

Why You Have White Powder or Spots on Your Cucumber Leaves

Ants on Cucumbers: Why it Happens & Prevention

10 Reasons To Grow Nasturtiums With Vegetables 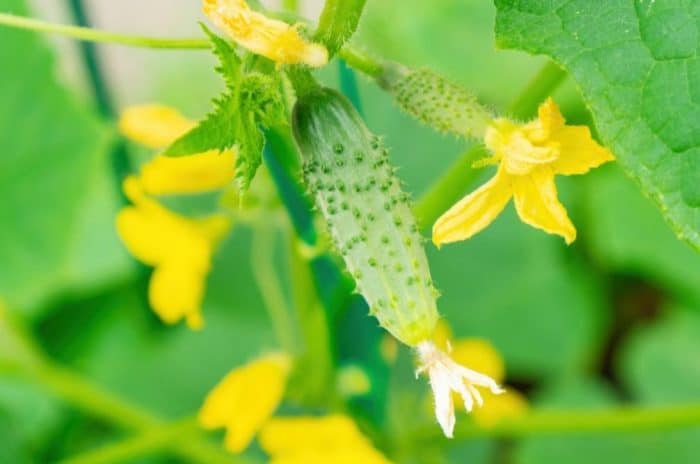 Do you have a small garden space that you aren't quite sure how to fully utilize for your garden grown vegetables? There are many different ways to make use of smaller growing spaces. In this article, organic gardening expert Logan Hailey walks through her top tips for maximizing space in smaller garden areas.

Why You Have White Powder or Spots on Your Cucumber Leaves

Ants on Cucumbers: Why it Happens & Prevention

Are there ants on your garden cucumbers? They could be enjoying your hard grown veggies for a number of different reasons. In this article, gardening expert and former organic farmer Sarah Hyde examines why ants can be attracted to cucumbers, what to do if you notice them, and how to prevent them from coming around your cucumbers in the first place!

10 Reasons To Grow Nasturtiums With Vegetables

Are you considering growing nasturtiums with your vegetables this season, but aren't sure if you should? Not only can you grow them together, but there's actually benefits to doing so! In this article, suburban homesteader and gardening expert Merideth Cohrs walks through 11 reasons to plant vegetables and nasturtiums together this season.

Are you thinking of starting a garden, but doing it the old fashioned way with no pesticides? Organic Gardening can be an extremely fun experience, but there are some specific steps you'll want to take before getting started. In this article, organic gardening expert Logan Hailey walks through what you can expect.