When Does Clematis Bloom? Will it Bloom All Summer?

Did you plant flowering Clematis plants last season, but aren't quite sure when to expect them to bloom? There are a few factors that go into Clematis bloom times. In this article, gardening expert Liessa Bowen looks at when you can expect your Clematis to bloom this season, and beyond. 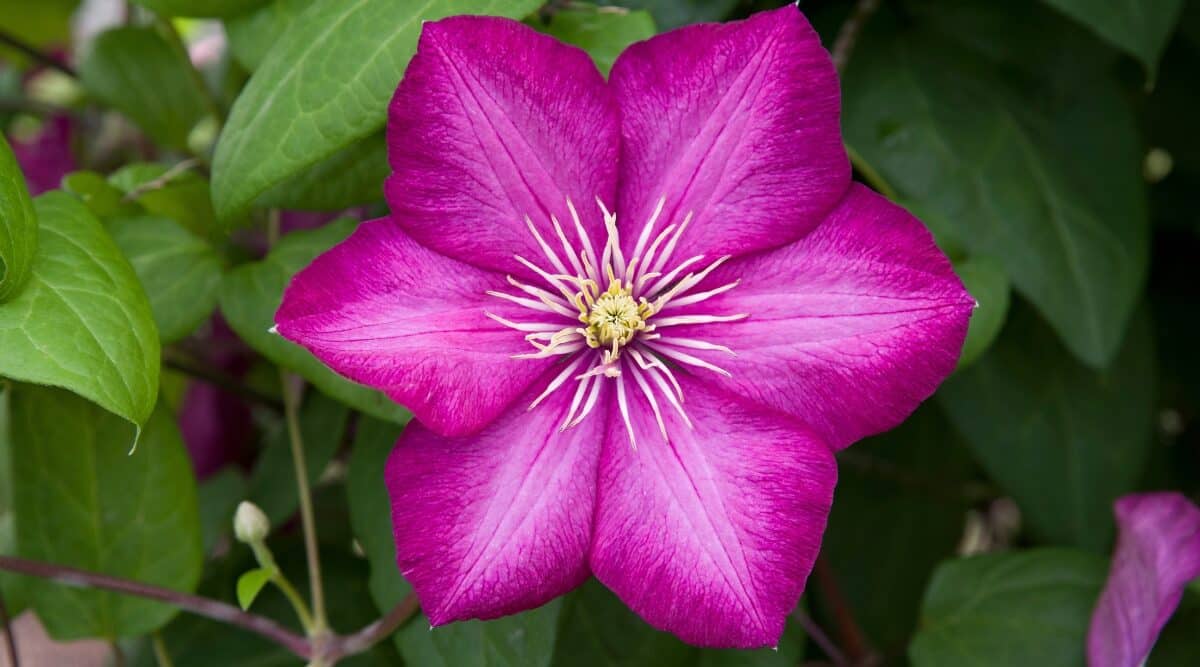 At peak bloom, a healthy, well-established Clematis vine may be covered with spectacularly large and colorful flowers. These hardy vines with their showy flowers have earned a place as a gardening favorite. Flowers come in an array of sizes, shapes, and colors. Most varieties are long-lived, deciduous perennial vines, but a few are evergreen.

Flower colors range from white to various shades of pink and purple, including a multitude of bicolored blooms. Flower sizes are also highly varied, from small 1-inch blooms to giant blooms that reach 10 inches across.

If you are already growing Clematis, or are considering adding one to your landscape, you may be wondering when to expect to see your own spectacular flower show. There are several factors that affect when these plants flower, primarily which plant variety you have and your climate zone.

Clematis plants will typically not flower until at least their second year. There are over 250 species, and they are adapted to an array of different hardiness zones. Depending on the variety of plant, its growing conditions, and the local climate, Clematis blooms can appear anywhere from late winter through mid fall. Some varieties have one early season flower flush, while others have a single mid-season bloom time. Other varieties that bloom first in spring and again in summer.

There are over 250 species of Clematis, with numerous cultivars and hybrids available. All these varieties means you have a lot of options to choose from! Not only are there a vast array of flower shapes, sizes, and colors, there are also plants that will bloom for just about any part of the growing season.

Some varieties start blooming in late winter, while others wait until the summer months and may continue blooming into fall. If you want to maximize the amount of time you have Clematis flowers blooming in your garden, buy multiple varieties that will bloom at different times throughout the year.

If you are buying a newly potted plant, chances are it’s already 1 to 2 years old. Many varieties won’t start blooming until they are at least 2 years old, so you won’t have to wait as long as if you try growing your own from seed or from cuttings. Once they are old enough to bloom, they should bloom annually for many years to come.

The most important factor in determining when your Clematis will bloom each year is to know which flowering-group it belongs to. Clematis are sorted into three main “pruning groups,” based on their flowering style and timing.

If you don’t already know your plant’s pruning group, you can figure it out by observing it for a year or two. Take note of when it blooms and whether the flowers appear on only the new year’s growth, only on old wood, or on both.

The early spring bloomers, as the name implies, bloom early in the season. Depending on the species you have, they may start blooming as early as late winter or early spring. This group of plants tends to do best in warmer climates where the early spring temperatures are mild and allow for a jump start on plant growth.

Plants in Group 1 produce flower buds only on old wood from last year’s vine, so they don’t require much pruning other than basic maintenance and upkeep. Simply let them grow, keep the plants healthy, and flowers will appear each year along the previous years’ established vines.

Popular varieties from flowering group one are ‘Sparky Purple Clematis’ and ‘Mayleen’ Clematis.

The repeat bloomers typically bloom twice during each growing season. The first flush of colorful flowers appears in spring and tends to be the more prolific bloom. There will be a second, often lesser blooming period during the summer months. There are other varieties in this group that bloom continuously throughout the summer and into fall.

Group 2 varieties produce flower buds on both new and old wood. In order to maximize annual flowering output, lightly prune your vines in late winter or early in the spring before the first blooms appear.

If you either deadhead immediately after blooming or do a heavier pruning after the first flower flush, this may encourage fresh growth and continued blooming. Plants in this group tend to do well in moderate to warm climates.

Popular varieties from this group include ‘Picardy’ and ‘Candida’ for gardeners that prefer a white blooming vine.

Clematis in group 3 typically bloom from summer through fall. They may begin blooming in late spring, depending on the climate zone and plant variety. Many varieties in this group do well in cooler and moderate climates. Some varieties are hardy to zone 3, so if you live in a colder climate zone, choose the cold-hardy varieties from this group.

Group 3 varieties produce flower buds only on new wood. This means they require heavy pruning to encourage new growth and to produce flowers. Do your annual pruning of these plants in the winter before growth begins in the spring.

You can prune these varieties quite low. However, make sure to leave some of the old stem wood to encourage new shoots to grow in the spring. If you don’t prune these plants, you will find that the lower parts of the plant remain leafy. Flowers will only appear at the tops of the vine, which may be quite high, depending on the size.

The most popular variety from blooming group 3 is likely Jackman’s Clematis, also known as ‘Clematis Jackmanii’. This late-flowering variety is well known for its stunning purple blossoms.

Do I have to prune my Clematis?

No, there is no requirement that you must prune your Clematis. The plant will grow just fine without pruning. Proper pruning that aligns with your plant’s blooming style will, however, encourage more blooms each year.

For example, for plant varieties that produce flowers on new growth, pruning old wood encourages vine growth which will lead to more blooms on the newly grown vine. Pruning also helps keep your plant from becoming a tangled mass, and keeps it from becoming too top heavy.

What if I’ve never pruned my Clematis?

If your plant has never been pruned, it’s probably starting to look rather messy and tangled. Sometime in late winter, before new growth starts, you can do a heavy pruning of your plant to remove the tangled overgrowth, which will likely be thin and weak anyway.

Don’t worry about doing a “bad” pruning job, the goal is to help the plant get a fresh start by leaving some healthy main stems. New growth will soon sprout from these main stems and your vine will look fresh and renewed, with plenty of time for flowering.

Which variety of Clematis blooms the most?

There are many favorites in the gardening world, but some of the varieties that have a big following are ‘Picardy‘ and ‘Jackmanii’. Both of these varieties have stunning purple blooms, and will show them off eagerly during their blooming season.

No matter where you live, there’s probably a Clematis plant that would do well in your landscape. If you have a sunny spot where you can keep the soil rich, moist, and well-fertilized, install a trellis and start planting. Be sure to choose one that will grow well in your hardiness zone.

Give your plant a little time to become established, check on it regularly to be sure it’s doing okay, prune as needed, and enjoy a spectacular seasonal flower display. To extend your Clematis’ blooming season, plant multiple varieties so they each can bloom with their own unique timing. If you choose an assortment of different plants, it’s possible to have continuous blooms from spring through fall!

Is Flowering Clematis Considered a Vine or a Shrub?

7 Care Tips For Overwintering Your Clematis This Season

Are you preparing your flowering clematis plant for winter this season, but aren't sure where to start? These perennial vines are a garden mainstay, but can be susceptible to frost. In this article, gardening expert Liessa Bowen shares her top tips for overwintering your clematis this season. 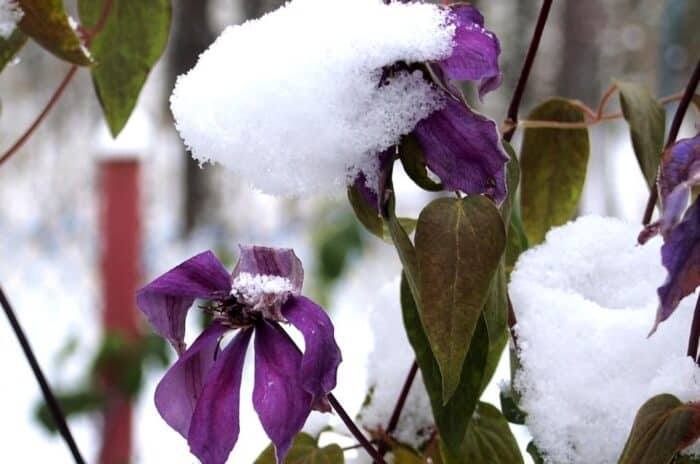 Is Flowering Clematis Considered a Vine or a Shrub?

Thinking of adding some vines to your garden this season, but need to make sure they are suitable for drier climates? There are quite a few vines that are surprisingly drought tolerant and can grow in even the most arid environments. In this article, we look at our favorite drought tolerant climbing vines, with names and pictures of each!

Thinking of planting some morning glories to your garden, but aren't sure which type to choose? There are a number of different morning glory varieties that grow quite quickly in most gardens. In this article, we take a look at our favorite types of morning glory vines to plant in your home garden.

Looking for the perfect vine to climb a trellis or pergola in your garden? Not all vines are great climbers, so finding the right vine matters when picking a climbing vine. Climbers come in all shapes and colors, so there's plenty to pick from. In this article, we look at our favorite vines that will climb trellises, pergolas, or walls in your garden.