Did you end up with more cucumber than you thought you would after your most recent harvest? If so, you may be thinking of freezing it in order to keep it good for as long as possible. But is that the best idea, and how long does it keep after being frozen? In this article, we examine if you should freeze cucumber, and how long it will stay good for if you do. 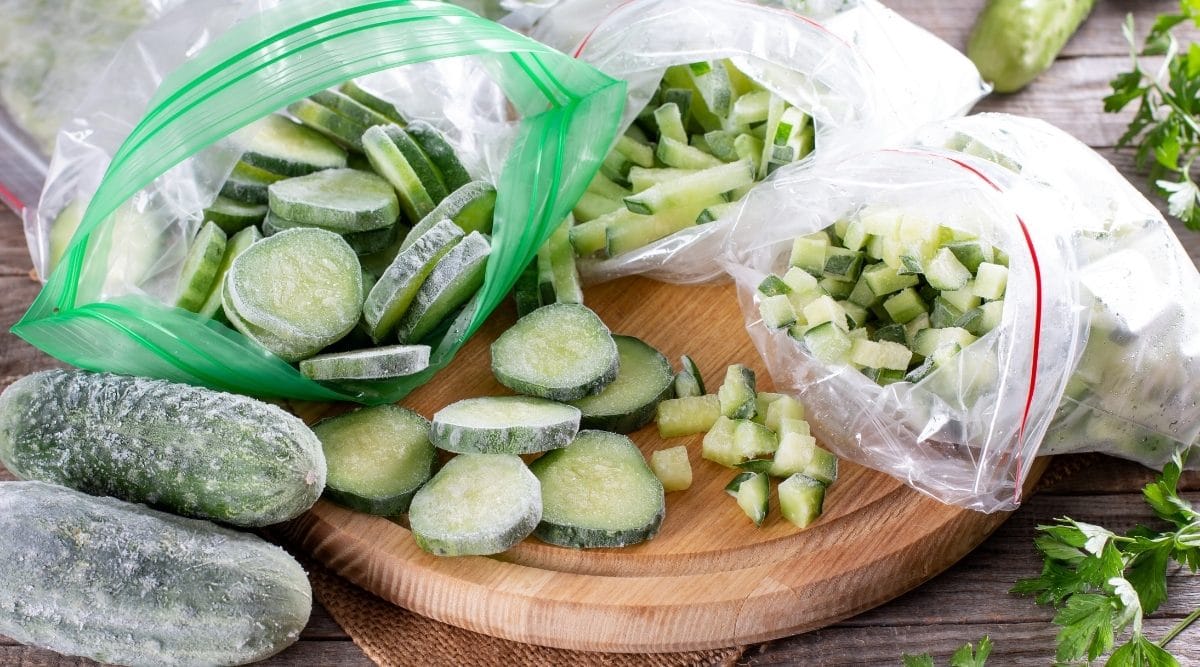 Cucumbers grow in your garden throughout the entire summer, and they’re not one of those crops that becomes easily lost to pests. That means you often end up with an abundance of them, and nobody wants to see their cucumbers rot after all the hard work it took to grow them.

However, cucumbers have a high concentration of water, and that’s where many questions typically come into play.  Can you freeze cucumbers after harvest? This article will teach you all about it, as well as how long they’ll last.

Brine Solution Instead of Blanching

If you want to avoid turning your cucumbers into a mushy mess, then you can’t use the regular ice water and boiling blanching method. Instead, you’ll use a brine solution during the freezing process.

As you prepare to freeze cucumbers, keep in mind that it’s easier to use smaller cucumbers. Look for a selection of cucumbers that measure out at about five or six inches and use them for this purpose.  The cucumber variety really doesn’t matter, as most will freeze just the same.

Most cucumbers bought at the store get coated in wax. Wash them off with a bit of detergent to get rid of the wax. It’s more effective to use cucumbers from your garden or even from a local community garden. Simply wash homegrown cucumbers with water as you get started with the brining process.

If you have an abundance of well-fertilized cucumbers after this season’s harvest, there are a few items you’ll need before you start freezing them. Here’s what you’ll need to complete the job:

Slice the cucumbers into even pieces. You’ll want one onion for every two quarts of sliced cucumbers. Slice up your onions next. In the bowl, lay out the onions and cucumber. Sprinkle one to two tablespoons of salt evenly on the cucumbers and onions as you build layers in the bowl.

Let the bowl sit for at least two hours after covering it with the plastic wrap. Using cold water, now rinse off the cucumbers and onions in the colander. Your goal is to get rid of all the salt. Put the mixture back into your bowl.

Measure out a cup and a half of sugar and a half cup of white vinegar. Combine the vinegar and sugar in a smaller bowl. Next, stir as you pour the sugar and vinegar over the cucumbers.

Use your freezer containers, jars, or bags as you ladle the cucumbers in. Leave some room at the top because the cucumbers will expand as they freeze. Put your containers into the freezer and wait for time to do its thing.

Two other ways exist that allow you to freeze cucumbers, and they’re simple methods. Let’s take a look at both and see which one is the better option, depending on what kitchen tools you have at your disposal.

Growing cucumbers is a great activity when getting your children into gardening, but making frozen cucumbers out of ice cube trays can be just as fun! Yes, you can also use ice cube trays to freeze your cucumbers.

To start, Slice the cucumbers into cubes. Make sure each cube is small enough to fit two cubes into each chamber of the ice cube tray.

Add water to the ice cube tray just like you do when making regular ice cubes. Ensure that each cucumber is completely immersed in water, place the trays in your freezer, and wait for everything to freeze.

Use a Baking Sheet

Do I Need to Peel the Cucumbers Before Freezing?

You can do it either way. If you prefer to eat cucumbers with the skin still on, then it’s perfectly fine to freeze them with the skin intact. Peel the cucumbers before freezing them if that’s your preference.

Can you freeze cucumbers after harvest? You sure can, and now you know how to do it.

How to Thaw Frozen Cucumbers

If you performed the first method above with the brining process, you don’t need to worry too much about the high water content in cucumbers as you take them out of the freezer to thaw.

Take the container or jar with the brined cucumbers out of the freezer and transfer it to the refrigerator. Allow for at least 24 hours when defrosting cucumbers this way. It’s a good idea to place the cucumbers inside the refrigerator door or any other zone in the fridge that keeps a temperature of about 40 degrees Fahrenheit.

Ensure the cucumbers in brine remain frozen for about two weeks before removing them from the freezer for thawing.

On the other hand, you should think about the liquid that thawed cucumbers might release if you used the ice cube trays or baking sheet to freeze the cucumbers,

It depends on what you’re using the cucumbers for when thawing them from the baking sheet or ice tray method. Thaw the frozen cucumbers in a bowl either in your refrigerator or on the counter if you plan to use them for gazpacho, for instance. However, if you’re flavoring your drinking water, you can simply put the frozen cucumbers directly into the water to thaw.

How to Use Frozen Cucumbers

Frozen cubed cucumbers work well when blending them into sandwich spreads, such as cream cheese, and dips. You can also add cucumber into:

Take frozen slices out and eat as a quick snack. Like the cubed variety, you can also blend the slices into cucumber water, green juice, chilled soups, smoothies, and scattered onto sandwiches for lunch.

Slices make for an easy way to freeze cucumbers because they’re easy to take out to thaw and use.

How about using your frozen cucumbers for a nice refreshing facial mask? Of course, you wait until they’ve thawed out first! Then, puree them in your blender or food processor.

Or, you can puree them before freezing, take them out, wait for them to thaw, and then use them as your facial mask. Either way, it’s a quick and easy way to find a quality facial mask substance. The only trouble with it is the cleanup necessary after dirtying up your blender or food processor.

Is there an easier way to freeze cucumbers, so they’re ready for smoothies?

Is it OK to freeze cucumber juice?

It’s not the best idea to freeze fresh juice. It’s better to store juice in your refrigerator and use it relatively soon after placing it there. Juices should stay fresh to reduce oxidation.

Is it possible to freeze cucumbers without using the blanching method?

Yes, it is. We explained three different ways to freeze cucumbers above, one of them being the brining method.

Is it OK to eat frozen cucumbers?

Yes, of course! That’s the entire reason why you freeze cucumbers in the first place. When your garden supplies you with too many at harvest time, and you’ve given away as many as possible, then you need a way to save the extras for a later date. Freezing them is the perfect way to accomplish your goal.

How long can you keep cucumbers frozen in the freezer?

Leaving them frozen for eight to twelve months is a good rule of thumb. Take them out and eat them within that timeframe to ensure their freshness. You’ll have another harvest next year anyway, so eat them up while you have time to do so.

Well, what do you think? You now know the answer to, “can you freeze cucumbers after harvest?” You also know that frozen cucumbers can last for up to a year in the freezer.

This should make you feel much better while going about your gardening each spring and summer. There’s no need to worry that you might plant too many cucumber plants and end up wasting your harvest.  The only challenge might come when you realize you need to buy yourself an extra freezer to store that harvest.

31 Different Types of Plants That Will Consistently Attract Butterflies

Edible Ground Cover: 11 Plants That Will Foodscape Your Yard or Garden

Types of Peas: Different Pea Plant Varieties To Grow in Your Garden 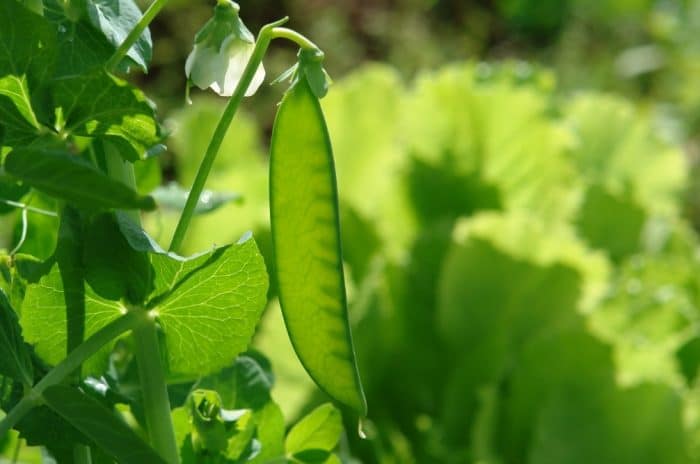 31 Different Types of Plants That Will Consistently Attract Butterflies

Trying to find the perfect plants or flowers to plant in your home or garden to attract butterflies? Butterflies can have a wide number of different benefits, especially for pollination purposes. There are a number of different plant species that will have these beautiful insects flocking to your yard. In this article, we examine some of our favorites.

Edible Ground Cover: 11 Plants That Will Foodscape Your Yard or Garden

Looking for some edible ground cover to help fill in some areas of your garden or your yard? These 11 plants will help fill in the blank space, while providing some beneficial edibles at the same time. Gardening expert Madison Moulton examines her favorites, and what you can expect when planting any of these edible plants as groundcover.

How to Plant, Grow, and Care for Jackfruit in Your Garden

Thinking of planting some jackfruit trees in your backyard, or somewhere in your home garden, but aren't sure where to start? Jackfruit can be a unique tree to grow, but they do best in certain hardiness zones, and perform well with certain soil types. Find out how to plant, grow, and care for Jackfruit in your backyard or home garden.

How to Plant, Grow, and Care for Sugarcane in Your Garden or Yard

Thinking of growing sugarcane in your garden, backyard, or somewhere near your home? This miraculous plant has many different uses outside of being a sweetener for many different types of food. However, it's not the easiest plants for novice gardeners to use to earn their green thumbs. Learn all you need to know about how to plant, grow, and care for sugarcane plants.