Blue Orchids: Are They Real Flowers? Do They Exist Naturally?

Many gardeners look for that single flower that will set their garden apart from others. For some people, that's finding a flower of a unique color. Few flowers are more beautiful than orchids, and blue flowers are some of the most sought after. So what about blue orchids? Are these flowers actually real? Do they exist without being modified? Gardening expert Madison Moulton gets down to the nitty gritty details in this article. 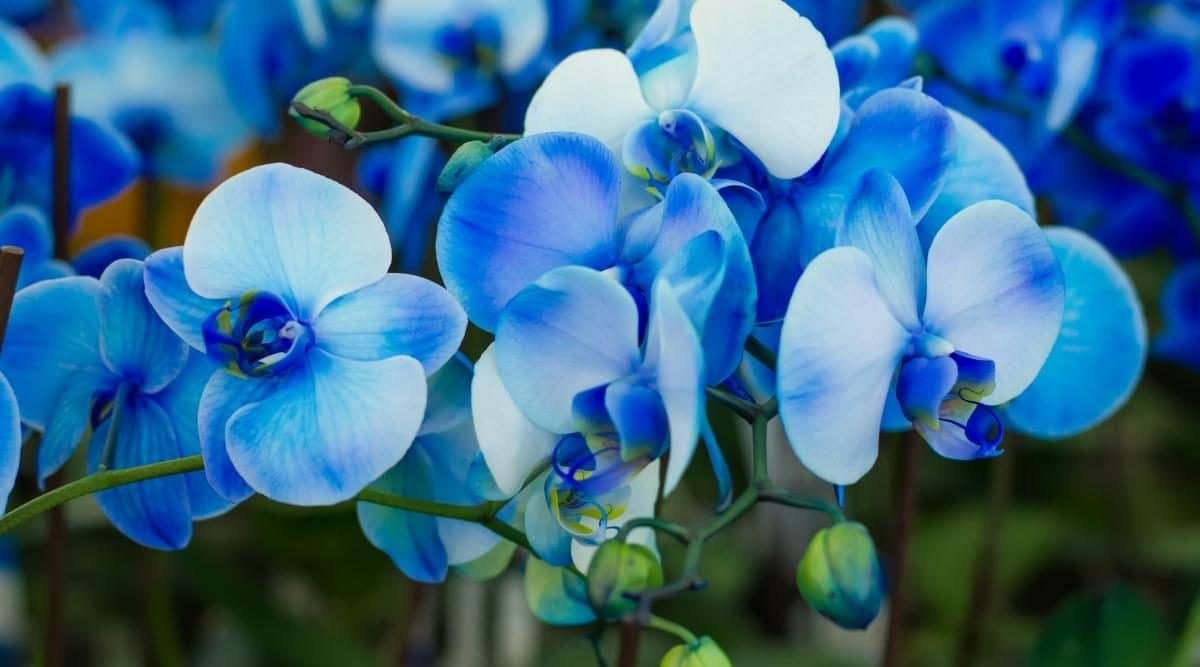 The natural world is packed full of plants with a massive range of weird shapes and incredible colors. When it comes to flowers, one of the weirdest shapes has to be the ever-popular orchid, a plant so beloved that it has spawned thousands (possibly millions) of fanatics and fan clubs across the world.

When it comes to color, the one gardeners always seem to look out for is blue. Blue is curiously absent in the natural world, leading us to covet any plants with a tinge of blue.

So, what happens when you put these two things together? You get blue orchids – a very rare and captivating phenomenon shrouded in mystery. Do true blue orchids really exist? Are blue orchid flowers real? Let’s find out.

Why Do We Love Blue Flowers?

Blue flowers are a rare find in the natural world. Only a small proportion of all known plants around the world contain blue pigments. Others may look slightly blue, but are actually purple, or only have a blue coating that makes them appear that color.

Only 10% of flowering plants are blue, making it a rare and coveted color. The key to this rarity is an organic compound called delphinidin. Delphinidin is an anthocyanidin, or plant pigment, that makes some flowers like delphiniums blue. It is also present in grapes, cranberries and pomegranates.

That doesn’t mean flowers can’t become blue. With some genetic alteration or hybridization, many cultivars of popular plants now produce blue flowers. However, they won’t be blue if found in the wild, and plants grown from seeds of that same plant will likely produce different colored flowers.

In other cases, flowers may appear blue with other modifications like dye or paint. Some of these are obvious, such as paint that has a certain unnatural texture. But dyed flowers usually appear quite real and are often marketed as ‘rare’ blue flowers to unsuspecting customers.

Are There True Blue Orchids?

With all these factors to consider, the important question is – do true blue orchids exist? And the answer is a definite yes. And a no, but we’ll get to that later.

There are very few orchid species that are blue in color, but they do exist. Most are very rare, meaning you won’t find them in your local garden center – if you ever come across them at all. One is more widely available than the other, but is still quite hard to find and very difficult to care for.

For an example of a rare blue orchid found in the wild, we have the Blue Lady orchid, Thelymitra crinite. This orchid is native to a small southwestern area of Western Australia. It is probably the bluest orchid around, and possibly one of the bluest flowers you can find.

There is no mistaking the color of this adorable, delicate flower. Many ‘blue’ flowers lean more towards purple, either light or dark, but this one is 100% blue.

It grows along coastal areas or around forests, sometimes near swamps. It is quite common in the small region of Australia it grows in, not endangered or too rare, but it is almost impossible to find and difficult to purchase anywhere else in the world.

The most well-known blue orchid, and one you may have a chance of spotting, is Blue Vanda or Vanda coerulea. Unfortunately, as they are so sought after, you may have to join in on a bidding war, pry it from another buyer’s hands, or steal one to actually get the chance to grow and keep one.

Vanda coerulea was first discovered in 1837 by botanist Dr. William Griffith in Northeast India. He found this stunning blue flower along the river valleys south of the eastern Himalayas and decided to bring it back to England to study. Unfortunately, the nature of this finicky flower meant it died on the journey.

Another botanist made the same discovery several years later, Joseph Dalton Hooker. This discovery was described in a quote from the book The Enchanted Orchid:

“Near the village of Larnac, oak woods are passed in which Vanda coerulea grows in profusion, waving its panicles of azure blue in the wind. We collected seven men’s loads of this superb plant for the Royal Botanical Gardens at Kew, but owing to unavoidable accidents and difficulties, few specimens reached England alive.”

Since then, the plant has been further studied and found in areas from this region all the way to south-eastern China.

The Blue Vanda is native to Asia, found in parts of India, Myanmar, Thailand and China. It has delicate, narrow-petaled flowers that stand large and proud on tall flower spikes. They typically attach themselves to small trees with little foliage, sporting 20-30 flower spikes with long-lasting blooms.

Due to its blue hue, this species is used by botanists and horticulturalists to develop new blue orchid cultivars. Studies have shown the flowers can also be used in eye drops to treat eye problems like glaucoma. The compounds within the flower are also believed to have anti-aging properties.

Are There Other Blue Orchids?

You may be surprised to find only two orchids on this list. You may be even more surprised to hear about their rarity if you’ve come across many blue orchids in stores near you.

But, as pretty as they are and as realistic as they may look, the commonly found blue orchids – usually phalaenopsis – are not actually blue. They appear blue thanks to the blue dye injected into the stem of the plant. As the plant takes up water with this dye, the flowers turn a shade of blue within a couple of hours.

You can usually spot dyed orchids if you look closely. The color of the flowers will appear unevenly distributed. They may also be a very vivid blue or an intense pastel blue that isn’t found in any orchids, let alone phalaenopsis.

The original flowers are usually white in color, which allows the dye to completely take over. This dye will stick around in the flowers until they fall off. Any flowers that emerge after that will be white – the original color.

This may seem like a harmless practice to some, but it can trick unsuspecting gardeners into paying far more for a plant that is, underneath all the dye, a regular phalaenopsis orchid.

For example, a few years ago, a blue phalaenopsis orchid called Blue Mystique was marketed as the first-ever blue phalaenopsis. That drove up the price of the plant, with many purchasing it in excitement, only to find that the new blooms emerging from the plant were white with no hint of blue in sight.

Any blue orchid you come across at your local store will likely be a dyed blue orchid. Keep an eye out at specialist orchid growers for true blue orchids like Blue Vanda if you want the real thing.

Are The Flowers Real?

The dyed orchids – not just in blue but in many other vivid colors – lead some to believe the flowers are not real. However, that isn’t the case. They are 100% real flowers, they just aren’t naturally occurring flowers.

The plant still functions as any other phalaenopsis does, requiring the same care. They need a root drench approximately once per week, bright indirect light and regular applications of fertilizer to grow successfully. If you want the plant to flower again – even though the flowers might not be blue – you’ll need to cut back the flower stalks and ensure it is in the right temperature and humidity conditions.

The same goes for any dyed orchids you come across in stores. These plants and their flowers are still completely real, they just look slightly different from how they exist naturally, without human intervention.

Blue orchids are absolutely stunning, unlike any other orchid on the market. Unfortunately, they are usually not naturally grown that way. Most we see in person are merely dyed blue, even if they aren’t marketed as such.

However, that doesn’t mean they don’t exist in nature. The Blue Vanda orchid is the most common, but Thelymitra Crinite also sports a blue hue out in the wild bound to catch any passer-by’s eye.

Growing Rudbeckia: How to Plant, Grow, and Care For Black-Eyed Susans

How to Plant, Grow, and Care For Globe Amaranth

How to Plant, Grow, and Care For African Violets

If you recently planted some African Violets in your garden, in some pots, or around your home, you may be wondering about the best way to care for them to ensure their survival and growth. In this article, we take a deeper look at each step you should take when caring for these plants, no matter where you've planted them around your home. 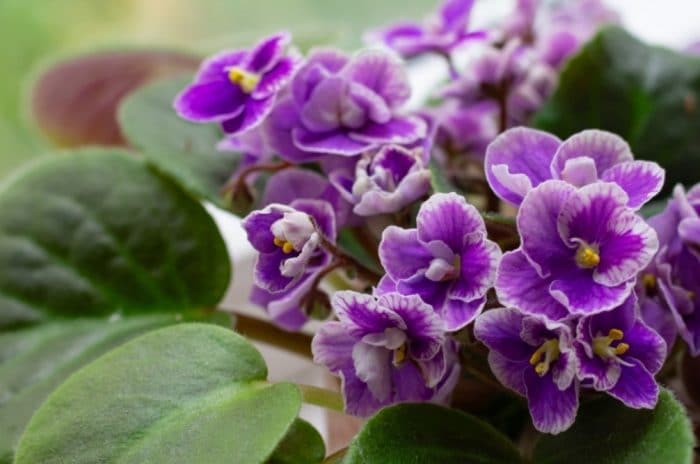 Growing Rudbeckia: How to Plant, Grow, and Care For Black-Eyed Susans

Rudbeckia is a flower that many gardeners are familiar with. But they usually call them by their more common name, the Black-Eyed Susan. These flowers are easy to grow, and bring a splash of beautiful yellow and black coloring to any garden bed. In this article, gardening and flower expert Taylor Sievers explains how to plant, grow, and care for Black-Eyed Susan flowers.

If you are looking to go a little darker in your gardening theme, it's only natural to consider adding some black flowers to your home or garden. It's always crucial to find the right balance to any garden when it comes to color, which is why we always recommend a variety of different flowers and colors. In this article, we take a deeper look at some of our favorite black flowers to add a little mystery to your gardening area or home landscape.

How to Plant, Grow, and Care For Globe Amaranth

Are you looking for some new flowers to brighten up your garden bed? Globe Amaranth may be just the trick! These beautiful flowers can liven up any garden space, but they do have a few needs to satisfy before you'll get a perfect bloom. In this article, gardening and flower expert Taylor Sievers examines how to plant, grow, and care for Globe Amaranth.

Are you looking to brighten up your yard with some red flowers, but aren't sure which flowers will be the best for your home or garden space? In this artlcle, we look at 61 of our favorite options to add some additional color that will match just about every season!

Are you looking for a bit of fall color in your garden beds? Asters are your answer. These stunning perennials are popular across North America, especially in pollinator gardens. Plant one variety, or choose several of the hundreds in this genus and plant family for a garden full of wildlife and color throughout summer and fall.

Are you looking to add some green flowers to your garden, but aren't sure which ones might look the best? There are many different flowers that are green when they bloom, but not all are well suited for every climate or geographic location. In this article, we take a look at our favorite flowers that are green in color, and will look fantastic in gardens, in just about every hardiness zone.